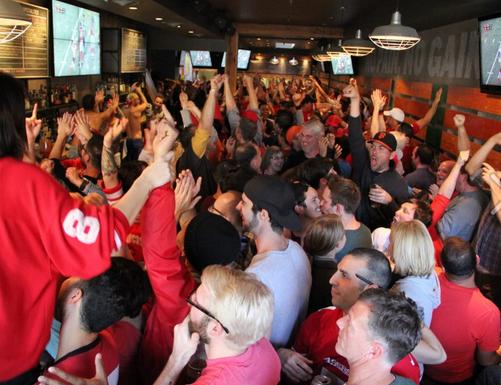 Would there have been a better time for an explicitly gay sports bar to open in SF than late 2012? You can bet your sweet basketballs there would not. First the Giants win the World Series, packing Castro’s spanking new Hi Tops with fans eager for some specialty drafts, juicy burgers, and same-sex camaraderie. The Niners hit the Super Bowl, and a groundbreaking pic of kissing male fans in Hi Tops’ gorgeously retro ball-court-locker room interior runs in Sports Illustrated. And now, with the Warriors in the playoffs, two major league basketballers, Jason Collins and Brittney Griner, have come out in very big ways.

But the plan behind Hi Tops’ phenomenally successful concept took several years to come to fruition — in these economic times, a gay sports bar was a bit of a tough sell, even in the Castro. Jesse Woodward, who owns the bar with Dana Gleim and Matt Kajiwara, told us back in November that he wanted to help “reinvigorate the neighborhood’s potential by opening it up to different crowds, while still respecting its heritage.” Hi Tops draws a mixed crowd of sports enthusiasts with its large-screen TVs and inventive bar menu. But it also attracts those who don’t consider themselves sports fans, through its relaxed vibe, creative cocktails, and general sense that this is the cool place to be. Also, it’s usually full of hotties.