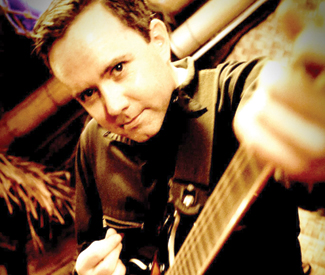 TOFU AND WHISKEY Why don’t more surfers listen to surf music? I found myself in one of those fuzzy-eyed, web-based black holes, frustrated, rhetorically asking the question through the endless prism of social media a few months back. And furthermore, why don’t surfer-musicians play authentic surf rock? While the sound was born in Southern California in the early 1960s, most of the early musicians who incorporated it weren’t active participants in the sport for which it was named, save for Dick Dale. The oft-repeated story is that Dale wanted to reflect the sounds he heard in his mind while surfing. And around that time, Santa Ana, Calif. based guitar-maker Fender even ran ads with beach babes and the tag “Fender makes music to surf by.”

But in the past few decades at least, the more prominent surfer-musicians seem to mostly vacillate between producing pop-punk, reggae, or more commonly, your ubiquitous, folky, banana pancake-loving Jack Johnson boredom block.

Tom Curren is in an elite class, a world champion surfer and son of legendary big-wave rider Pat Curren, he’s an athlete who took all his souped-up energy, and left his sport to pursue…folk rock. He released first album In Plain View in March.

During an ancient ritual in which I participated last week — that would be my honeymoon on Oahu — the bus drivers, tour leaders, cabbies, and general friendly tourist industry folks kept offering up slice-of-life songs for our listening pleasure. You like music? Well, get a load of this beach-ready sound. Cue soft rock (Hawaiian-born) Jack Johnson, or, the late Honolulu singer-ukulele musician Israel “Iz” Kamakawiwo’ole. We heard Iz’s “Somewhere Over The Rainbow/What A Wonderful World” medley no fewer than 15 times in seven days. I asked my husband, who grew up surfing on the Central Coast, what was up with the surfer/surf rock divide and he quietly responded, “I’ve never participated in surf culture, I have no idea.”

When I returned to work this week, I asked local surf musician Donald Bell of Aloha Screwdriver a similar question, and he shut it down more academically, “I can’t speak for surfers. I don’t surf. I grew up skateboarding. I don’t know a single one of our fans who surf. What’s funny is that our biggest fans live in the gloomiest climates. We have a bunch of fans in Seattle.” He added, “I think that Californians have a kind of cultural cringe when they hear surf music, because it’s the kind of thing that always gets played in the background whenever a California beach scene is shown on TV. It can feel cliché. But once you get outside of California, that baggage tends to disappear and you get treated like an exotic import.”

Bell got it though, what I was after. I wanted the explosive electric guitar of Dale and the Trashmen, the wet noodling power of ’90s revival acts like Phantom Surfers and Man Or Astro-Man?, or powerful throwback shock of Guantanamo Baywatch or Trashwomen (those last two, by the way, will play the Burger Boogaloo fest July 6-7 in Oakland). OK, so Hawaii wasn’t technically the place to find the thriving surf rock stuff; if I’m being fair, I knew the style I desired wasn’t based there. Plus, I didn’t exactly plow through underground punk shows while visiting, being buried deep in the sand and fruity alcohol-based beverages and all.

So maybe it doesn’t matter if professional surfer-musicians are out there playing the music of their cultural ancestors, there’s still an avid fan base.

A week earlier, the husband and I walked down the aisle to the Ventures, “Walk Don’t Run” (“Pipeline” was considered but ultimately dismissed). See, this was the music I grew up loving. The vroom-vroom-vroom of wild guitar riffs, heavy reverb, Eastern scales, rapid and escalating drumming peaking, crescendoing, wiping out. Proto-beach punk.

“People forget that before the Beatles hit, surf music was once pop music in this country. Right now, pop music is very focused on a synthetic sound, but everything comes back around,” Bell says.

And there will be a fix of the good stuff nearby this weekend, at radio station KFJC’s Battle of the Surf Bands benefit (Sat/18, noon, $10, all ages. The Surf Spot, 4627 Coast Hwy., Pacifica. www.kfjc.org). Bell’s Alameda-based trio will play the yearly event for the second time. And the 16-band battle also includes Beachkrieg, Deadbeats, Mighty Surf Lords, Tomorrowmen, Frankie and the Pool Boys, Meshugga Beach Party, and more surf acts with cheeky names. The event benefits the station itself, and also will be broadcast using Live Cam.

Given that it does often feel like a maligned art form, the abundance of traditional surf bands participating every year at KFJC’s event (now in its sixth year) seems surprising.

“There are probably more surf rock groups in the Bay Area than any other location in the world,” Bell says, naming off many that will play the battle, and beyond. “A lot of that has to do with the continued support of KFJC and DJs like Phil Dirt and Cousin Mary who really championed the genre…I formed my first surf band when I was 16, and Dirt brought us into the studio to play live on the air for 30 minutes. It was crazy to have that kind of outlet. It’s unheard of.”

Now in his early 30s, Bell has continued to play in surf bands with his musician friends from high school — drummer Steve Slater and bassist Grant Shellen. They grew up together in Fremont and that’s where they formed that first band: Chachi, Boba Fett and the Wookiee. Bell says he initially found the genre through the surf revival acts of the ’90s like the Phantom Surfers and Shadowy Men on a Shadowy Planet, but then, once he was hooked, he tumbled backward toward the Ventures, Link Wray, the Shadows, and of course, Dale.

Aloha Screwdriver began in ’09, and the trio plays all instrumental music. “Sometimes it veers into rockabilly or like a Ennio Morricone spaghetti western vibe, or even like a Disney Haunted Mansion feel, but I’m always holding our songs up to this idea that they could carry a Tarantino-worthy action sequence.”

Listen to Myron and E’s single “If I Gave You My Love” and you’ll start to feel some involuntary movements, your head bouncing in agreement, shoulders shimmying side to side. It’s the nature of the solid gold soul beast. The duo was recently signed to tastemaker Stones Throw, and will release newest album Broadway, backed by Timmion Records house band the Soul Investigators, on the label July 2. With a handful of 45s already out there, the two — Bay Area bred Myron Glasper and Eric “E da Boss” Cooke — have successfully maneuvered an authentic soul sound that’s at once smooth and celebratory (with the help of some well-placed horns). The duo, which met on tour with Blackalicious, stops by Berkeley this weekend for the East Bay Soul Stomp 2. With Bang Girl Group Revue, New Love Soul Revue, DJ Derek See, DJ Der.

The first thing you need to know about Black Pus is that it’s just a looping Brian Chippendale — he of Lighting Bolt fame. For this project, the madman drummer (and forever art-school kid at heart) uses percussion, a triggered oscillator, and those echoing, distorted Lightning Bolt style vocals you’d expect. Most tracks sound like a spaceship lifting off and exploding into starry darkness, repeatedly. With CCR Headcleaner, Reptilian Shape Shifters.