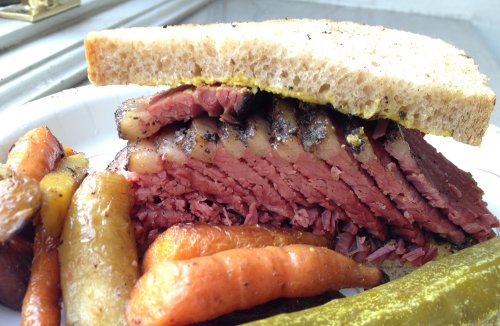 THE BLOB We so very want to love the brand new Sydney Town Tavern (531 Commercial, SF. www.sydneytownsf.com) in the Financial District, named after a roving gang of Australian, Irish, and English convict-rogues who terrorized the Barbary Coast. The Blob certainly loves a bad boy or five! The pedigree is right: Syndney Town is sister to Irish Times, right around the corner. And the drinks are nice — a huge, like pint-glass huge, pomegranate margarita will solve any afternoon problems, and a refreshing orange crush replicates an Orangesicle, though not too sticky-sweet. But the menu falls too much on the typical gourmet bar snacks side, executed not-so-stellarly: fish was leathery and its chips were a droopy few; meatballs were firm but unmemorable; truffle mac and cheese was dry and pasty. Channel your namesake and do something naughty, Sydney Town Tavern!

PS: Cherries are amazing right now; grab some at the farmers market this week.

A+ DEEP GREEN FROM JUICE SHOP

Friends, we are living in an era of $9 juice. There’s a complex story behind the founding of Juice Shop by brothers Charlie, Ben, and Jake Gulick (and Charlie’s wife Linda) involving miraculous liver cleansing, which we won’t relate here, because “liver cleansing.” We will relate, however, the taste of our glass-bottle pint of cold-pressed, unpasteurized, kale-parsley-spinach-romaine-etc. A+ Deep Green juice, purchased at a rustic-cute streetside stand in the FiDi (there’s one in Cow Hollow, too): “Deeep Greeen deeelightful. Immediately, the Blob was ready to conquer her day — probably aided by some sort of squeaky super-clean hyper-liver.

Other options include Coco-Clorophyll, pineapple pear chia, Alpha Green, Beta Beet, and apple lemon ginger. Juice Shop will also program an entire 1-10 day cleanse to suit your needs, including an array of juices, plus aloe and blue-green algae, starting at $62. Has there ever been a kickstarter for a personal cleanse?

PASTRAMI ON RYE AT SHORTY GOLDSTEIN’S

So long ago seem the days when the concept of gourmet Jewish deli food was unconcepted, and that cute guy with the dreads from Wise Sons was hawking chocolate babka out of a hand cart on Ferry Plaza. Wouldn’t you know it, here we are, digging with both hands and a fork into the mountain of meat Shorty Goldstein presents as a pastrami on rye ($12). Lean is definitely not the byword here, with thick, peppery, fat-laced slices piled up like brisket on solid, if completely overwhelmed, rye (mustard and accompanying pickle provided). The Blob cannot lie — it took her two days to finish this giant, which comes out to $6 per lunch. Not bad, and helps explain the lines down the street.

As if that were not recommendation enough, when we showed a picture of said sandwich to our very Jewish uncle from the East Coast, he grunted in condescending amusement, which in old-school East Coast Jewish terms is the closest any gourmet West Coast deli food is going to come to approval, so what’s to complain?

We piled on a hefty side of farm fresh veggies as a treat ($5) — that day it was rainbow carrots roasted with a hint of mint. Other sandwich options include exactly what you’d expect: corned beef (every day), egg salad (Mondays), beef tongue (Thursday), etc. Go eat, already.

Let’s waltz out of the Financial District and its parade of newbies, and right into SoMa for an old favorite, Walzwerk, which was hopping on an early Sunday evening. (If there’s ever a time for wonderful, heavy East German food, Sunday dinner time is it.) The Blob had not been there for at least one historico-dialectical cycle, but the giant etchings of Marx, Engels, and Lenin on the walls still amused, the fabulously direct waitress remembered us, and the German Democratic Republic memorabilia remained fascinating and somehow hilarious.