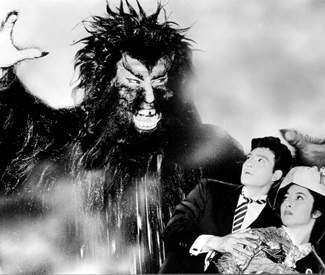 FILM Long before VHS demon Sadako glared one eye through a tent of tangled black hair in 1998’s Ring (American viewers may switch that to “Samara” and “2002”), another angry, swampy-coiffed dame was doing her best to scare the bejesus out of ticket buyers. The year was 1825, and the kabuki play was called Yotsuya Kaidan. Ghost Story of Yotsuya, the 1959 version of that oft-filmed tale — which contains visual motifs made famous by J-horror — kicks off the Yerba Buena Center for the Arts’ titillatingly-titled “Girls! Guns! Ghosts! The Sensational Films of Shintoho” series (Thu/9-May 26).

Exploitation specialist Shintoho is often described as “the Japanese American International Pictures,” with output likened to Roger Corman’s oeuvre. The comparison is apt, what with the overlapping timelines (Shintoho was active from 1949-1961) and shared love of low-budget productions chockablock with daring, sleazy, violent, racy, and otherwise beyond-the-mainstream themes. Most of the films in “Girls!” are under 90 minutes, and a good portion of them are even shorter. Ghost Story of Yotsuya, directed by prolific Shintoho hand Nobuo Nakagawa, clocks in at a pulse-pounding 76 minutes.

It opens on a kabuki stage, with a macabre song hinting at what’s to come: “the greatest horror there is,” we’re warned, is “the fury of a woman maddened.” Though it takes nearly an hour to get to payback o’ clock, that allows plenty of time to pile up just cause: sleazy samurai Iemon woos pretty, naive Iwa (played, respectively, by studio faves Shigeru Amachi and Katsuko Wakasugi) after killing her suspicious father and shoving her sister’s beau over a waterfall. Unsurprisingly, he makes for a cruel, manipulative husband, using his wife for gambling collateral and feeding her “medicine for your circulation” once a younger, richer girl captures his attentions. The poison does a Phantom of the Opera-style number on Iwa’s face before hastening her death. “I will visit my hatred upon you,” Iwa’s pissed-off ghost declares, and boy, does she — no VCR required.

More cranky spirits populate Ghost Cat of Otama Pond (1960), which leans heavily on (blood) red and (supernatural) green lighting effects to weave its tale of, again, revenge from beyond the grave. This time, it’s revenge so patient it waits generations to cause havoc, cursing a contemporary woman who stumbles into an abandoned house when she and her fiancé keep tracing the same route through the woods in a Twilight Zone-ish frame story. (Pro-tip: maybe don’t declare, “I hate cats!” when you encounter one with witchy powers.) A flashback to centuries prior explores a feud between two families that encompasses forced marriages, haunted hairpins, horrific fires, bodies tossed in the titular pond, and a monster that takes on an oddly feline form.

Of course, not all of Shintoho’s films were period-pic screamers. A trio of black-and-white “Girls!” selections embrace pulpy, seedy, noirish characters and situations. Nakagawa’s Death Row Woman (1960) begins, ominously, as a posh family goes duck hunting. (“You could kill a person!” someone remarks of another character’s shooting skill.) Rebel daughter Kyoko (Miyuki Takakura) doesn’t want to marry the man her father has picked out for her — but her stepmother and stepsister are none too pleased with Kyoko’s own choice, for different reasons. When Daddy Dearest suddenly croaks, it’s a death sentence for Kyoko — who is actually guilty only of being shrill pain in the ass. Lightly lascivious woman-in-prison scenes (this isn’t 1983’s Chained Heat or anything) are followed by a daring, Fugitive-style escape, though ain’t nobody getting justice without suffering through a vat full of melodrama first.

Even more entertaining are the two films in “Girls!” directed by Teruo Ishii: 1958’s Flesh Pier and 1960’s Yellow Line. Both make great use of back-alley characters, with fedoras and fishnets to spare. Flesh Pier‘s action is set in Ginza, as an undercover cop who’s in love with a burlesque dancer investigates the city’s “trade in flesh;” also undercover is a female reporter hoping to get a big scoop on same. (This film contains a fashion-show scene in which nightie-clad models smoke cigarettes on the runway.) Meanwhile, Yellow Line follows a moody hitman (Amachi again) who kidnaps a dancer (a sassy Yoko Mihara) and drags her to Kobe’s red-light “Casbah” district, with her newspaper-reporter boyfriend in hot pursuit. (This film contains a hooker named “the Moor,” played by a white actress in blackface.)

Not available for preview, but likely as mind-blowing as any and all of the above: Michiyoshi Doi’s The Horizon Glitters (1960), described as a “black comedy about a prison break gone wrong;” Toshio Shimura’s 1956 Revenge of the Pearl Queen, about a bodacious, ass-kicking female pearl diver played by Michiko Maeda (a.k.a. “the first Japanese actress to appear in a nude scene in a mainstream film” … this film); and Kyotaro Namiki’s Vampire Bride (1960), in which a scarred young dancer transforms into a horrific, hairy beast. If a picture says a thousand words, the widely circulated still from this film positively shrieks them.