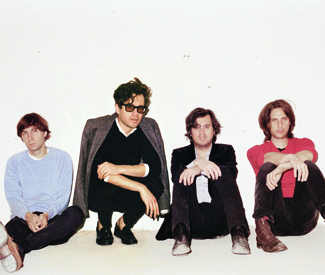 MUSIC It was a case of the French pop love that dared not speak its name, as earlier this month rumors roiled about a Coachella coupling — mon dieu, deux! — to truly rave about: headliner Phoenix along with possibly, just maybe, hush-hush special guest Daft Punk, returning to stage de triomphe that it dominated seven years ago. The Phoenix guest that materialized, R. Kelly, wasn’t exactly the faceless freak the audience had imagined springing from the closet, and instead the mob had to cool its jets and content itself with an old-school LP ad from Thomas Bangalter and Guy-Manuel de Homem-Christo.

The abbreviated 102-second spot saw the duo in glittery soft focus performing new single “Get Lucky” alongside Pharrell Williams and Nile Rodgers — the kind of clip you’d uncover on late-night TV during Don Kirshner’s Rock Concert — and announcing Daft Punk’s own special guest stars, including Giorgio Moroder, Panda Bear, past Daft Punk collaborator Todd Edwards, Paul Williams (who must have had Phantom of Paradise-tinged flashbacks), and Pharrell Williams. Just a taste, but enough to stir the pot in the lead up to the May 21 release of Daft Punk’s fourth studio full-length, Random Access Memories, on Columbia.

Is it so strange that Daft Punk and Phoenix should find their fortunes so intertwined out in the Cali desert, so far from Old World Paris and Versailles? After all, the two share a past — and a future: Phoenix guitarist Laurent Brancowitz, Bangalter, and de Homem-Christo all started out in a Beach Boys-inspired combo called Darlin’. And much like fellow French native Anthony Gonzalez’s M83, the two groups are managing to find creative juices to grease their wheels out west, in the fantasy industrial complex of LA — with Daft Punk stressing the importance of a West Coast feel à la Fleetwood Mac to Memories guest Edwards, and Phoenix telling MTV that its new CD, Bankrupt!, was inspired by its work on Thomas Mars spouse Sofia Coppola’s 2010 movie Somewhere.

Not to mention the fact that Bankrupt! and Memories are two of the most buzz-ridden releases of the year, particularly judging from the homemade “Get Lucky” remixes and videos already proliferating online. Long gone are the old rockist daze — the same that slurred “Disco sucks” — when French rock was derided as just another thing an entire country does wrong, like loving Jerry Lewis. Thoughts surely far from the minds of Daft Punk obsessives, though from the start the duo’s vocoder-obscured vocals and helmeted visages proudly proclaimed, “We’re alien, a.k.a. not from around here.” That tease is the name of Daft Punk’s space-rockin’ game this time around, taking control with a carefully orchestrated marketing campaign after a humbling day job scoring a sorry Tron sequel.

Working with its biggest crowd of collaborators yet, Daft Punk appears to be bursting the mythic bubble of an enigmatic twosome working solo behind the decks, letting others into the party, circling back to its clubland origins, and reaffirming that, as “Get Lucky” goes, its “ends were beginnings.”

And though indie seems leached of meaning, Phoenix sounds far deprived when it came to ideas for Bankrupt! Nate Chinen of the New York Times may quibble with Mars’s Dadaist “word salad” — why not attack a fellow for singing with an accent? — but then Phoenix isn’t the first band to privilege the sound of lyrics over content. Bankrupt! isn’t as “experimental” as promised early on, but it’s by no means as polished and predictable as your average Killers or Imagine Dragons product.

Starting with title and extending to the cover symbolism of a lucky peach, and the busy little rickshaw of an orientalist motif on opener “Entertainment,” Phoenix sounds as if it’s grappling with a Daft Punky notion of alien-ness, too — and the global economics of pop success, having hit it big at the height of an economic downtown with 2009’s Wolfgang Amadeus Phoenix. The distorted, bristling synths grinding beneath songs like “The Real Thing,” in fact, make Bankrupt! one of the noisier mainstream rock albums of recent years. Scope out the lonely cries of the entitled asking to have their names put on lists on “SOS in Bel Air,” the fluty synths opening the languorous “Trying to Be Cool,” and hear the sound of a band conveying the seduction — and anxiety — of too many bright lights, big cities, and marathon tours and responding by mainly turning up on the volume.

So why French pop and why now? In fits and starts, leaps and stumbles, Daft Punk and Phoenix are creating less a pop language of diplomacy than a kind of lingua franca between classic sunny pop hooks, Beach Boys style, and the all-mighty often-electronic groove, be it analog or digital, IDM or EDM, boyish or girlish, human or alien.

LPs like Memories hark to another time, while satisfying on the primal level of da funk. As Pharrell Williams has said of “Get Lucky,” “The only click track they had was the human heartbeat, which makes it really interesting because these are robots.” So how does the sunlit, smoggy terroir of the west touch two French aliens and a band of Versailles refugees? Perhaps we’ll know when Daft Punk unveils Memories even further out West: May 17, at the the 79th Wee Waa Regional Show in Wee Waa, Australia.