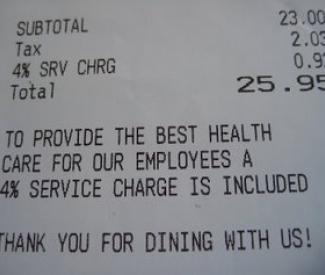 City Attorney Dennis Herrera today announced another batch of settlements with restaurants that have been fraudulently using surcharges on customers’ bills to cover their city-required employee health coverage and using some of that money to simply pad their profits.

Seventeen San Francisco restaurants that took advantage of Herrera’s partial amnesty offer — settlements are half of what the violators should owe, based on voluntarily submitting records by last month’s deadline — will be paying tens of thousands of dollars each to the employees’ they ostensibly collected the money for, joining two other restaurants that had settled with the city earlier this year.

Among this latest batch of restaurants is Burgermeister, whose $134,088 settlement is the largest of this group; and Burma Superstar, whose $10,045 is the smallest. Other restaurants paying up as part of the settlement are 5A5 Steak Lounge, Amber India, B Star, Bix, Cafe Bellini, Calibri Mexican Bistro, Citizen’s Band, Cafe Flore, Fresca, MarketBar, Nob Hill Café, Press Club, Skool, Tony’s Pizza Napoletana, and Venticello Ristorante.

There are still more than 30 restaurants that responded to the amnesty offer that remain in negotiates with Deputy City Attorney Sara Eisenberg, with more settlements expected in the coming weeks and the possibility of lawsuits being filed against restaurants that won’t settle.

Herrera praises good faith efforts by restaurants ‘to do right by their employees’; announces ‘clean bills of health’ for 12 other establishments targeted in investigation

SAN FRANCISCO (May 8, 2014) — City Attorney Dennis Herrera today announced settlement agreements with 18 local restaurant businesses that voluntarily took part in his office’s surcharge enforcement and amnesty program, which seeks to remedy shortfalls between amounts collected from customers to cover the cost of complying with San Francisco’s universal healthcare law, and funds actually expended to provide health care benefits to employees.  Together with an earlier settlement announced in January, Herrera’s restaurant surcharge enforcement effort has now netted a total $844,644 to be distributed among approximately 1,500 eligible employees by 19 different companies.

The program announced in January included a one-time 50 percent amnesty offer for establishments with significant shortfalls — provided they fully cooperate with city investigators; agree to good faith compliance with the employer spending requirement of San Francisco’s Health Care Security Ordinance moving forward; and directly compensate their current and former employees who were the intended beneficiaries of the surcharges paid by customers.  All agreements announced today resolve potential disputes with the City over collected surcharges without admissions of liability.

“I commend these businesses for working cooperatively with us so early in the process, and for understanding our duty to enforce the law even-handedly,” said Herrera.  “Today’s settlements reflect good faith efforts by restaurant owners and managers to do right by their employees, and to honor the intent of fees charged to their customers.  I recognize that complying with groundbreaking programs like Healthy San Francisco can sometimes present new and unique challenges.  So, I’m grateful to these businesses for their cooperation in reaching settlement agreements with us.  I’m glad to continue patronizing these establishments, and I hope other San Franciscans and visitors will join me in doing so, too.”

Twelve establishments receive ‘Clean Bills of Health’ following investigation
Herrera also announced that 12 businesses targeted for investigation on the basis of the health care expenditure shortfalls they reported to San Francisco’s Office of Labor Standards Enforcement had received “clean bills of health.”  Recipients of such letters were informed by Herrera’s office that after extensive review of additional evidence provided in the course of the City Attorney’s investigation, surcharge-related consumer fraud did not appear to have been committed during the relevant time periods.  In most instances, shortfalls reported to OLSE by businesses that received “clean bills of health” were attributable to their inadvertent reporting or accounting errors.

Surcharge Fraud Enforcement Program background
Herrera announced the program at a City Hall news conference on Jan. 25 with Assemblymember Tom Ammiano, Supervisors David Campos and David Chiu, and representatives from San Francisco restaurants and the Office of Labor Standards Enforcement.  Ammiano first authored legislation in 2005 as a member of the Board of Supervisors that would ultimately lead to the City’s Health Care Security Ordinance, or HCSO, which passed in 2007 with policy input from then-Mayor Gavin Newsom.  Board President Chiu and Supervisor Campos have both been active in subsequent proposed amendments to strengthen and improve the law.  In launching the enforcement and amnesty program, Herrera lauded the Golden Gate Restaurant Association for working productively to share its helpful input, even after years of legal disputes over the law that ultimately ended in the U.S. Supreme Court.

Status of enforcement efforts and investigation
In addition to the establishments involved with today’s announcement, more than 30 other businesses applied for Herrera’s amnesty program before the April 10, 2013 deadline.  The City Attorney’s Office expects a significant number of additional settlement agreements in the coming weeks, pending further analysis of surcharge funds that establishments collected and expended over the relevant time period.

Herrera’s one-time offer of 50 percent amnesty has now expired, and the favorable settlement terms are no longer guaranteed to non-participating establishments with significant shortfalls between health care-related collections and expenditures.  Announcing his enforcement and amnesty program in January, Herrera said that restaurants and other businesses found to have committed HCSO-related surcharge fraud during the years 2009 to 2011 that failed to come forward before the deadline voluntarily would risk being sued for full restitution of the amount of surcharges collected during that period, together with potentially substantial penalties, costs and attorneys’ fees.  A small number of defiant, non-participating businesses remain under consideration by the City Attorney for further enforcement action or litigation.

“For restaurants that haven’t yet come forward, it’s still very much in their interest to do so voluntarily,” Herrera said.  “I can’t guarantee the same favorable terms reflected in today’s settlements, but cooperative engagement is better and more cost-effective than lawsuits.”