Home Why the PG&E settlement is lame 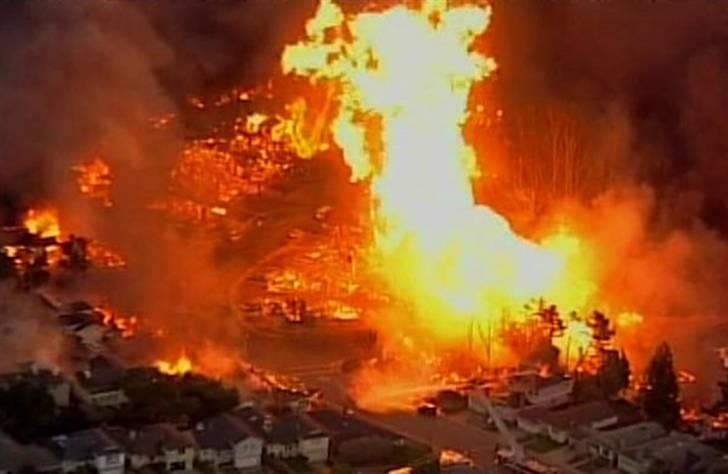 One of the factors that the state regulators took into account when they decided how much PG&E should be fined for the San Bruno blast was the company’s financial situation — that is, how much of a fine could the utility “safely absorb.” That’s the first sign that something screwy is going on here.

If I run a red light, the traffic court doesn’t ask how much of a fine I can “safely absorb.” A crook who embezzles money not only has to pay the money back, but suffer a financial penalty that can greately exceed what he or she can afford. A murderer doesn’t get to go before a judge and say, gee, two years in prison is all I can “safely absorb.” That’s not how it works.

PG&E is a giant company that has a guaranteed annual rate of return exceeding ten percent on everything it spends. It’s shareholders are large investment banks and stock funds. Its executives are very well paid. And gross negligence — that is, intential mismanagement at the level of criminal activity — on the part of the company led to the deaths of eight people and the destruction of an entire neighborhood.

The penalty ought to be MORE than the company can “safely absorb.” It ought to be enough to make shareholders wonder whether PG&E is a good investment. It ought to really, really hurt PG&E.

Instead, the CPUC staff is just telling the company to spend $2.25 billion doing what it should have been doing all along, and needs to do anyway: Fix the pipelines.

Sure, that money will come from profits, not from the ratepayers. But again, as the mayor of San Bruno pointed out on KQED’s Forum this morning, PG&E, as a regulated monopoly utility, has a guaranteed rate of return — and can borrow money at less than half that rate. The company reported revenues of $15 billion and profits of $830 million for 2012. PG&E seems to have plenty of money to fight CleanPowerSF and offer its own “green energy” program for less than the city will charge — and that’s guaranteed to be a money-loser, covered by some of those profits.

The CPUC ought to order the company to fix the pipes — then assess a fine high enough to wipe out all profits for, say, five years, which is how long it’s going to take San Bruno to fully repair the damage and recover from the explosion.

That would be a suitable “punishment.” Would it drive PG&E into bankruptcy? No — lots of companies operate with little or no profit margin these days. Let the killer utility cover its costs, do its job, pay its employees … and nothing more. The staff report is scathing; the penalty sounds stiff. But it’s not going to send enough of a message.