Home The Performant: The dame, the dick, and the dismembered torso 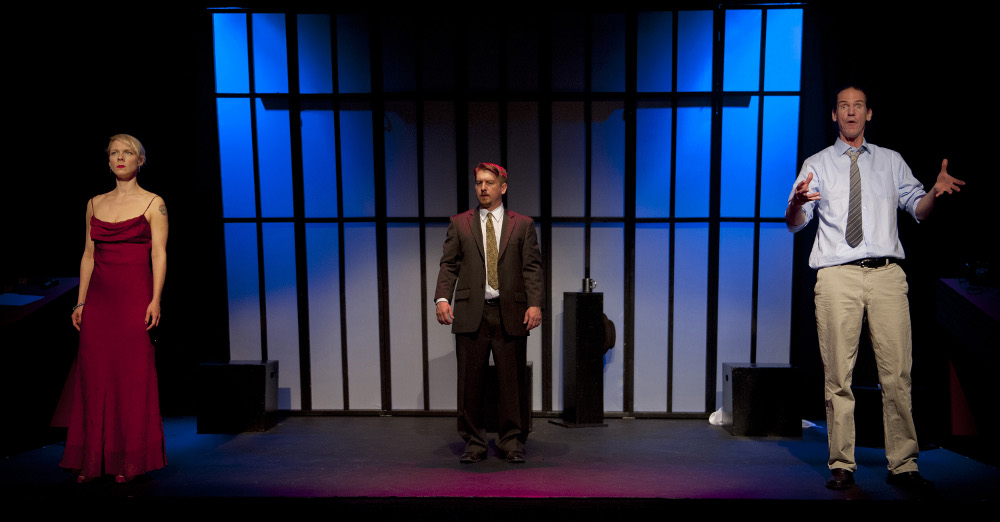 In noir, it’s the clichés that play best: the hardboiled Private Eyes with sharp reflexes and the hardhearted women with secrets to keep. Archetypes, almost, they stand in for something larger than themselves, larger than us, extravagantly idealized Everypersons colored with just enough of the mundane to seem believable, each tawdry crime scene standing in for a twisted version of the American Dream gone horribly awry.

In Dan Harder’s “A Killer Story,” playing at the Berkeley Marsh through May 18, the detective, Rick (Ryan O’Donnell) cuts a familiar figure in a shabby suit, wise-cracking his way through seemingly endless interrogations of his clients, the dame and the duped business partner, both of whom have cause to suspect the other of treachery. Throw in a missing man, a ground-breaking scientific discovery, and an undercurrent of sexual licentiousness, and stir them together with a swizzle stick, and you’ve got yourself a recipe for a martini of “Killer” suspense.

The dame, a ferociously icy Madeline H.D. Brown, and the dupe, a furiously twitchy Robert Parsons, flank O’Donnell from opposite sides of the moodily-lit stage (lighting courtesy of Erich Blazeski). He plays the suspicions of each against the other, waiting for one to break, inadvertently setting them both up for a far greater fall from grace than even he can predict. Harder’s grasp of the tough talk of classic noir juxtaposes nicely with his humorous references to present-day markers such as email and anti-smoking regulations. A bit less successfully rendered are the experimental sections of “zippered” dialogue—overlapping lines of cleverly complementary phrases—which call attention to themselves every time they’re trotted out and do little to propel the momentum of the piece. But there’s a wicked pleasure in a crime story that holds not just human nature but the art of the tale culpable for murder, a juicy twist tastier than any lemon rind.

In the usually hushed galleries of SF MOMA, the stories one typically encounters are of a quieter kind: didactic curator statements of the various artworks on display and biographical information of the artists plus the viewer’s own internal interpretations of what they see. That these interpretations might take fanciful flight into a realm of random association and spontaneous fiction is an undeniable yet under-acknowledged part of the museum experience. It’s this silent side of art appreciation the experimental Storytelling in the Galleries program attempted to give voice to, with some heady results.

Four local solo performers — Victoria Doggett, Sharon Eberhardt, Mia Pashal, and WL Dherin — each wrote and performed a story inspired by a quartet of unique art works. Doggett’s tongue-in-cheek love letter to the untitled, undefended Robert Gober torso crafted from beeswax and human hair was the first story on deck, followed by Eberhardt’s odyssey of an art student enraptured by the muted palette of Philip Guston. Pashal passionately dissected the concept of the artist’s muse while positioned before Jim Dine’s textured canvas of a giant heart bloating around a c-clamp while Dherin narrated a tale as witty and wondrous as the Fred Tomaselli work that inspired it. It wasn’t immediately clear what the effect of these articulated fantasies had on the museum-going public at large, but they certainly added a fascinatingly interactive layer to the typically hands-off gallery experience.