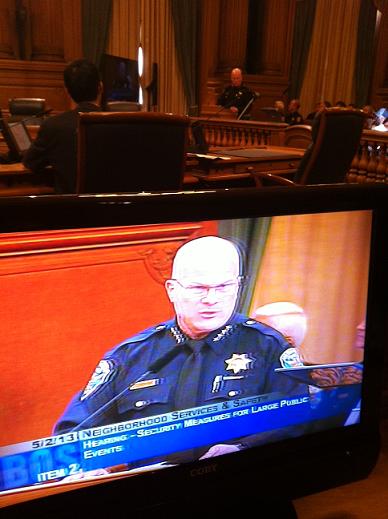 Police video surveillance was in the spotlight during yesterday’s City Hall hearing on security measures at large events, as supervisors voiced a desire to strike the right balance between security and civil liberties. And while they got some reassurance and small signs of restraint from the SFPD, they also learned about secretive new security measures that go beyond what the public was aware of.

San Francisco Police Chief Greg Suhr clarified misleading media reports (a Chronicle story then picked up by Associated Press) that he’s seeking real time video surveillance along Market Street. Right now, Suhr said he just wants an inventory of existing video cameras along Market and downtown that he can request footage from after a crime is committed and that he would make his case to the board if he ever wanted to go beyond that.

“Right now, we only look at footage in retrospect,” Suhr told the Neighborhood Services and Safety Committee hearing, adding that he has no objections to seeking a court warrant to obtain that footage because “we do want it to be admissible.”

Yet Suhr and Deputy Chief James Loftus also revealed that SFPD will be deploying an undisclosed number of temporary real-time video surveillance cameras atop long poles at the Bay to Breakers footrace on May 19, as it did last fall during the World Series and the big parade down Market Street celebrating the Giants victory.

“We always want more video,” Suhr told the Guardian, although he said that he also understands the civil liberties sensitivities of San Franciscans, which is why he isn’t now seeking a permanent increase in SFPD’s real time video surveillance capabilities. “I’m from San Francisco, I get it.”

Other security tools that the SFPD will be employing at Bay to Breakers and other large events are technology that uses video cameras on police cars to capture license plate numbers and run them through a DMV database, what Loftus vaguely described as “specialized resources from surrounding jurisdictions” (watch out for the drones, y’all), and unspecified “FBI assets [that] will be present and assisting in event security.”

When Sup. Eric Mar, who called the hearing, asked about those last two items, Loftus said he wouldn’t discuss them publicly, but “I could talk to you about it offline if you’d like.”

Sup. David Campos said that he doesn’t want San Francisco to be reactionary after incidents like the Boston Marathon bombing and that we should be a model city for balancing security with civil liberties: “I think that’s a very difficult balance to strike, but it anyone can strike that balance, I think San Francisco can.” He also expressed concerns about plans to ban backpacks at Bay to Breakers: “I don’t know if that’s going to address the problem.”

Loftus said the ban only applied to large backpacks (larger than 8.5x11x14 inches) and that runners and spectators will still be allowed to use small backpacks to hold water and changes of clothing. Yet for those concerned about the creeping police state, including several people who spoke during the public comment period, there was little consolation offered in the presentations, and the supervisors said this would be an important ongoing discussion.

“This is a discussion that goes beyond San Francisco,” Campos said. “We as a country need to have this discussion.”