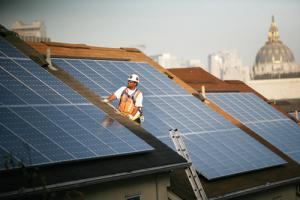 One of the most important stories on the future of the country’s electricity supply has been largely ignored by the major media outlets. My friend Johnny Angel Wendell, who is a talk-show host at KTLK in Los Angeles, passed it on to me, or I might have missed it, too.

Here’s the deal: The research arm of the private utility industry has issued a report saying that solar panels — particularly used in small-scale distributed generation — could soon make the entire industry obsolete.

Just the other day, Duke Energy CEO Jim Rogers said, “If the cost of solar panels keeps coming down, installation costs come down and if they combine solar with battery technology and a power management system, then we have someone just using [the grid] for backup.” What happens if a whole bunch of customers start generating their own power and using the grid merely as backup? The EEI report warns of “irreparable damages to revenues and growth prospects” of utilities.

This is precisely why we will never get to a more renewable future if the power supply and grid remains in the hands of private utilities. They don’t want distributed solar, which is the most effective and efficient way for households to get renewable power — because if the percentage of households and businesses with solar panels on the roof rises as much as it’s expected to in the next decade, the utilities will see huge revenue and profit declines.

To make it more interesting, the report suggests that the customers who DON’T have solar are going to see huge rate hikes, as much as 20 percent or more. Which raises an important question: CleanPowerSF may be more expensive than PG&E when it starts up this fall — but it won’t be more expensive for long. As the city builds out its own renewable infrastructure, and does more demand-management (which private utilities also hate), the price of public power will come down — and the price of private power will rise. A lot.

The city doesn’t have to please shareholders or the stock market — which is why public-power agencies around the country are doing a lot better at promoting renewables. In the end, if CleanPowerSF drives the city to a sustainable future where there’s little need for a major central operator, so much the better.

That, again, is why PG&E is fighting CleanPowerSF and will continue to try to undermine it. And why PG&E will promise to sell more “green energy” to customers. And why all of this is just part of the attempt of a dinosaur company to stay alive when it’s becoming increasingly clear — even to the utilities themselves — that the role of a giant private regulated monopoly electricity supplier is coming to an end:

If nothing is done to check these trends, the U.S. electric utility as we know it could be utterly upended. The report compares utilities’ possible future to the experience of the airlines during deregulation or to the big monopoly phone companies when faced with upstart cellular technologies. In case the point wasn’t made, the report also analogizes utilities to the U.S. Postal Service, Kodak, and RIM, the maker of Blackberry devices. These are not meant to be flattering comparisons. Remember, too, that these utilities are not Google or Facebook. They are not accustomed to a state of constant market turmoil and reinvention. This is a venerable old boys network, working very comfortably within a business model that has been around, virtually unchanged, for a century. A friggin’ century, more or less without innovation, and now they’re supposed to scramble and be all hip and new-age? Unlikely.