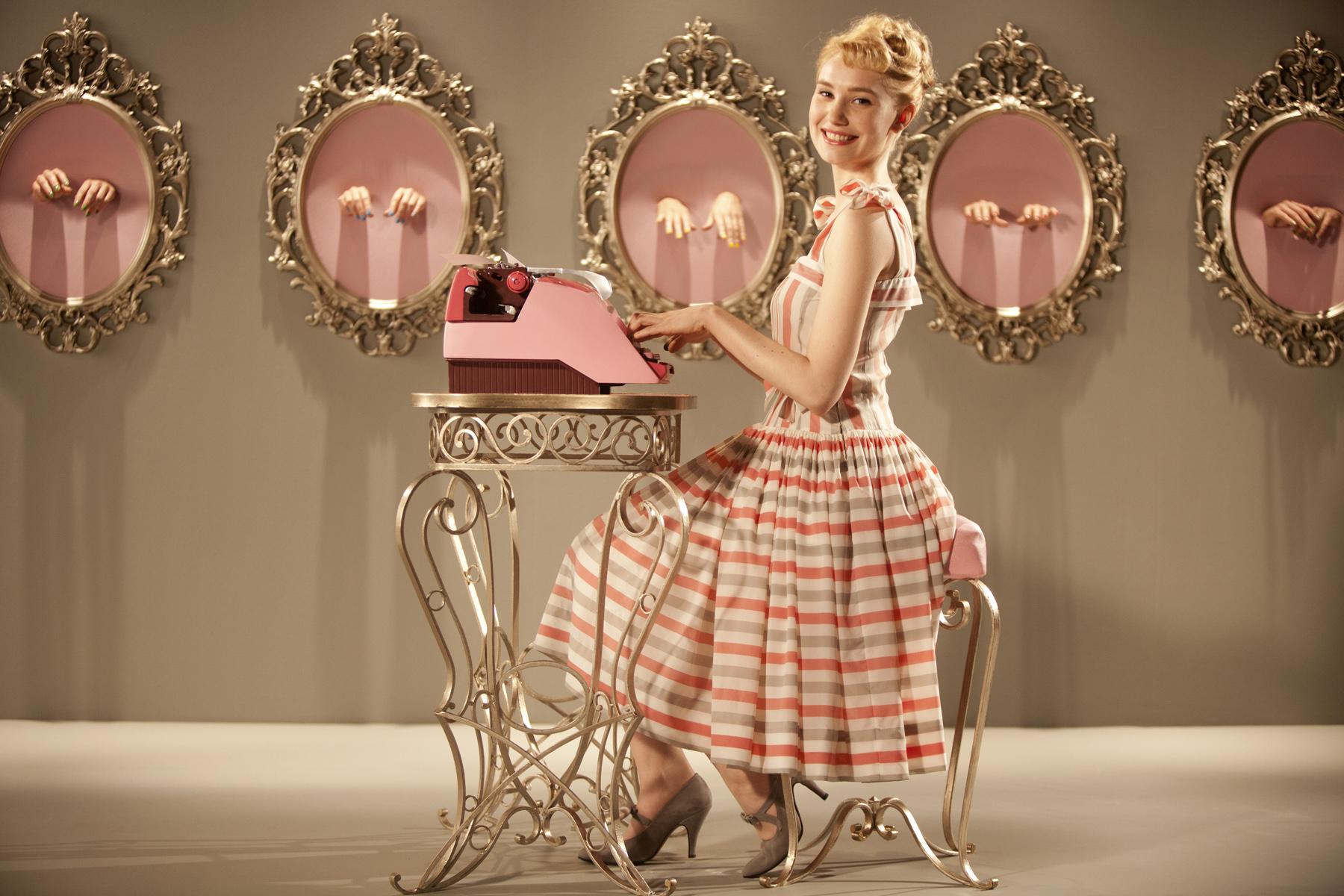 At the outset of Friday evening’s SFIFF screening of the ’50s-set French film Populaire, director Régis Roinsard offered two hints as to what lay ahead — noting that his SF sightseeing agenda had included a visit to Jimmy Stewart’s Lombard Street Vertigo residence, and encouraging the audience to stick around for a Q&A sampling of his Borat-level English proficiency. As it turned out, Roinsard handled the post-screening questions with slightly awkward but un-Borat-like charm (and occasional interpreter assistance). And the film itself — while featuring a man gripped by a daffy obsession involving a beautiful blond, who, come to think of it, is often seen sporting an updo — has a considerably lighter mood than the Hitchcock thriller, finding its tense plot turns and clacking rhythms within the fast-paced world of competitive typing.

Yes, typing, and perhaps if it weren’t the ’50s, this would be the fluorescent-lit story of a soul-sucking data entry job and the office drone who supplements it with a moonlighting gig. But it is the ’50s, a cheery, upbeat, non–Far from Heaven version, and Populaire invests with a shiny glamour the transformation of small-town girl Rose Pamphyle (Déborah François) from an incompetent but feisty secretary with mad hunting-and-pecking skills into a celebrated and adored speed-typing champion. The daffy obsessed guy is her boss, Louis Échard (Romain Duris), a handsome young insurance salesman who bullies her, but very charmingly, into competing against a vast secretarial pool in a series of hectic, nail-biting tourneys, which treat typing as a sporting event for perhaps the first time in cinematic history. (See also: scenes of Rose cranking up her physical endurance with daily jogs and cross-training at the piano.)

The glamour slips a touch when Populaire (Roinsard said he took the title from the Nada Surf song “Popular”; the word also translates as “working-class”) starts to delve into psychological motivations to rationalize some of Louis’s more caddish maneuvers. But meanwhile, back in the arena, bets are made, words-per-minute stats are quoted by screaming, tearful fans in the bleachers, hearts are won and bruised, a jazz band performs that classic tune “Les Secrétaires Cha Cha Cha,” and we find ourselves rooting passionately for Rose to best the reigning champ’s 312(!)-wpm record.

Fast-forwarding a few days and a couple decades, Olivier Assayas’s Something in the Air, which screened Monday night and opens theatrically May 17, depicts a France far removed from the modern-fairy-tale setting of Populaire. Set a few years after the strikes and street battles of May ’68 (the film’s original title is Après Mai, or “After May”), Something centers on a group of radical teenagers in the Paris suburbs grappling with riot police and questions of what use to make of themselves in the world. Only loosely plotted, the film is more a series of vignettes, tracking the restless progress of Gilles (Clément Métayer) and a handful of his cohorts through school’s end, their flight to an Italian squat for the summer after a political action at home turns violent, and the dispersal of the group to various world-map points.

School seems to be mainly a place to sell movement newspapers to other students, or to wheat-paste and graffiti-bomb the walls at night. Conversations revolve around political sectarianism and the pitfalls of bourgeois documentary-filmmaking impulses. And position speeches on revolutionary tactics and relationships alike are delivered with a flat dogmatism (Gilles’s friend Alain makes it through the entire two-hour film without cracking a smile) as the characters attempt to sort out their allegiances to political revolt, art making, and romantic entanglement.

While the youth of Assayas’s film seem to view their lives and actions against a vast panorama of political and social import, the heroine of Justine Malle’s Youth keeps her gaze trained on a smaller circle encompassing academic ambition, romantic and sexual exploration, and family, though the order of precedence shifts several times over the course of this small, somewhat slight coming-of-age film. Malle is the daughter of celebrated French director Louis Malle, who passed away in 1995, and Youth is a semi-autobiographical examination of a 20-year-old girl’s experience of losing her father amid a period of personal upheaval.

Juliette (Esther Garrel, daughter of director Philippe and sister of actor Louis) is in the midst of studying for entrance exams and falling in love (she believes) for the fourth time when she learns that her father has been diagnosed with a fatal and quickly moving virus. Unable or unwilling to fully register this terrible new reality, she spends little time with him at the country house where he lives with his third wife and their daughter, choosing to stay in Paris cramming for her exams and pursuing a lengthier sexual résumé.

This is some dark material to mold into story form, and in certain ways it feels as if Malle had trouble looking at it as she worked with script cowriter Cécile Vargaftig. It’s hard to know how much overlap exists between the events Malle experienced nearly 20 years ago and those Juliette goes through on-screen, but the film has the feel of a tight fit, with little room leftover to step back and gain perspective.

SFIFF continues through May 9.