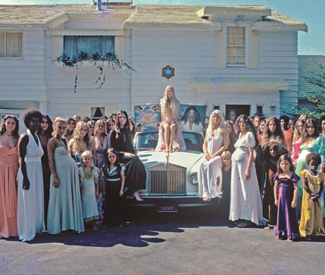 As the home movies that comprise Maria Demopoulos and Jodi Wille’s documentary, The Source Family, suggest, there were golden moments aplenty, even as the mainstream began to view the group with suspicion (and an aging Father Yod’s decision to take multiple wives confused some members — particularly the woman he was already legally married to). Tapping into the group’s extensive film and music archives, as well as interviews with surviving members, The Source Family (opening here with a big gala Thu/2 and running through May 9 at the Roxie) offers a captivating look at what had to be the most earnest (and most photogenic) cult of the 1970s. I spoke with Demopoulos and Wille to learn more.

San Francisco Bay Guardian When did you first hear about the Source Family, and how did you hook up with “Family historian” Isis Aquarian?

Jodi Wille In 1999, a friend showed me a CD box set with all nine of the original Family records. I’d been obsessed with cults, communes, and radical groups from the 1960s and ’70s for 20 years — but I’d never heard of the Source Family. I was shocked that this existed, and that they had this kind of musical output. Also, there were pictures of them looking very beautiful and stylish. But I went online and there was nothing there [about them].

One day, my then-husband, [Feral House publisher] Adam Parfrey, came home with a DVD he’d found at Amoeba Records: a very limited-release student film on the Source Family. We watched it, and I was struck by how thoughtful and charming the Family members were in the interviews.

I went online again, and this time there was a website. I’m a book publisher, too — I put out books on counterculture, sustainability, and things like that [on Process Media and Dilettante Press] — so I emailed, asking if they’d ever considered doing a book. Isis Aquarian wrote back and said [she and her Source Family brother Electricity] had been working on a book for seven years. So I started going through her massive archives with her; we worked to expand the book, which had been written for Family members, for the public. As we were doing that, we were filming interviews with other Family members. When Isis let me know about the film component to her archive, I realized that this was an extraordinary story that had all of the elements we would need for a great documentary.

At that point, I brought in Maria, a close friend of mine who had become a very talented commercial director. Before the book, [The Source: The Untold Story of Father Yod, Ya Ho Wa 13, and The Source Family], people were really private about their experiences, and I think some of them were uncomfortable about going public. But the book was received positively; it told the story from the believers’ point of view and I think that helped develop their trust. So we were very lucky to get incredible access.

SFBG You were friends with Isis, who’s credited as an associate producer, by the time you started working on the film — yet it offers a balanced portrait. How did you stay objective?

JW Isis has done an enormous amount of work helping us in many ways, but she was not involved creatively. That was really important to us, to have that freedom, and she agreed to that. But I became close to some Family members, so I think bringing Maria in was really essential to help with the balance.

Maria Demopoulos I think, objectivity aside, we just focused on letting the Family members speak for themselves, and trying to go for as much authenticity as possible, hearing all perspectives. We worked hard to represent as many Family members as possible and really tell the story from an insider’s point of view.

JW We tried to reflect the overall feelings that we were getting from Family members, because everyone had completely different experiences within the Family, and everybody had strong opinions about it.

And it’s not really about being objective — no filmmaker or documentary is ever truly objective. It’s just about being open and letting people come to their own conclusions.

MD It was extremely difficult, but honestly, we hit the jackpot. It was just like an incredible gift and honor to go through the archive. We had a three-and-a-half-hour cut, and we just kept whittling it down. Often times, we just had to stay focused; even if we had some fantastic footage, if it didn’t absolutely serve the story, we had to pull it out. It was difficult, but that’s actually a great problem to have.

JW And I’d like to give credit to Isis Aquarian for preserving that archive. There were hundreds or maybe thousands of groups like this that existed. But most of them didn’t document themselves, or if they did, they didn’t hold on to the artifacts or preserve the documents. She’s a true documentarian, even now.

SFBG Did you encounter any resistance from former members, or anyone who thought the documentary shouldn’t be made?

MD From the Family members’ perspective, no. They were extremely cooperative. [On the other hand,] since the Source Family existed in Hollywood, they had many connection to celebrities. We approached a lot of celebrities who were around at that time, and we had a tough time getting access to them.

JW The Source Family members all knew about the book, and they knew that people in their 20s and 30s had become fans of the Family. So I think that made them a lot more open to talking to us. But as far as people like Warren Beatty and Donald Sutherland, who were actually friends with Father Yod, I don’t think they were aware of that phenomenon. They were still thinking about how the Source Family was perceived with a lot of controversy back in the ’70s. I think it’s possible that those people, besides being really busy, weren’t quite sure what we were doing with the material, or if they wanted to associate themselves with it.

SFBG Also, now that decades have passed, when people hear “Southern California cult” and “the Family,” they automatically think “Manson.”

JW For me, that was an important inspiration to make this film. Again, when you speak with the participants, or even with scholars, you find it’s a very different story. We have such a primitive understanding of what these radical, social, and spiritual experiments were really doing back in the 1960s and ’70s, and the kinds of effects that they were having on the participants’ lives.

Maria and I interviewed about 40 of them just for The Source Family, and I’ve gotten to know members of other groups over the years. I find that these groups, more often than not, were very important cultural incubators. A lot of progressive ideas came from them, including the slow food movement, the mind-body-spirit movement, the natural birthing movement. A lot of tech-industry people came from these experiments — San Francisco was a hotbed for them. And many of them were harmless. They didn’t create any major havoc. They were high-risk experiments, of course, but a lot of what people took away was deep and transformative.

SFBG Music plays a huge part in the film, and again, you had a lot of material to choose from. How did you decide which songs to match with the footage?

JW I knew the music really well, and then our editor, Jennifer Harrington, did an incredible job working with the music, and Maria pitched in, too. We did it by knowing the music and thinking about the mood, and just playing with stuff to see what fit.

MD We often chose songs that actually lyrically fit with what was happening in that particular scene. The music was incredibly well-suited to what was happening, because they’re basically singing their own story.

SFBG I missed The Source Family when it played the San Francisco International Film Festival last year, but I heard the Q&A got pretty colorful. How have screenings been going overall?

MD Response has been great. We’ve been selling out shows, and the Q&As have been very lively. A lot of people who participated in social experiments or lived in communes have been coming to the Q&As, but we’ve been getting a lot of younger kids as well. It’s been intergenerational.

JW That was the fun part in San Francisco, because there were two or three people in the audience who were in different communities who spoke up during the Q&A, and it became this really interesting group therapy session. And it’s not about us saying, “Oh, it was this way.” It’s us opening up new ideas so people can have new discussions about what was really going on back then.

SFBG What’s the opening event going to be like?

JW For the various premieres, we have Source Family members showing up to do Q&As in eight cities. We’ve got three in San Francisco: Isis, Electricity, and Galaxy — who was the fashion designer in the family. Also at the Roxie, we’re going to have food made from original Source Family recipes.

We’ll also have tribute bands in six cities. In San Francisco, after the screening, the Source Family tribute band is going to be playing at the Chapel [at 777 Valencia] — they’re called the Penetration Blues Band, with Michael Beach from Electric Jellyfish and Colossal Yes, Noel von Harmonson from Comets On Fire and Sic Alps, [and others]. It’s going to be a really fun night! *