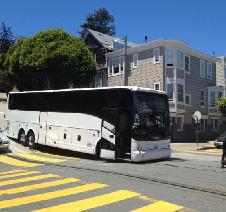 I’ve been waiting for the Chron’s culture columnist Caille Millner to finally write about something interesting, and I got it April 27 when she stumbled onto the Google Buses. Or rather, the problem with the Google buses.

Thanks to the Chron’s silly paywall, you can’t read her column online, and since hardly anyone in San Franciso buys the Chronicle anymore, Millner’s story won’t get the attention it should. So allow me to repeat some of it here:

It was close to 9 p.m., and I was waiting at a bus stop on an island in the middle of Market Street. Next to me stood a tired-looking middle-aged woman who had clearly just left work. While we waited, up cruised the big white pod. It paused right in front of us. The door at the front slid open to discharge a few Googlers, and the luggage door on the lower right side of the bus also slid open to allow them access to their belongings.

One gentleman bounced down the bus steps and pushed his way in front of us to get his bicycle from beneath the bus. As he hurled it out onto the bus island, it hit the woman standing next to me. She glanced at me, mute and horrified, and in that moment I sensed that she didn’t feel able to confront him. So I did.

“Excuse you,” I said loudly.

>No response. He was busy fumbling with his messenger bag

He glanced up in no particular direction, as though suddenly troubled by the buzz of an insect. Circling his head around, he finally noticed where he was – the bus stop, the night, the fact that there were other people around him.

“Sorry?” he asked the air, in a tone of confusion. Then he climbed on his bicycle and pedaled away. He never looked at the woman he had hit.

There’s a sense of entitlement about the rich, and the young rich are often the worst. And that’s one reason why the logic of the Google bus — it’s better to have a single luxury vehicle haul all those people to work than have them all drive cars — doesn’t register with a lot of us. They’re too good for Caltrain. They’re too good for Muni. And they’re too damn good to bother to notice that they’ve hit an old lady.