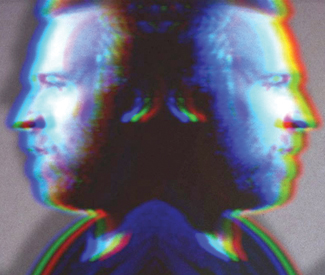 Bands have hierarchies. James Murphy was essentially LCD Soundsystem, Alexis Taylor and Joe Goddard are Hot Chip. If anyone knows this, it’s Al Doyle; the multi-instrumentalist was the guitarist for LCD before it disbanded in 2011, and continues to be a crucial member in Hot Chip.

“Joe and Alexis are a songwriting duo that works extraordinarily well, and no one else has written a song that Hot Chip has played,” Doyle said over the phone, on a bus somewhere en route to Palm Springs, getting ready for the first week of Coachella, where the UK group was slotted to play. Other members Felix Martin and Owen Clarke have made musical contributions along with him, but never whole songs. “Recently, we’ve been collaborating a little more closely, and it might get to the stage where Alexis and Joe feel that they can do a song that I’ve started or Felix has started, but that hasn’t happened so far.”

This probably says less about controlling or opposing personalities, as it does the overabundance of ideas currently in Hot Chip. Goddard released a joyously cuddly dance album with Raf Daddy as the 2 Bears, Taylor is collaborating with German producer Justus Köhnhke as Fainting By Numbers, and Doyle has his own distinct musical outlet in New Build, a project with Martin. “We were working on a few tracks at the same time the LCD thing was going on. The roots were me and Felix, but working in the studio with our engineer Tom Hopkins just seemed to make sense as he got more involved with the project, so it became the three of us.”

New Build’s first album, Yesterday Was Lived and Lost, pulls back from the densely layered production of Hot Chip’s recent albums, for a slightly rawer garage sound that’s more characteristic of Doyle’s LCD background. But much of the somber and tender emotion that typifies Hot Chip is still there. On “Finding Reasons” Doyle morosely recalls Peter Gabriel over a mechanical drum beat, with recurring apocalyptic apprehension. (“And the news is coming in / Of another city’s sad demise.”)

“I was feeling a lot of apathy around at the time I was writing those lyrics,” Doyle said. “Syria was on my mind around that time, and even now there’s a weariness with that kind of information coming through.”

At times, Doyle feels a need to be purposefully obscure as the principal songwriter in New Build. “I probably write a little bit more obliquely, than some of the Hot Chip songs, which are quite intensely personal to Joe and Alexis. When I feel myself getting too personal there’s a sense of paralysis. I can’t really sort of work like that, and often write a couple of steps removed from the original feeling.”

Occasionally things are playful, silly even. Take “The Third One.” Built around a “bleepy” piece by producer Hopkins, it’s got a bouncy rhythm, and some pointedly Prince-like guitar work by Doyle, as the lyrics get into the logic of fighting Nintendo bosses, who as everyone know always come in threes. “I still enjoy videos games,” Doyle said, “It’s something me and Felix do and try not to talk about it too much.”

Still, Doyle is showing through. He describes “Medication” as a curveball, a “straight-up attempt to write as pop-y song as you kind of could.” Over a funky bassline and buoyant beat, the sardonic lyrics recommend simple, chemical solutions to your problems, coming off like a pharmaceutical jingle written by Aldous Huxley. “Retrospectively having looked at that song, there’s a lot of mental illness in my family and it’s something that I tend to find myself thinking about now and again.”

New Build is using gaps in Hot Chip’s schedule (and the relative proximity of its equipment) to stage a West Coast tour. Following the expansive models Doyle is used to, the three members will increase to seven on the road. More expensive, as well, it might mean barely breaking even or going broke, but Doyle prefers the spectacle. “Lots of new bands, you like the music on the record, but then go see them play live and it’s a couple of guys with electronics, maybe one of them is playing guitars but doesn’t really need to, or playing a bit of completely extraneous percussion. I didn’t want it to feel like a tacked on thing, I wanted to feel like an experience.”

“We’re very lucky to find some amazing musicians. Ben Ubly plays bass guitar, and he is childhood friends with Tom, who was like ‘this guy can really play.” And we were like ‘Well, how good could he really be?’ But then he turns out to the one of the best musicians we’ve ever played with. Never been in any bands, literally just a bedroom player. Just stepped up and seems like he’s built for it.”

With New Build, Doyle has also stepped up and into the front. We’ll see how well he’s built, having spent over a decade in two international touring bands, and likely picking up a thing or two from Taylor, Goddard, and Murphy. “James was just able to really relax an audience and make them feel appreciated that’s just something he has as a person. I’d obviously love to try and emulate that sort of presence. I’m still learning how to do that a little bit.”