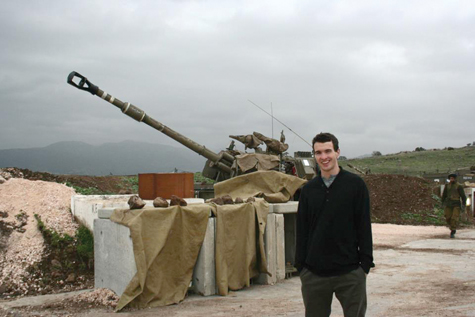 Late Tuesday night, UC Berkeley Student President Connor Landgraf decided not to a veto SB 160, which called on the university to divest from companies that profit from the Israeli occupation of the West Bank. The bill labels the university “a complicit third party in illegal occupation and ensuing human rights abuses” by Israel.

Before announcing his decision, Landgraf acknowledged to the Guardian that he had promised divestment proponents during his campaign that he would not exercise his veto. But following the close 11-9 vote last Thursday, Landgraf came under intense pressure from both pro- and anti-divestment groups and he waited until just before the deadline for a veto to announce his decision.

Although the UC Berkeley Student Senate has no control the university’s budget, the divestment bill drew national attention. Palestinian solidarity activists called upon Landgraf to allow the bill to stand, while the Jewish Community Relations Council (JCRC) and the Israel Action Network launched campaigns to pressure Landgraf into vetoing the measure.

Although Landgraf stopped short of issuing a veto, he did release a statement distancing himself from the bill.“I firmly reject its one-sided narrative, and the bill’s complete and utter failure to create any constructive discussion or dialogue on a complex and multifaceted issue,” Landgraf wrote.

Following Landgraf’s announcement, SB 160 author Senator George Kadifa praised Landgraf’s decision to refrain from a veto. “The 60 communities that supported divestment are grateful for President Landgraf’s courage in agreeing not to veto,” Kadifa told the Guardian.

Ultimately, the divestment bill is unlikely to alter the UC’s investment portfolio. Before Landgraf announced his decision, UC Chancellor Robert Birgeneau voiced his opposition to SB 160, promising the bill would have no effect of the UC’s investment decisions.

But the success of encouraging divestment at Berkeley may inspire other UC campuses to follow suit. On Tuesday, students at UC Davis launched a campaign calling on their own student government to consider divestment from many of the same companies included in Berkeley’s SB 160.