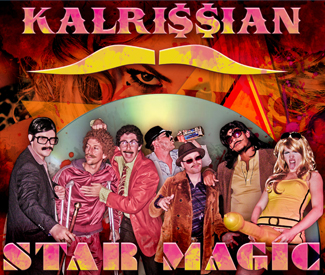 SUPER EGO It’s been four years since slapstick-nasty, genitally overeager, hilarious/uncomfortable drunk-uncle Bay rap supergroup Kalri$$ian (www.kalrissianbaby.com) lubed the underground’s earhole with its Tales from the Velvet Pocket album. Watch your fuzzy purse, Alternative Universe Beyonce, because the beastly boys (and girl) — MCs Tyrone Shoelaces, Smooth Rick Chosen, Chachi Harlem, and Felix Livinglow, “Scheisty Manager/Ponzi Prince” Bernie Goldstein, producer and person of interest Keylo Venezuela, and sex kitten choreographer Kitty Lamore — are back up from the gutter on a cloud of neon nose candy. New joint Star Magic drops this week, with an uncensored reunion show Sat/27 at Supperclub. As always, the beats are primo and the lyrics, well, let’s just say they’ve significantly expanded the possibilities of what can be done with a cold bottle of Colt 45 and a couple crazy straws. Let’s let them talk dirty.

SFBG Where in hell have you been?

Felix Livinglow I got sent down for a two stretch, for petty theft, petty larceny, and impersonating Tom Petty. While in prison I discovered religion then promptly lost it again, so I started a prison radio show, powered by a potato and using my toilet bowl as a transmitter. I figured if you can transmit diseases via toilet bowl, then why not a radio broadcast?

Smooth Rick Chosen I actually had a camera smuggled in and hooked up to Felix’s toilet bowl for one fate-filled day. I caught what Felix was cookin’ up and literally saw what came out of his guests. I saw new and expansive universes formed in mere seconds, and was inspired to steal Chachi’s motorcycle and drive naked to Cambodia. It was there where Perseus (Rick’s penis) and I trained black-jawed cobras for the jungle circus of Gwao Nham Fokkk. I became a legend and emerged from the sacred mist one week ago. I need a shower badly.

Chachi Harlem With my bike gone, I began walking barefoot across the tundras of time. Vietnam, Thailand, Laos, Fresno. I’ve been coaching and teaching “abroad” many of my top quality happy ending techniques. Three of them have been outlawed in the Gwang Jhao Province for inciting “Jumanji Balls,” a rare and beautiful virus I created in a mushroom dream. You would have never thought how tough this job is but, I’ve taken a noble position in my life.

Bernie “The Touch” Goldstein With political spending heating up in America thanks to the SuperPAC, Tyrone and myself saw a golden opportunity to quench an unfilled niche in the musical landscape… the political rally backup band. We formed “Funk Shrugged,” a pro-capitalist funk band, and then really exploded with our libertarian acid rock album Married to Jesus. Big money, lemme tell yuh! Tyrone and I are currently working on a rap album with evangelist Joel Osteen. Stadium status, baby.

Kitty Lamore With the band in chaos and the drugs running out I turned to a tantric cult to get my fix of good vibes. They kicked me out once they found the amyl nitrates I had stashed to really peak my experience. Luckily, the week before I was spotted by a Broadway talent scout while doing sun salutations and he asked me to star in Yoga, the Musical which included my solo debut of “Downward Facing Dog” (a heart wrenching tale with plenty of spirit fingers).

Keylo Venezuela I take a spirit quest to the magic mountains of Peru. This is how the star dream is born and where the power of legend is arrived from.

Smooth Rick Chosen I would relate listening to this album as exactly like the feeling of injecting a four gram LSD-laced speedball into your member, and then having said member pulled through a guided tour of Paisley Park by Prince himself, as he rides atop a golden chariot fueled by volcanic bass and angel dreams. Take off your pants and press play.

Chachi Harlem This new album is like a women’s inguinal ligament. You know those abdominal creases from the belly button to the yaya? Through this album, KALRI$$IAN will caress, lick, and suck that area ’til your jeans cream through.

Felix Livinglow It kinda has the rush of coke, with the staying power of one of my ecstasy erections and will make you bob your head like an Essex chick.

Bernie “The Touch” Goldstein This album is like the thrill of a short sale mixed with the euphoric release of an Invisible Hand reach-around.

Keylo Venezuela I need take many soul smokes and spirit spores to make capture the Star Magic. These song visions take truth to this and it is able to be imagined when people learn these journeys. With Velvet Pocket we seeked to take minds and be open in a smaller way, with Star Magic we make minds go expand to outer space with inner touch and feel.