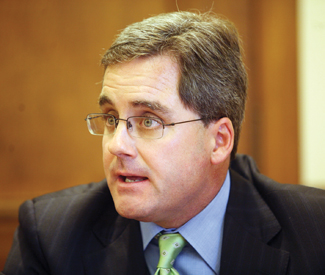 San Francisco restaurants that have been cheating their customers and employees — charging diners for city-required healthcare coverage that they aren’t fully providing to workers — will finally be exposed in the coming weeks, with some notable names in foodie circles among the likely culprits.

City Attorney Dennis Herrera is working on settlements with dozens of restaurants that responded to his investigation and partial amnesty offer, which had an April 10 deadline. His effort augments the complaint-driven enforcement actions by the city’s Office of Labor Standards Enforcement, which has collected millions of dollars for thousands of employees of negligent local businesses in recent years.

At issue is the Healthcare Security Ordinance, the landmark 2008 law authored by then-Sup. Tom Ammiano that requires San Francisco businesses to provide a minimal level of healthcare benefits to their workers. Businesses are also required to report spending and surcharge figures to the OLSE annually, with the next report due April 30.

Herrera used that list to ask more than 70 businesses to show they are in compliance with the law or reach discounted settlements now to avoid punitive fines or criminal charges later, and Herrera told us he received 60 responses and had his inquiry snubbed by fewer than a dozen.

“It’s too early to talk about how large a recovery we’ll be getting for workers, but I’m pleased with the response rate,” Herrera told us. He refused to estimate how many of the respondents were found to be in violation, but in an April 11 message to reporters covering the issue, his spokesperson Matt Dorsey wrote, “Based on our investigation so far, we anticipate that the majority of these establishments will be required to pay money to compensate their workers.”

WHAT THE FIGURES SHOW

The Guardian contacted many of the restaurants that topped the OLSE list. Some wouldn’t respond, some said they’ve changed their policies since the controversy erupted, and some wouldn’t talk until after a settlement is announced — including the Mina Group. That seems to indicate they’re about to pay for past violations.

Nicole Kraft, who handles public relations for the Mina Group, responded to Guardian inquires by writing, “I wanted to let you know that Mina Group will soon be releasing a joint statement with the City Attorney’s office, which should answer many of your questions. We’ll be sure to send it your way ASAP.” [UPDATE 4/29: Mina Group settled its case for $83,617.]

Sources in the City Attorney’s Office say settlements with as many as 10 restaurants that admit clear violations of the HCSO could be announced in the next week or two, while another 10 or so have provided data showing they are not in violation. The rest are more complicated and could take weeks or months of investigations, which are being led by Deputy City Attorney Sarah Eisenberg.

“There are going to be some that are given a clean bill of health,” Herrera told us. Herrera also told us that his investigation is just getting started and that it will look at businesses that haven’t made required annual reports to the OLSE. “When we get to a place where we’re announcing settlements, we’ll have more to say,” he said when asked for details and dimensions of his investigation.

GGRA Executive Director Rob Black has maintained that the OLSE figures don’t accurately reflect whether businesses are in compliance because the reporting requirements are confusing. GGRA held a compliance workshop on April 17, and Black told us about 40 restaurateurs attended.

“It was very informative and we got really good feedback from the restaurants,” Black told us. “We had people saying, ‘knowing what I know now, we should redo my 2011 form because I did it wrong.”

Black was initially critical of Herrera’s focus on the restaurant industry, but told us last week, “He made a commitment that the process would be efficient and fair, and he’s lived up to that so far….I still believe that the majority [of violators] didn’t have a mal-intent…Many people on the list that was reported have done nothing wrong.”

Cheesecake Factory — which was seventh on last year’s OLSE list, allegedly taking in $159,242 more in surcharges than it spent on employee health care — insists that it is in compliance and expects the City Attorney’s Office to confirm that.

“We believe the City Attorney’s initial review was erroneous,” Richard J. Frings, the company’s vice president of compensation and benefits, told us. “We are in full compliance with HCSO. Our healthcare costs in San Francisco have far exceeded the surcharge that we have collected. Once the City Attorney’s office has an opportunity to review our filings, we believe this matter will be closed without any further action.” He refused to provide figures to support the assertions.

Most of the restaurants that have been accused of stiffing employees use health savings accounts, which health officials say is a far worse option than private health insurance or the city’s Healthy San Francisco plan, which was created in conjunction with HCSO. Federal law bars cities from prescribing how health benefits are delivered.

San Francisco’s restaurant industry has always been hostile to the HCSO’s employer mandate, with the Golden Gate Restaurant Association unsuccessfully challenging the law all the way to the US Supreme Court. Controversy then erupted in 2011 with revelations (first in the Wall Street Journal, followed up by local media outlets) that some of the city’s most high-profile restaurants were shirking their responsibilities even as they charged diners 3 percent to 5 percent surcharges, sometimes essentially pocketing that money at the end of each year.

That verges on consumer fraud, but District Attorney George Gascon has refused to investigate, telling the Guardian and other papers that he was deferring to the OLSE and the City Attorney’s Office.

In 2011, a progressive-led majority on the Board of Supervisors passed legislation authored by Sup. David Campos to require that businesses keep the money they are required to spend on employee healthcare — which is currently $2.33 per employee-hour for large companies or $1.55 per employee-hours for businesses with less than 100 employees — for employees to use as needed.

But under aggressive lobbying by the GGRA and San Francisco Chamber of Commerce — which asserted the right of business owners to raid these funds, calling the set-aside a multi-million-dollar annual loss to the local economy — Mayor Ed Lee vetoed the measure. He later signed watered-down legislation requiring the money be set aside for two years, setting standards for letting employees know how to access the funds, and explicitly calling for all customer surcharges to remain in escrow accounts.

The OLSE, which also monitors compliance with the city’s paid sick leave and minimum wage laws, can only investigate businesses when an employee files a complaint. But then complaints trigger investigations that cover all of a given business’s employees, who are often compensated for past violations. To file a complaint, just write hcso@sfgov.org or call (415) 554-7892.

OLSE figures show the agency has investigated more than 100 complaints since 2008, resulting in $8.1 million in health care benefits provided to more than 6,400 employees and $244,000 in penalties paid to the city. Herrera’s office also reached a $320,000 settlement with the owners of Patxi’s Chicago Pizza in January, just before announcing his broader investigation.

“The vast majority of San Francisco employers have complied with their obligation to make health care expenditures pursuant to the HCSO,” OLSE Manager Donna Levitt told the Guardian. “With respect to the minority of businesses who fail to meet their obligations, the OLSE works tirelessly to ensure that workers receive the benefits to which they are entitled and that all businesses compete on a level playing field.”

Among the restaurants near the top of the OLSE list that did not respond to the Guardian inquires are Squat & Gobble, Wayfare Tavern, and Trinity Building Services.

“We are actually in complete compliance,” Larry Bouchard, manager of One Market restaurant, told us, explaining its inclusion on the OLSE list by saying, “It’s my understanding that we reported the wrong information.” He said the restaurant uses health savings accounts, but that they are widely used by employees, who get their expenditures repaid within three weeks.

Scott Carr, general manager of Boulevard — who sources say was one of the first restaurants to use the healthcare surcharges on customer bills, and whose parent company, Reroute LLC, was fifth on the OLSE list, underspending by $169,777 — told us the figures didn’t fully reflect the company’s spending on employee health care.

He wouldn’t say whether the company will be settling with Herrera for any past violations, but he did say that the restaurants decided to abandon health savings accounts in favor of health insurance policies for employees starting on Jan. 1. As he told us, “We feel we’ve made a positive step.”