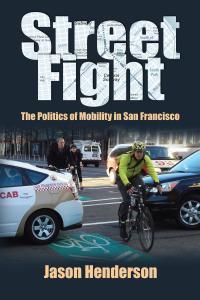 Ideology plays a bigger role in shaping San Francisco than most people realize, as we’ve discussed in this space before. Nowhere is that more true than in the politics of land use and transportation, as my friend Jason Henderson, a San Francisco State University geography professor, discusses in his insightful new book, Street Fight: The Politics of Mobility in San Francisco.

He’ll be discussing his work this Friday, April 19, from 7-9pm during a book launch party hosted by Green Arcade Bookstore across the street at the upstairs loft space of McRoskey Mattress, 1687 Market. Or if you miss that but want to join the discussion, you can catch Henderson’s forum on May 15 at SFSU or what will surely be other local events on this pivotal topic.

Henderson chronicles the seminal events in San Francisco’s history with “automobility” and related transportation issues, from the freeway revolts of the late ’50s through 2000 to today’s continuing political struggles over parking, bicycles, livability, gentrification, and the form, function, and financing of Muni.

Yet the lens that Henderson brings to understanding all of these issues and struggles is ideology, which he breaks down into three major categories: progressive, neoliberal, and conservative. Whether we realize it or not, we can all be fairly easily placed in one of those three categories when it comes to how we think about automobility, or the primacy of cars in modern life.

“A progressive framework conceptualizes mobility as a systemic problem that requires deep social commitment and responsibility. How we get there matters. It posits that there can be too much mobility, as exemplified by high levels of [Vehicle Miles Traveled] in the United States, and that excessive mobility results in both environmental degradation and major social inequality at a local, state, and global scale. The main problem, obviously, is that automobility is part of a wider, systemic moral and social problem of over-consumption and disproportionate materialism,” Henderson writes, sounding themes that I echoed in this week’s cover story.

On the other end of the ideological spectrum are those with conservative views on mobility, who see driving as a basic right, which is the dominant mindset on the west side of supposedly liberal San Francisco. “Unlike progressives, conservatives do not think about responsibility as relating to broader systems such as the economic structure of society. Instead, they think in terms of direct causation and of each individual being responsible for the consequences of his or her actions. For example, poverty is a result of individual shortcomings caused by personal and moral characteristics, not of structural themes like socioeconomic forces beyond an individual’s control. Getting to work on time and providing one’s daily needs are not collective concerns but the responsibility of the individual,” he writes.

Of course, these conservatives still rely on government to build and maintain their transportation infrastructure, which they believe should be centered around cars. “Government should guarantee and accommodate automobility, not seek to discourage it or make it more expensive. Government-sponsored road building and other explicit policies that encourage motoring reflect an optimal use of government to stabilize conservative social relations centered on automobility,” Henderson write of the conservative mindset.

Between those two poles are the neoliberals, who have come to dominate City Hall, particularly in the last few years with the ascendancy of Mayor Ed Lee, Board President David Chiu, and Sup. Scott Wiener, who has taken the lead role on transportation issues. Neoliberals rely on market-based solutions to almost any problem, and they end up partnering with either conservatives or progressives in the politics of mobility depending on the issue.

“Neoliberals, consistent with the broader agenda of the privatization of space and market-based pricing of public access to space, envision a mobility system shaped by pricing and markets rather than by regulation and collective action. Unlike progressives, neoliberals feel the built environment must be allowed to develop with the efficacy of the market. Movement, paid for by the individual user, should be unrestrained. Yet such efficacy can include a commodification of nonmovement or slower movement or the package of quality-of-life goods surrounding the ‘walkability’ and ‘livability’ of the city, a package reserved for those who can afford to enter. To that end, neoliberal mobility includes the aggressive use of government to both enhance mobility and rein it in, but only inasmuch as government policy helps realize the goals of profit and facilitating economic growth and development,” Henderson writes.

It’s fascinating to explore how these three distinct mindsets have shaped San Francisco in recent decades, and how they interact today to create the city that we’ll be moving through in the future.