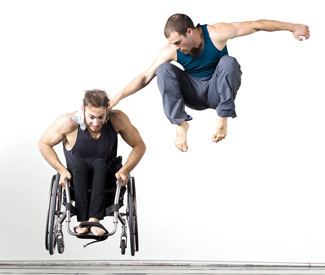 DANCE Despite a last-minute change in the program, AXIS Dance Company’s 25th anniversary concert was a success. Founded as an ensemble for dancers with and without physical abilities, the company started with homegrown choreography that focused on the reason the company came into being. But under the artistic leadership of Judy Smith, AXIS started to stretch its reach by commissioning professional choreographers. Smith realized that it doesn’t matter how good the dancers are; no company can succeed unless it has a solid repertoire.

For AXIS this challenge is particularly acute because so many of its pieces are specifically designed for the company as it is at that moment. It’s not just that dancers with a variety of physical capabilities cannot easily be changed for others with similar strengths and challenges. So-called able-bodied dancers also need a particularly broad perspective on what it means to dance at the top of your abilities.

AXIS choreographers, for their part, have to rethink their own dance making. Many of them — at least those I have talked with — relish the chance to step out of their comfort zone. That’s why AXIS has become the place to see new choreography by people whose work you think you know and, who more often than not, will surprise you.

So to celebrate a quarter century of making dance you can’t see anywhere else with three world premieres seemed both appropriate and something to look forward to. Unfortunately, dance being the high-risk endeavor it is, Murphy’s Law kicked in. A few days before the gala, dancer Emily Eifler got injured. Consequently Amy Seiwert’s The Reflective Surface and Sonya Delwaide’s Dix minutes plus tard (Ten Minutes Later) had to be cancelled for the time being.

The evening did offer one first-rate premiere — Victoria Marks’ gentle and wistful what if would you — and a reconfigured version of Full of Words, Marc Brew’s 2011 look at the vagaries of love.

Marks’ choreography, set to a lively (and live-performed) commissioned score by Beth Custer and her multi-talented band, was for five dancers, but performed only by Joel Brown, Sonsherée Giles, Sebastian Grubb, and Juliana Monin. Still, what if is a remarkable achievement, an appropriate tribute to what AXIS has become.

It started so simply, growing out of an ordinary gesture: the stretched arm with an open hand. Every day, you reach, you touch, and you open and close doors or books. It’s also how we go beyond ourselves. The work, playfully, humorously, but also seriously, raised questions about opportunities, choices, and priorities made or rejected.

We first saw the dancers with their backs to us. They reached for something beyond themselves. But quickly their actions communicated frustration, anger, impatience, or revolt. What was orderly became chaotic — and funny — as they fumbled through repeated short-circuits. A sense of urgency crept in, and they turned to us with “what if” questions.

The piece reached a lovely and unexpectedly gentle climax when each dancer chose a partner from the audience. As the pairs worked together — whispering, touching, reaching, walking — they developed trust. Then they changed partners. Eventually, these interactions grew into an image of community with the obligatory handholding and daisy chains, however messy.

Brews’ Full of Words has been restructured for Brown, who assumed the role of the recently departed Rodney Bell. The piece is less well balanced because Brown, though also a wheelchair dancer, at this point is a less physically articulate performer. So the relationship between him and fellow performer Giles was not as charged as the one she had with an almost frighteningly fierce Alice Sheppard. As a result, Full lost much of its teeter-totter quality.