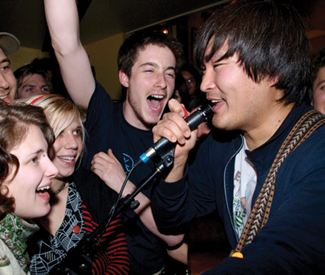 MUSIC When the going gets tougher in the music biz, scrappy little South Bay punk label Asian Man Records has kept on going, downsizing yet sticking to its guns. That means standing by bands that have a chance to jump ship to a bigger imprint — by wishing them well.

Such might be the case with San Francisco’s Wild Moth, which came heavy with its sprawling, epic post-punk on the Mourning Glow EP released by Asian Man last summer, plays this week’s showcase, and has recently completed a full-length. “There’s some bigger labels that might be interested,” says Asian Man’s main man Mike Park, 43, on a recent morning in the office in his mom’s basement garage in affluent, arcadian Monte Sereno, right where it’s been for the past 16 years. “Our thought pattern is we want what’s best for the band. We’re here for you, but we want you to get the best deal.”

DIY, book-your-own-life punk has always hinged on that kind of support to Park, no slouch when it comes to both music-making and community-building. I last spoke to the vet of the South Bay ska scene and linchpin of Skankin’ Pickle about eight years ago when he was embarking on his “Bike For Peace” tour, cycling down the coast along with others to play and raise funds for a local youth center. Five years along from the opening of the first drug- and alcohol-free arts-focused Plea For Peace center in Stockton, Park continues to keep the faith — and to keep Asian Man out of the red — by staying small, though over the years he’s sold more than a 1 million albums by artists as disparate as Alkaline Trio, Andrew Jackson Jihad, the Queers, Kepi Ghoulie, the Lawrence Arms, and Slow Gherkin.

“A lot has to do with, when the music industry started to tank, I had a big jump-start on it,” says Park today. “I felt there was going to be a big turn and I started cutting back quite a bit. Bigger labels were still spending a lot of money and doing well in 2000, but I’ve always been able to turn a profit and, with the present-day music industry, I cut back even more.”

“We’re really upfront with the bands as far as our limitations — and we don’t do much at all!” he continues, chuckling. Yet despite the fact that Asian Man doesn’t harbor a major’s or major-indie’s marketing team (Park employs only one full-time employee besides himself) it does what it can, fostering a space that helps everyone help themselves. “Mostly the bands want to be part of this community. A lot of bands come over and hang out, help us pack records, lend a hand. We try to go to each other’s shows, and bands help out other bands when they tour.”

Park clearly took the lessons of Ian MacKaye’s Dischord Records to heart: keep prices low, maintain integrity, the works. The upcoming show with Wild Moth, the Exquisites, and Shinobu might be considered a good example of punk democracy in action: “They’re all on the same level,” Park says of the groups. “We’re just hoping we get a decent crowd. It’s a test to see how many people we can get out with no real headliner!” He got SF’s Great Apes on the bill because he’s known member Brian Moss since he was a teenager playing music: “He’s a super-talented guy and very supportive of all bands. You can tell some people are into it for what can further their careers, but instead with him, it’s ‘how can I help others?'”

Sounds a little like someone else we know. Still, punks mature, get married, and have kids, much like Park, who, despite an upcoming reunion show for his combo the Chinkees at a ska festival in Las Vegas in May, seems most excited about his latest project: his album of kids music and his kids label, Fun Fun Fun, which aims to release children’s music by punks. So far, the imprint’s Play Date, composed of Greg Attonito of Bouncing Souls and wife Shanti Wintergate, has shown up on NPR, and Park himself won a spot as the “Super Music Friend” on this winter’s Yo Gabba Gabba! Live! tour. “Other than the fact that we try to put out music that isn’t dumbed down, musically, it can pass for any of the records we normally put out,” he explains of Fun Fun Fun’s sounds, “only more G-rated and more educational lyrics.”

Whether he’s teaching kids when it’s safe to cross the street via ska or learning about new hardcore genres from the high schoolers that come by the office to help out, Park certainly can’t be accused of turning into a cranky punk nostalgist, grumbling about awesome mosh pits long gone.

“Punk’s evolved like everything. Things can’t stay the same with technology and the social media tools that artists have,” he says optimistically. “Let’s say there’s an underground show, and it gets canceled. Someone says, ‘Let’s do it at my house and here’s the address,’ and after a social media blast, you have 100 kids in a house in an hour. I remember pre-Internet you’d have to call people, and no one would have a cell phone, and someone would camp out at the old location and say the new location is here. I think it’s kind of cool, to be honest.”