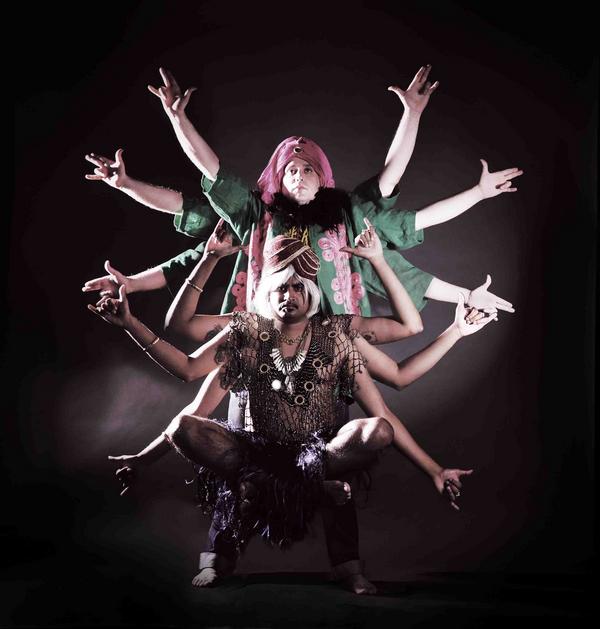 Macca, Hall and Oates, Red Hot Chili Peppers, Nine Inch Nails – what is this, 1976, or ’99? I kid; the Outside Lands 2013 lineup is again a meaty mix of nostalgic, revived, and shiny new acts. There’s the initial punch of a former Beatle slotted alongside NIN, RHCP, plus Jurassic 5, and Willie Nelson, then French synth-pop Phoenix, classic indie darlings Grizzly Bear, the National, Vampire Weekend, and up-and-comers King Tuff, Surfer Blood, the Growlers, along with inspired picks like D’Angelo and the Yeah Yeah Yeahs. Tickets are on sale Thu/18 here.

While the release of the lineup is exciting news, that fest isn’t ’till the end of foggy summer (Aug. 9-11); so focus on the sunny days ahead, the bands that are here now: a reunited King Khan and BBQ Show, the Bay Area debut of both Savages and Lady, plus Night Beats, the 2 Bears, and locals Life Coach and Dreamdate’s Anna Hillburg.

Also, a non sequitur reminder that Record Store Day is this Sat/20. Check a list of supporting shops here. And don’t forget to patronize your local brick and mortar vinyl vendors year-round.

Night Beats
“Seattle’s Night Beats has all of the fixings of a good psych-garage act; the lo-fi recordings, the raspy vocals with punctuated yelps, and the noisily manipulated guitar. But the band, which takes its name from Sam Cooke’s best record, has a direct link to the more soulful breeds of music the title suggests, such as R&B. “Dial 666” is simple, 12-bar blues, “High Noon Blues” borrows sentiment and structure from that genre, and “Puppet on a String” seems to call for some old-fashioned dance moves.” — Laura Kerry
With Cool Ghouls, Primitive Hearts, Big Drag
Wed/17, 9pm, $10
Brick and Mortar
1710 Mission, SF
(415) 800-8782
www.brickandmortarmusic.com
http://www.youtube.com/watch?v=545oNrQqgNY

The 2 Bears
“I don’t need caffeine. My computer just starts playing “Work” by the 2 Bears at 7am, complete with rising organ, a pulsing groove, and motivational chorus: “We’ve got to work harder, for the future, my love we got to work.” It might not even be the best song on Be Strong from the 2 Bears (Hot Chips’s Joe Goddard and the Raf Daddy), as it faces stiff competition from hilarious, cuddly club anthem “Bear Hug” and the uplifting, romantic space dub on “Church.” But, it does the job of getting me moving, and by the time the disco queen vocals kick in I’m likely showered and downstairs having breakfast.” — Ryan Prendiville
With Sleazemore, Richie Panic (Lights Down Low)
Wed/17, 10pm, $15 presale
1015 Folsom, SF
www.1015.com
http://www.youtube.com/watch?v=NxI8QliBOKs

Savages
When all-female British post-punk group Savages hit the East Coast last year for the annual CMJ conference, the word spread quickly to the West: this blistering quartet is one to watch. All these anxious months later, this headlining show will be Savages’ first SF appearance, on the heels of a “spine-tingling” Coachella appearance with “heavy vocals and a fast-paced set that had the crowd cheering in appreciation.”
Thu/18, 8pm, $15
Independent
628 Divisadero, SF
www.theindependentsf.com
http://www.youtube.com/watch?v=6y-cVzbBBQ8

Anna Hillburg
You may already know Anna Hillburg’s sonic touch, without knowing you know her. The Bay Area trumpet player has guested on Dodos and Fresh and Onlys records, and she’s one-third of power-pop girl group, Dreamdate. As she puts it, she’s hella local. Get to know her more intimately on her new self-titled solo album — released on vinyl, March 25 on California Clap. Left to her own devices, the songwriter and multi-instrumentalist hops genre barriers and eras over the course of 13 tracks, mixing classic ’60s pop with girl group harmonies, cry-ing-over-you ballads and dreamy whispers to forlorn lovers, with hat tips to fuzzy ’70s folk, Joni Mitchell, and the like. The only constant is Hillburg’s pleasant and confident crooning. Also, can we talk about this album cover? Perfection.
With Luke Sweeney, Garrett Pierce.
Thu/18, 9pm, $10
Eagle Tavern
398 12th St., SF
Facebook: SFEagle

King Khan and BBQ Show
And they said it wouldn’t happen. Remember all the way back in ’10, when sloppy doo-wop masters King Khan (Arish Khan) and BBQ Show (Mark Sultan) imploded over a series of on-stage arguments on an ill-fated tour? The Canadian garage punk duo has since mended,and has been patching things up with fresh songs and a few short tours. This is Khan and Sultan’s first time back in SF together since the break.
With Sir Lord Von Raven, Wild Eyes SF.
Fri/19, 9pm, $16
Slim’s
333 11th St., SF
www.slimspresents.com
http://www.youtube.com/watch?v=ellItasoK2s

Lady
Yet another SF debut tonight – this one from super-smooth vocalists Terri Walker and Nicole Wrap, a.k.a., the soul duo known as Lady. The London and Atlanta based singers have individually performed alongside the likes of Mos Def, Q-Tip, Missy Elliot, the Black Keys, and Kid Cudi. They paired up over a love vintage soul, recorded an album that’s also called Lady for Truth and Soul Records, and are currently on tour opening for funky R&B-blues headliners Lee Fields and the Expressions.
Sun/21, 8pm, $25
Bimbo’s
1025 Columbus , SF
www.bimbos365club.com
http://www.youtube.com/watch?v=G3IMPYJ7MiY