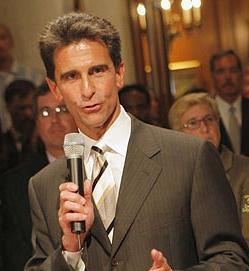 State Sen. Mark Leno is used to facing opposition. His efforts to regulate chemicals, end gender discrimination in insurance, and force cell-phone makers to come clean about radiation levels put him up against some of the most powerful interest groups in the state. He’s fought with Republicans over state spending and taxes.

He’s not used to getting support from right-wing media.

Yet that’s what’s happening now: In an odd political reversal, Leno’s (eminently reasonable) bill to allow cities to explore extending drinking hours is getting flak from progressive groups like Alcohol Justice — and support from the Orange County Register and Fox News.

The Register, which hates all forms of regulation, ran an editorial endorsing Leno’s bill on the grounds that it makes perfect sense for a world where people no longer always work 9-5. (Oh, and it makes sense because there are two many damn laws anyway and we should let people drink when they want.)

Neil Cavuto of Fox News interviewed Leno recently, and his only complaint about the bill was that the procedure for actually getting a late-hours license would be so complicated that even hearing about it was driving him to drink.

That’s the thing: Leno’s bill doesn’t force anyone to do anything. It just sets up a long, complicated process that might, in the end, after extensive public input on the state and local level, allow a couple of bars in a few limited areas (in cities that want to pursue this) to stay open until 4am, as bars in many civilized states already do.

So while Bruce Livingston, who is a decent guy and usually works on good issues, is running around the state trying to get progressives to oppose the Leno bill, the conservatives who usually vote against everything Leno does might wind up on board.

And wouldn’t that be an odd way to get a good bill passed?