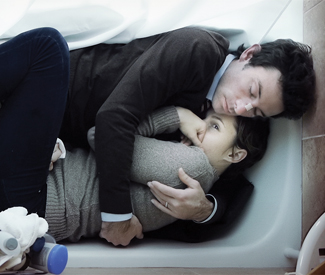 FILM A woman, a man, a pig, a worm, Walden — what? If you enter into Shane Carruth’s Upstream Color expecting things like a linear plot, exposition, and character development, you will exit baffled and distressed. Best to understand in advance that these elements are not part of Carruth’s master plan. In fact, based on my own experiences watching the film twice, I’m fairly certain that not really understanding what’s going on in Upstream Color is part of its loopy allure.

Remember Carruth’s 2004 Primer, the DIY filmmaker’s $7,000 sci-fi tale about time travel? Did you try to puzzle out that film’s array of overlapping and jigsawed timelines, only to give up and concede that the mystery (and sheer bravado) of that film was part of its, uh, loopy allure? Yeah. Same idea, except writ a few dimensions larger, with more locations, zero tech-speak dialogue, and — yes! — a compelling female lead, played by Amy Seimetz, an indie producer and director in her own right.

There are YouTube videos of Carruth’s post-screening Q&A at the 2013 Sundance Film Festival (where Upstream Color debuted and won a prize for its innovative sound design), where he answers “What did that mean?”-type questions with fast-paced references to “the architecture of a story,” “speaking with emotional language,” and his interest in how people who’ve been shattered by trauma fumble their way toward creating new narratives for themselves. Or something.

At any rate, “trauma” is a somewhat mild description of what happens to Kris (Seimetz) at the start of the film. Upstream Color‘s first quarter is its most coherent, appropriate since it takes place before Kris’ health and sanity are compromised by an unnamed character (dubbed the Thief in the credits, and portrayed by Thiago Martins). At first, he appears to be some kind of hipster mad scientist, fiddling with plants and worms in his home lab; there’s no apparent connection between the Thief and Kris — a well-adjusted yuppie type, with a fast-paced job and tasteful wardrobe. This makes it all the more shocking when he stun-guns her in a restaurant and forces her to swallow a worm that turns her into a docile zombie. Before long, she’s emptied all of her bank accounts and signed her house over to him. She snaps out of her fugue state remembering nothing, but the aftereffects are grim: she’s fired, her ATM card doesn’t work, and there are weird things wriggling under her skin.

From there, things go from creepy to confusing, and it takes a few beats to get into Upstream Color‘s new rhythm of randomness. A pig farmer who is also fond of making field recordings and exudes zero menace helps, maybe, Kris by hooking her up to a machine that links her to a piglet and … is that a tapeworm? Then the story moves forward an unknown amount of months or years; the formerly put-together and content Kris is now sporting a chopped-short haircut and a skittish expression. On the train, going to her unglamorous job in a sign shop, she meets the haggard, similarly on-edge Jeff (Carruth) and there’s an instant connection.

Were Upstream Color a rom-com, or even a more conventional sci-fi flick, this pair of lost souls would use their new romance as a springboard for healing. But since “there isn’t a molecule of Hollywood” in Upstream Color — per Carruth, in an insightful post-Sundance interview with Wired magazine — there’s way more abstract weirdness to come, with occasional happy fragments sprinkled in to suggest there’s still hope for Kris and Jeff despite all of their multiple layers of damage.

If it hasn’t already been made clear, enjoying (or even making it all the way through) Upstream Color requires patience and a willingness to forgive some of Carruth’s more pretentious noodlings. (You also have to be OK with having a lot of questions left unequivocally unanswered: why is the pig farmer obsessed with making recordings? Why Walden? Aaarrrgghh!) In the tradition of experimental filmmaking, it’s a work that’s more concerned with evoking emotions than hitting some kind of three-act structure.

Upstream Color has been compared elsewhere to 2011’s Tree of Life, in that it uses avant-garde techniques and focuses on one small story to explore Big Themes. A key difference between Carruth and Terrence Malick — whose poised-to-polarize To the Wonder also opens this week; see Dennis Harvey’s review in this issue — is that Carruth is operating, as mentioned above, completely outside of Hollywood. No Ben Affleck or studio bucks here; Upstream Color was made fast and on the cheap, stars virtual unknowns, and is being self-distributed by Carruth (who, in addition to starring and directing, is also credited as writer, co-producer, cinematographer, composer, and co-editor).

There was word some years back that Carruth’s follow-up to Primer would be an ambitious, medium-budgeted sci-fi epic; it was endorsed by A-listers like Steven Soderbergh. When that fell apart, the story goes, he turned to Upstream Color as his on-my-own-terms rebound project. If that back story influenced his uncompromising (for better and worse) vision for Upstream Color, it’s a subtext that makes the end result even more profound; Hollywood would never take a chance on something so risky as this bold effort, which somehow manages to be both maddening and moving at the same time.