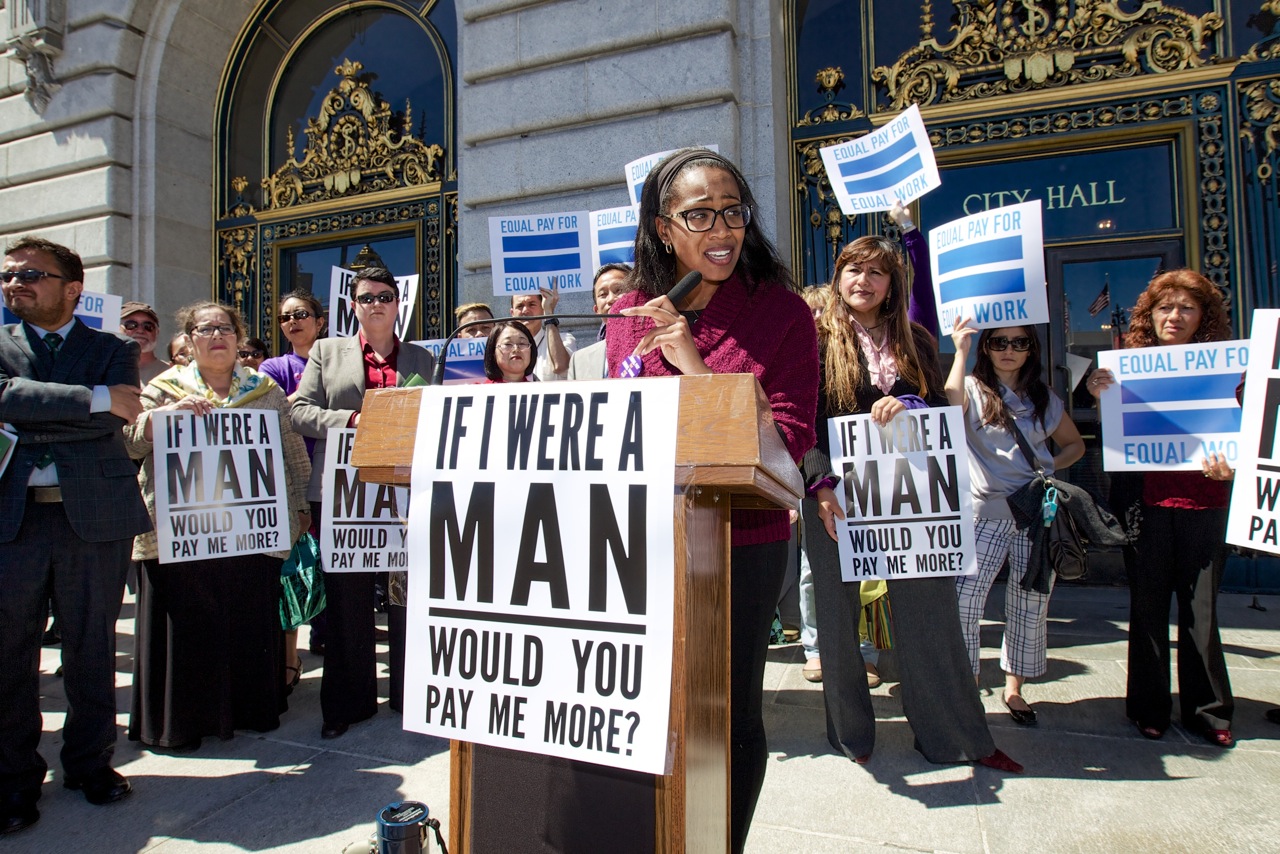 The Board of Supervisors today declared April 9 Pay Equity Day in San Francisco, in recognition of the persistent national gap between male and female financial compensation. But with the city locked in a dispute with SEIU Local 1021 over pay cuts to jobs dominated by women and workers of color, the day took on special local significance. Ahead of the declaration, union members, activists, and supervisors rallied in front of City Hall, chanting against San Francisco’s wage inequality and the general climate of fiscal austerity.

Women in San Francisco earn just 84 cents for every dollar paid to their male counterparts. Although this figure is slightly higher than the national average of 77 cents per dollar, the discrepancy represents a yearly wage gap of $9,968 per year, according to the National Partnership for Women and Families. At today’s press conference in front of City Hall, Sup. Malia Cohen called the gap “unconscionable in a country as wealthy as ours.”

Cohen was joined by Sups. David Chiu and David Campos, who both spoke out against gender-based wage gaps. “It is important for men to speak out,” Chui said. “It wasn’t women who made the decision for pay to be unequal.” Campos went a step further, promising to vote against any budget that further entrenches unequal pay. “I will not support any budget that reflect this discrepancy,” he said.

SEIU Local 1021, which represents over half of city employees, is currently locked in a budget dispute with the city over pay cuts that would adversely affect women and workers of color. The city Department of Human Resources has recommended that the city cut the salaries of 16 categories of city workers, including personnel clerks and nursing technicians, which are disproportionately females and workers of color. The dispute was recently sent to an arbitrator.

“If we can’t achieve it here in San Francisco where are we going to do it?” she asked.

“If you ask Mayor Lee if he supports wage equality, of course he will say yes,” Daly told us. “But in reality, his Department of Human Resources is rolling back progress.” Daly’s repeated requests for Mayor Lee to intervene in the wage-cut arbitration have not yet been answered.
But for the DHR, the recommended cuts have more to do with fiscal reality than gender equality. At a March 7th budget hearing, DHR director Micki Callahan said, “It would be improper to base any decision on demographics.”

She voiced concern over the “root causes” of pay discrepancy, but indicated that these issues fall outside the purview of her department. Spokespeople for the the DHR department have repeatedly assured us that the proposed budget cuts have nothing to do with gender, but rather reflect an effort to bring city salaries in line with market forces.