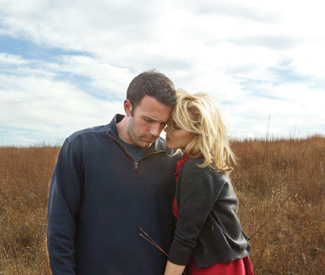 FILM Terrence Malick has had an extraordinary career for a Hollywood hermit making art-house films in an industry that finds him commercially irrelevant and artistically erratic at best. Even his consensus-agreed best movies are the kind that alienate many potential Oscar voters — too abstract, too ambiguous, too poetical, too “European” — so the potential prestige involved is of a marginal critical- and cineaste-appealing stripe no sane US producer would hitch his or her wagon to at this point. Yet Malick’s movies cost money — a lot of money — and it doesn’t all come from international companies willing to take a loss if they can take home some modest returns and major cred toward their next artistic investments.

In a way, it should be a source of joy that Malick keeps getting to make large, personal, indulgent, un-commercial movies when almost no one else does. Other mainstream US filmmakers have had their intellectually or artistically ambitious follies (see: 2006’s Southland Tales and The Fountain, or 1980’s Heaven’s Gate), but they’re generally allowed just one. No one else has had the long ride Malick has. He is indeed a poet, a visionary — but has he ever had more than passages of brilliance? Are the actors and producers who treat him with awe as some exotic shaman actually enabling art, or mostly high-flown pretensions toward the same?

To the Wonder does provide some answers to those thorny questions. But they’re not the answers you’ll probably want to hear if you thought 2011’s The Tree of Life was a masterpiece. If, on the other hand, you found it a largely exasperating movie with great sequences, you may be happy to be warned that Wonder is an entirely excruciating movie with pretty photography. For all but the diehards, it could be a deal-breaker — the experience that makes you think you might very possibly never want to see another by this filmmaker again.

The one movie in which Malick’s variably over-the-top compassion, philosophy, idolatry of nature, and generally spellbound-by-beauty instincts were best supported was 1998’s The Thin Red Line, an abrupt return to activity after two decades’ complete absence. No matter that the reeling narrative bore limited resemblance to James Jones’ novel, or that Adrien Brody’s leading role got almost entirely cut out — he wouldn’t be first or last to cry foul at a Malick edit drastically altered from the original screenplay. To the Wonder apparently employed the talents of Jessica Chastain, Michael Sheen, and Rachel Weisz — all of whom ended up on the cutting room floor. To make room for … what? A movie that could have been wholly shot by the second unit, for all its interest in actual character, narrative, insight, and acting.

Instead, we get handsome shots of Ben Affleck and Olga Kurylenko (or sometimes Affleck and Rachel McAdams) wandering around picturesque settings either beaming beatifically at each other or looking “troubled” because “something is missing,” as one character puts it in a rare moment of actual dialogue. (Generally we get the usual Malick wall-to-wall whispered voiceover musings like “What is this love that loves us?” delivered by all lead actors in different languages for maximum annoyance.)

Just what is missing? Who the hell knows. Apparently it is too vulgar to spell out or even hint at what’s actually going on in these figures’ heads, not when you can instead show them endlessly mooning about as the camera follows them in a lyrical daze. The “plot” goes like this: Neil (Affleck) meets Parisienne Marina (Kurylenko) and her 10-year-old daughter from a failed marriage. They swan about Europe making goo-goo eyes at each other, then mother and child accompany him back to Oklahoma, but it doesn’t work out. Which allows him an interlude to get involved with old flame Jane (McAdams), but that doesn’t work out. Then Olga returns and … just guess. Meanwhile, Javier Bardem turns up as a Catholic priest, playing the Sean Penn Tree of Life role of a peripheral figure that does absolutely nothing but walk around looking bummed.

These people aren’t enigmas, they’re just blanks the actors can’t fill in because the writer-director won’t let them. He wants to express pure emotion, but emotions have contexts, too, much as Malick might like to think that women are all organic instinct. When Sissy Spacek spoke vacant “poetry” and ignored her (murderous) man Martin Sheen’s faults in 1973’s Badlands, it seemed her youthful inexperience was meant to be humorous. But since his career restarted, Malick has suggested dumb ‘n’ ethereal is his feminine ideal. Kurylenko is the apotheosis of that image: she’s part naked sex puppet; part indulged toddler who knows the adults think everything she does is adorable; part twirly-dancing girl at a Dead show; part family dog that only wants to be loved and played with.

Apparently, Malick thinks he’s celebrating femininity, but his appreciation omits the possibility of intelligence. He thinks women are marvelous, instinctual animals, while men bear the burden of emotional and intellectual complexity, even if they can’t articulate it. Could anything be more condescending? (To the Wonder was autobiographically inspired by his own failed marriage to a Frenchwoman; I’d rather see the movie she’d have made about it.)

No doubt some will find all this profound, because they’re primed to and the film certainly acts as though it is. But at some point you have to ask: if the artist can’t express his deep thoughts, just indicate that he’s having them, how do we know he’s a deep thinker at all?

TO THE WONDER opens Fri/12 in Bay Area theaters.