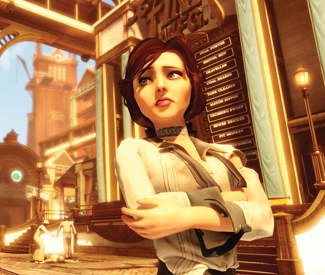 GAMER BioShock Infinite (Irrational Games/2K Games; Xbox 360, PS3, PC) presents an experience that video games are best suited for: plopping players in a captivating fantasy world and saying, “Check it out!” The sequel to BioShock, a first person shooter set in a city beneath the sea, Infinite takes us instead to the clouds, in an alternate version of 1912 America that includes a floating city called Columbia.

Columbia is perhaps not as interesting an environment as Rapture, that underwater metropolis from the original BioShock, but few locations in gaming can match the claustrophobia and terror that decaying city evoked, and Columbia has charms all its own. With its barber shop quartet that sings an a capella version of the Beach Boys’ “God Only Knows,” and its well-populated artificial beach complete with turn-of-the-century boardwalk pavilion, the desolation felt within Rapture’s ruins is replaced by liveliness. If you ever wished you could have wandered the underwater city before its fall, Columbia is the next best thing.

Infinite‘s narrative twists American history into something sinister, and it is almost startling to stumble upon locations and characters that remark on intensely political subjects like classism and race relations — this, in a game where the principal mechanic is to shoot people’s faces. As the game begins, former Pinkerton agent Booker DeWitt is hired to retrieve a young woman who is held captive within the city. Haunted by his collusion in the slaughter of Native Americans in the famous Wounded Knee Massacre of 1890, DeWitt appears to be a prototypically gruff, emotionally damaged male protagonist … but there are hints that not all is as it seems.

Infinite‘s idiosyncrasy could result only from having handed the creative reins over to an auteur game designer, and Infinite‘s singular vision springs from the mind of Ken Levine, chief architect of the BioShock franchise. It was Levine’s union of narrative and mechanics that elevated the original game from shooter to thesis subject and Infinite does not disappoint as the follow-up entry to his abstract game theory. To say more would spoil the fun, but any game attempting to challenge players intellectually is a curiosity in an industry that designs its games largely by committee and consensus.

On the down side, Infinite‘s shooting mechanics remain among the least of its triumphs. Even with a gallery of magical abilities called vigors that allow you to perform such feats as hurling fire or actual crows at your enemies, firefights tend to feel like mere barriers to more content. Perhaps Infinite‘s ambitions to be an experience took precedence over the game play, but to walk the city streets of Columbia is alone worth the price of admission. Liberty, justice, nightmare-churros, and animatronic George Washingtons for all!