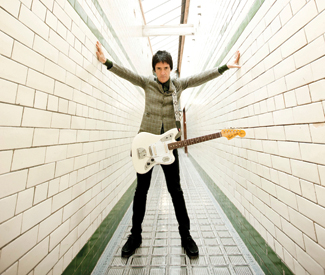 MUSIC Every passing year, the clamor gets louder; the rumors get more outlandish. An all-vegetarian Coachella. Fifty million dollars for five shows. Sixty-seven copies of the movie version of Moby Dick and a football helmet full of cottage cheese. While the rest of the world waits with baited breath for his old band to reunite, the perpetually unfussed Johnny Marr simply gets on with it, focusing on what’s ahead instead of what’s behind.

Since the Smiths called it quits in 1987, their ever-reliable guitarist has stayed more than busy. He’s been a full-time member of myriad different groups, such as Modest Mouse, the Cribs, and The The, while finding time to start a few bands of his own, notably his criminally underrated collaboration with New Order/Joy Division’s Bernard Summer, Electronic. He’s also an accomplished producer and has made countless guest appearances.

Surprisingly, it took the serial band-jumper 25 solid years to make the decision to strike out on his own. “The record really only happened because I had all these ideas that I wanted to turn into songs,” Marr says during our phone call. “I had been touring for such a long time, and I decided that I had to go into the studio and turn these ideas into songs. I didn’t have the plan of doing a solo album, rather I just had this need to get all of these songs recorded. It all happened totally organically.”

The result is The Messenger, an impressive return to form that shows the 49 year old still has a hell of a lot left to say. Over the album’s 12 tracks, Marr sounds refreshed, focused, and teeming with inspiration. From the direct battle cry of an opener, “The Right Thing Right,” to the punchy, double-stop stomp of “Generate! Generate” to the moody, lush “New Town Velocity,” Marr shows off his underrated songwriting chops and warm vocals. Though there is plenty of sonic variation, he manages to stay out of Dad Rock zone by mostly staying in his lane and letting his signature top-notch guitar work do much of the heavy lifting.

As with any Marr release, the guitars come first, second, and third, and the master is up to his old tricks again. Deliciously intricate arpeggiated riffs? Check. Triumphant, cascading melodies? Check. That signature, impeccable jangle? Stop me if you think you’ve heard this one before (sorry, had to). Though he has fairly limited vocal range, his impeccable playing more than makes up for it, and most of the real memorable melodies (i.e. the soaring “European Me”) come courtesy of his legendary Fender Jaguar.

While Marr’s guitar heroics are worth the price of admission, it’s not the only fascinating thing about the fertile LP. As the consummate sideman to some of the biggest personalities (read: egos) in music — Morrissey, Isaac Brock, Chrissie Hynde — he hasn’t ever really needed to divulge much about the man behind the music. While you’re never going to get cathartic confessionals from the private, low-key Marr, he offers listeners plenty of enlightenment into his perspective.

“Really, it’s just a lot of my own personal observations, about my environment. It’s about the world as I see it,” Marr says. “I wanted it to be about the speed of life that I live.”

After drawing rave reviews on a run of shows across the pond, Marr rolls into town to play the first solo SF shows of his storied career. Sporting a nice mix of Smiths classics, hidden gems, and new material, Marr’s ardent spirit has spilled over into his live performances.

“We’ve been playing 11 new songs every night, and it’s really all gone down well,” Marr says. “Every night feels like a celebration, and people are really digging it…This group has a sound that really suits us, and we only play old songs that fit that sound, which really makes the old ones feel like new songs.”

One of the things that always stood out most about Marr was his incredible ability to make it all look so damn easy. No matter how complicated the guitar line, you’d never see a pained look on the perpetually dapper guitarist’s face. He famously wrote three all-time great songs — “William, It Was Really Nothing,” “How Soon Is Now?,” and “Please, Please, Please Let Me Get What I Want” — in one weekend. For that reason, we shouldn’t be surprised that he has taken all the break-ups, rumors, and changes with a nonchalant grace, constantly focused on moving forward rather than looking back….no matter how much everyone seems to want him to.

“Definitely what I’m doing now is a new chapter,” Marr concludes. “I’ve always believed in moving forward with everything I do, and I’m excited for this next step.”

Translation: If you are waiting for that dream Smiths reunion, you might want to stop holding your breath and give The Messenger a spin.