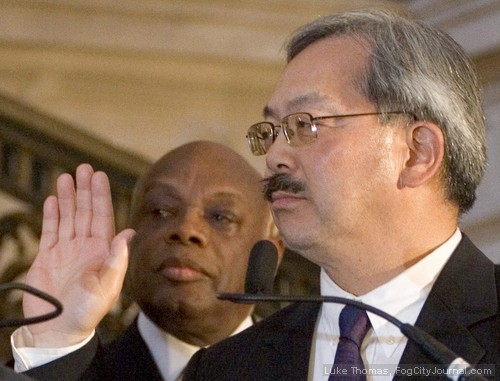 [UPDATED(x3)] Mayor Ed Lee barely had time to unpack from his recent political junket to Paris before he was off on his current trip to China – both of which were paid for and accompanied by some of his top political supporters and among the city’s most influential power brokers. No wonder Lee doesn’t have time to weigh in on Airbnb’s tax dodge, the condo conversion stalemate, or other important city issues.

Local good government advocate Charles Marsteller learned of the current China trip from Willie Brown’s column in Sunday’s San Francisco Chronicle, whose editors (including Editor Ward Bushee, who we’re still waiting to hear back from about this trip) consider it a “man about town” column immune from conflict-of-interest policies that normally require journalists to disclose who is paying them on the side.

“I’m here with Mayor Ed Lee for my seventh official visit,” Brown cheerfully wrote, although readers were left to wonder just what official business Brown might be conducting with our mayor and his entourage. So, being an expert on political disclosure laws, Marsteller went down to the Ethics Commission to pull the Form SFEC-3.216(d) that state law requires elected officials to file before leaving on trips paid for by outside interests.

But it wasn’t there, so Marsteller filed an official complaint with the commission, telling us, “I did so to impress upon our Elected and other City Officials the need to properly report gifts in a timely way and in the manner as called for by State law and on the forms provided by the SF Ethics Commission.”

When we contacted mayoral Press Secretary Christine Falvey, she forwarded us a copy of the form that should have been filed before the trip and told us, “I’m not going to answer the question about why we failed to file the appropriate forms with the Ethics Commission, as we worked closely with the City Attorney’s office to exceed reporting requirements by all appropriate deadlines.” [UPDATE: The time stamp on the form indicated it was filed on May 25, before the trip, even though it wasn’t publicly available at the Ethics Commission office when Marsteller went down to look for it].

The form indicates that Lee’s portion of the trip was paid for by the San Francisco Chinese Chamber of Commerce, whose influential leader Rose Pak conspired with Brown to get Lee appointed mayor more than two years ago. This is also the same Rose Pak who was admonished by the state’s Fair Political Practices Commission for illegally funding another political junket to China in 2009 with Sups. David Chiu and Eric Mar and then-Sup. Carmen Chu, who Lee appointed as Assessor earlier this year.

Those officials were forced to repay the expenses after the FPPC found that Pak, that time acting under the auspices of the Chinese New Year Festival Committee, was not allowed to make gifts exceeding $420 per official that year. “Please be advised that since the Chinese New Year Festival Committee is not an organization that falls under Section 501(c)(3) of the Internal Revenue Code, no public official may accept gifts of any type from this organization valued in excess of the applicable limit,” FPPC counsel Zachary Norton wrote in an Aug. 22, 2011 enforcement letter to Pak.

In other words, because this committee and “other 501(c)(6) chamber of commerce organization[s]” are in the business of actively lobbying top elected officials for favorable policies, rulings, and projects, they are barred by ethics law from giving them the gifts of big overseas political junkets. As Marsteller noted in his complaint letter, violations are punishable by fines of $5,000 per violation, or if they are “willful violations of the law” – which doing the same thing you were sanctioned for just two years ago certainly might be considered – the criminal penalties are $10,000 per violation or up to a year in jail.

Mayor Lee’s portion of the trip cost the Chamber $11,970, according to the form. But this time, to get around the FPPC restrictions, Pak seems to have passed the hat among various business elites to fund the trip. The mayor’s form shows that 41 people paid up to the current gift limit of $440 “to defray the cost of the mayor’s trip.”

Among others who tagged along for the trip are Public Works Director Mohammed Nuru (who has a history of political corruption under Mayors Brown and Newsom and no clear business being on a Chinese trade delegation, but who doesn’t love a free trip?!), Kofi Bonner from Lennar Home Builders, Harlan Kelly with the SFPUC, Jay Xu with the Asian Art Museum, the wives of Lee and Bonner, Kandace Bender with San Francisco International Airport, and Mark Chandler with the Mayor’s Office of International Trade and Commerce.

It’s not clear who paid for those other public officials or even what they were doing there. [UPDATE: Department of Public Works spokesperson Rachel Gordon told us that Nuru paid for the trip himself, but that he’ll be studying China’s instrastructure, from its separated bikesways to greening of public rights-of-way, as well as meeting with Chinese businesses involved in the redevelopment of Hunter’s Point. “He’s been looking at a lot of the infrastructure in China,” Gordon said. “I expect a dozen if not more ideas when he returns.”] Then again, it also wasn’t clear why venture capitalist Ron Conway – Lee’s top campaign fundraiser and possible reason for publicly subsidizing big tech companies, including many that Conway funds – joined and helped sponsor Lee’s recent trip to Paris. This is just how business gets done in San Francisco.

“Willie Brown is the former Mayor of San Francisco,” Falvey told us when we asked why Brown was on the trip and what its purpose was. “The purpose of the trip is to promote San Francisco, its local manufacturing, cultural exchanges, he is signing an MOU and meeting with high level, new Chinese government officials.”

[UPDATE 4/5: Marsteller has withdrawn his complaint from the Ethics Commission alleging the mayor’s form wasn’t filed on time, but he and another citizen have filed separate complaints with the FPPC alleging the trip and its funding mechanism may violate the agency’s 2011 ruling against Pak.]