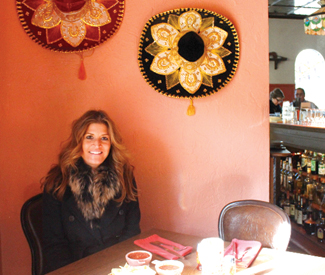 FEAST Even for fans of cutting edge culinary creations, there is something undeniably sublime about a simple homecooked meal. We here at the Guardian want you to know that even though your mom’s killer casserole may be miles away, the chance to nosh on quality family recipes is not. Here are five spots in San Francisco where tasty menu offerings have received generations of approval.

Romina Tiberia has been working and cooking at her grandfather’s restaurant in Rome since age six. Today, she’s the owner of Cineccitta Ristorante and Bar Tiberia, serving her family’s authentic Roman recipes in the intimate, cinema-themed North Beach spot.

Everything at Cineccitta is made from scratch, according to Tiberia. “We don’t buy anything from the can,” she told the Guardian. “We are really proud to say that. And not from the jar either!” To give her pizza an authentic Roman taste Tiberia imports her flour, yeast, oil, cheese, and meats from Italy.

For a taste of Tiberia’s family treasure, try the boscaiola pizza. It’s thin, buttery, nearly transparent crust is baked on a pizza stone imported from the motherland.

The boscaiola is topped with mushrooms, fresh tomato sauce, mozzarella, and the eatery’s specialty orange peel sausage. Of this last ingredient, Tiberia tells us, “that’s a very old tradition. It’s very unusual. That was my grandfather’s recipe.”

“I create an environment that feels like home,” says the North Beach restaurateur. “It’s simple food, but it’s good food, and that’s what I like to share with people.”

Henry Nguyen opened the Lower Pacific Heights gem My Father’s Kitchen as a way to keep busy in his retirement. But since the 11-table eatery opened in 2010, it’s become the neighborhood’s go-to spot for traditional Northern Vietnamese comfort food, definitely providing enough work to keep Nguyen on the move.

Nguyen grew up in the city of Haiphong, where his father owned a restaurant. His family’s authentic pho recipe is a consistent favorite among his customers these days, served with a chicken or beef broth and laced with rice noodles and eye of round steak, brisket, and flank.

True to Nguyen’s heritage, My Father’s Kitchen specializes in Northern Vietnamese dishes, which are characterized as being less spicy, without the overpowering flavors found in their Southern counterparts. The tastes of My Father’s Kitchen are balanced, subtle, and soothing. Visitors to one of the many nearby medical facilities take note, Nguyen’s pho is superb if you’re feeling under the weather.

For 50 years, Tia Margarita has been an Inner Richmond favorite, with killer Mexican food. Fans might be surprised to learn that the family who owns the local haunt isn’t of Mexican descent.

Today, original owners Alex and Virginia Hobbs’ granddaughter and current manager of Tia Margarita Jennifer Corwin says today’s menu is nearly identical to the kitchen’s offerings from a half-century ago. The bestselling item from that original lineup is still the chile relleno.

“Personally I think it’s very hard to find a chile relleno made properly,” Corwin tells the Guardian. “Usually they are either flat or really greasy. I pride myself on ours. People love them.”

For the more calorie-conscious, Corwin recommends Jennie’s Special, a salad made of black beans, cheese, shredded lettuce, pounded chicken breast seasoned with asada spices, sliced jalapenos, with a creamy dressing — served on the side, of course.

When we asked Richard Park if anything on his menu was derived from a family recipe his immediate response was, “oh yeah, basically all of it.” Park and his wife Pam Schafer are the owners of Cathead BBQ in the SOMA. Specializing in some good ‘ole Southern cooking, it seems almost impossible that the menu not include strong familial influences.

Giant buttery breads and Coca-Cola soaked meats are Down South traditions but as far as heritage dishes go, Park recommends his dandelion green potato salad — a fresh spin on one of his German family’s favorites. The dish, often made by her mother and grandmother, is traditionally a piping hot mix of mashed potatoes and dandelion greens. To compliment the finger lickin’ barbeque Cathead is known for, Schafer transformed his childhood favorite into a cold potato salad made with Yukon potatoes, creamy buttermilk, green onion and vinegar dressing, and fresh dandelion greens.

AN THE GO’S GARLIC NOODLES

Track down this bright red food truck parked somewhere in the city and expect to find an impressive line. What’s everyone waiting for? The truck’s signature dish: a generous serving of garlic-inflected noodles topped with a skewer of your choice (beef, pork, chicken, shrimp, or veggie). The recipe for these chewy noodles belong to the An family, who opened up one of San Francisco’s first Vietnamese restaurants Thanh Long back in 1971.

The technique involved in cooking the fresh and doughy noodles with a pungent garlic kick is a long-kept family secret. William Norling, who helps run the An the Go food truck, says “everyone always says ‘I tried to make it at home but I can’t make it taste same.’ They’re a funky texture.”

Self-billed as the purveyors of the first garlic noodle on the West Coast, the An family restaurant empire hinges on its family recipe. Maybe secrets don’t make friends, but it sure seems like secret recipes make plenty.