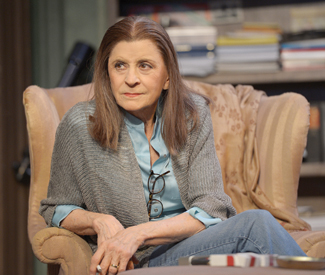 THEATER Speaking of oneself in the third person is a thing few figures outside of fiction can really pull off. Tarzan and Yoda, fine. Oriana Fallaci — well, in journalist-playwright Lawrence Wright’s new two-hander, Fallaci, you could be forgiven for thinking the title character is not that real either.

But she was. And in a way the cartoonish aspects of this clunky bio-play do some unintentional justice to the sillier and more reckless and reprehensible qualities of the influential Italian journalist and war correspondent known for her confrontational interviews with powerful men like Henry Kissinger and the Ayatollah Khomeini, as well as for her post-9/11 book-length screeds against Islam.

Berkeley Rep’s production, directed by Oskar Eustis of New York’s Public Theater, opens on a sixtysomething Oriana Fallaci (Broadway veteran Concetta Tomei donning Italianate gestures) at home in her book-cluttered New York brownstone as a young New York Times reporter comes calling. Maryam (a somewhat anemic Marjan Neshat), a fictional creation of the playwright’s, is an Iranian American journalist tasked with preparing the obituary on the famous Italian now battling cancer (such an assignment being a standard practice at the paper for subjects of hefty historical stature). We soon learn that Maryam, who has idolized the older woman since the latter famously threw off her chador during her interview with Iran’s Khomeini, “fought like a tiger” for the assignment.

She gets past Fallaci’s initial brush-off a bit too easily to be believed, but secures a 25-minute interview with her cagey and self-aggrandizing heroine. Early on, Fallaci lets drop several casual racist dismissals of Iranians, Mexicans, and others as she recounts the highlights from her storied career and slowly opens up (or seems to) about her personal life, especially her father and the child she lost. Maryam, who seems to have all of Fallaci’s published writings memorized, is quick to recognize inconsistencies, however, and to call her out on them. “This is a lesson for you, huh?” prods Fallaci. “Find the lie.”

Fallaci’s master class in the art of the interview is baldly spelled out a little further on: the interviewer is out to violently expose her subjects, insists Fallaci, to lay them bare, but ultimately as an “act of love.” This, indeed, is the dynamic set up, in both directions, between Fallaci and her protégé-antagonist who defends a moderate version of Islam against the older woman’s insistence that “moderate Islam does not exist,” and so on. Several years pass and Maryam returns to confront Fallaci again. By now Maryam is a best-selling author herself (she seems to have written a book reminiscent of Azar Nafisi’s Reading Lolita in Tehran). She has also become a more devout Muslim and, moreover, has returned from an Iranian prison where nothing less than the intervention of Fallaci seems to have saved her from execution. However, now it’s Fallaci’s turn to dig into Maryam’s father complex —producing in no time a revelation as crassly dramatic as it is impossible to take seriously in so heavy-handed a form.

As if the mishmash of citation, exposition, and motivation that makes up the dialogue were not wearying enough, each time the dramatic tables turn in this play they creak so loudly you want to hide under your seat. Equally strained and unconvincing are the roughly managed philosophic debate about the relation between truth and drama and the half-hearted infusion of operatic overtones — naturally, and far too predictably, Fallaci’s story lends itself to the comparison, and it asserts itself like an afterthought in a dry-ice moment at the end.

But more disconcerting than the clichéd premise and the poor staging (which includes uneven, often leaden performances) is the way the relationship at the center of the play has a way of sweeping fundamental issues, and serious charges, under the carpet in the name of a shared admiration and soul-bearing. Those interested in a more serious investigation of such subject matter would be better off at Yerba Buena Center for the Arts, where the current gallery exhibition, “Without Reality There Is No Utopia” (through June 9; www.ybca.org), provides a lively critical engagement with the vast false narratives of the age, including the role of media and journalism in the ideologically laden construction of historical truth.