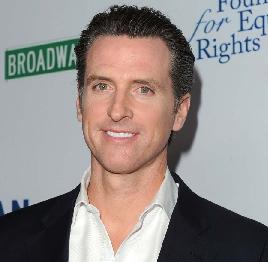 Gavin Newsom sat down for an hour with Brian Edwards-Tiekert of KPFA’s Up Front, and the show is remarkable. Brian was a little less harsh than Steven Colbert, who (properly) said the Gavster’s new book, Citizenville, needs “a bullshit detector” and that “everything in there could be carved on a stone and put in someone’s garden,” but he did a great job putting Newsom’s book in the context of state and local politics and he tried valiently to pin the lite guv down — on anything.

Up Front is on at 7 am, and that’s a little early to start on the bourbon (even by my standards), but I was so tempted to do the Gavin Newsom Platitude Drinking Game … and fortunately, I linked to the recorded archive above to so you do it yourself tonight. Every time Newsom says “engagement,” take a shot. Everytime he says “robust,” take two. Don’t worry — when he talks about fracking, you’ll need to throw up anyway.

Newsom’s basic argument is that the public needs to get more involved in government, and that the generation just coming of political age is used to crowd-sourcing and peer-to-peer communication, and that technology can allow politicians to have “a real conversation with the public.” (Oh, and he talks about “transparency,” although his mayor administration was openly hostile to sunshine and public records.)

Whatever; that’s all fine, as far as it goes. Holding virtual “town hall” meetings is a nice idea; asking the public how to solve city and state problems makes good sense. Some people in office already do that.

But the notion that we can fix what he calls a “broken system” entirely by adopting private-sector models and using digital devices ignores (as Brian pointed out repeatedly) the reality of American politics. “Most of society’s problems,” the KPFA host noted, “are rooted in who has the power.”

There are tough issues that require not more “conversation” but real leadership — and strong stands. If Newsom had “crowdsourced” his decision on same-sex marriage back in 2004, it never would have happened.

Same goes for Prop. 13, prisons v. education, the state’s tax system — and the dramatic divide between the rich and the poor. That and the fact that the state doesn’t raise enough revenue in taxes on big business and the wealthy to provide decent services.

Brian notes that the state cut dental care for poor people; “either the money is there for dental care or it isn’t.” Newsom countered that there’s enough volunteer and private-sector help out there to solve all these sorts of problems that the government can’t pay for. He’s just wrong; there isn’t. You cut dental care and people’s teeth get worse and worse and some of them get very sick.

His response to the need for more state money? Growth. Same as what the Republicans say. No wonder Newt Gingrich loves the book so much.

Then after ducking questions about Prop. 13, oil severance taxes, and tax policy in general (excpet to say that we need to expand sales taxes — the most regressive of all — to cover “services” — he got to fracking.

Brian asked him about the expansion of hydrofracking in California, and Newsom refused to come out against it. All he said was that “we’re not going to do anything that’s not done right.” Huh? There’s a “right” way to do fracking?

You want to throw up what’s left of your Newsom Platitude Drinking Game consumption at the very end, when he talks about the Twitter tax break and the cost of housing in San Francisco. His basic message? Bummer that it costs so much to live here. Not much we can do. “It’s a challenge,” he says, “that’s the burden of success.”

Success for some. Challenge for others.