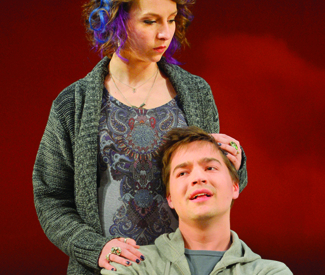 THEATER An average of 22 veterans a day committed suicide in the United States in 2010, according to a report last year by the U.S. Department of Veteran Affairs. Chris Kyle, however, was not likely to be one of them. The former Navy SEAL and author of a best-selling memoir had returned from military deployment in Iraq with a bounding enthusiasm for succeeding in civilian life, not least by helping other veterans with war-related trauma. Last month, on a shooting range in North Texas, a fellow vet apparently suffering from PTSD shot and killed Kyle, by then renowned as the U.S. military’s all-time deadliest sniper.

Irony like this defies fiction. But then that’s something George F. Walker understands. When the acclaimed Canadian playwright levels his pen at his primary target — he cruelly exploitative class system we inhabit back here on the “civilized” and oblivious home front —the result is dark and powerful comedy. A case in point is Dead Metaphor, his new play about a well-intentioned former army sniper facing a dismal job market and family pressures back home who goes to work for a right-wing candidate of the Michele Bachmann stripe. The world premiere comes to the Bay Area courtesy of an admirable production by American Conservatory Theater under the astute direction of Irene Lewis. As very serious as it is very funny, Dead Metaphor rings like the report from a not-so-distant battlefield.

Five months back from military duty, and despite hearing nothing good about the government’s job placement services, Dean Trusk (a winningly cheerful, subtly shaded George Hampe) finally puts himself before the local job counselor (a dryly comical, increasingly disconcerted Anthony Fusco). After all, Dean has to consider his pregnant ex-wife (a smart, scrappy Rebekah Brockman) now that he’s defied expectations by coming back home alive and she’s accordingly re-marrying him. He also has an increasingly erratic and absent-minded father (a charmingly earthy, alarmingly volcanic Tom Bloom) coming unhinged by an as yet undiagnosed disease, and his brave but reeling mother (a heartbreakingly genuine Sharon Lockwood) who is faced with the prospect of having to soon place him in an expensive managed care facility.

The job counselor is unsettled by Dean’s ingenuous highlighting of his “high-level kills” on the battlefield as testament to his employable “efficiency” but, finally disarmed by the young man’s honorable sincerity, gets him a position as a coffee-fetching assistant to his politician-wife—a coldly calculating true believer of the now-mainstream Far Right (played with just the right mixture of acumen, conviction and parodic excess by an excellent René Augesen). The job exposes a rather blasé Dean to some campaign shenanigans his wife quickly deciphers as illicit, leading to a crisis for the couple as his moral compass swings first away from such dirty work and then back toward a desperate deal that might save his family from destitution.

Cast on a rotating set that moves an assortment of indoor and outdoor furnishing into and out of focus (against scenic designer Christopher Barreca’s semi-circular panorama of cloud-flecked sky), the story is a merry-go-round of insiders and outsiders, wheeling and dealing, war and peace, loyalty and opportunity, and truth and appearances. Act one in particular carries real force in the shrewd balance it strikes between razor-sharp comic dialogue and all-too-believable situations. This force attenuates somewhat in act two’s increasingly far-fetched details and strident humor. Nevertheless, the story remains anchored to a clear-sighted purpose, manifested in an unnerving and thought-provoking ending. Moreover, every scene along the way is engaging and often a sheer delight, propelled by fine acting, consistently hilarious and caustic dialogue, unexpected pangs of heartache, and a devilishly intriguing plot.

There seems to be a new raft of war-related dramas on stages lately (Word for Word’s You Know When the Men Are Gone being among the more recent, as ACT itself gets ready to bring in the internationally acclaimed Scottish production, Black Watch), but few use humor so powerfully to indict the hypocrisy and self-destruction of a society committed to permanent war. When tragedy repeats itself this long, suggests Dead Metaphor, it can only be played as farce.