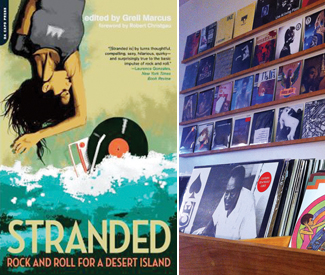 TOFU AND WHISKEY “Rock and roll has never been remotely monolithic,” early Rolling Stone columnist Greil Marcus writes in the introduction to the 1978 book he edited, Stranded: Rock and Roll for a Desert Island (Da Capo Press). “There have always been countless performers to pin your hopes on; though one may have found identity as a member of an audience, one also found it by staking a place in that audience, defining one’s self against it.”

He recalls a time when all rock fans simply had to have an opinion about the Beatles, about Elvis, but notes there’s is no longer a single figure that “one has felt compelled to celebrate or denigrate.”

“The objects of the obsessiveness that has always been a part of being a rock and roll fan…are no longer obvious,” he continues, “which means, for one thing, that while one’s sense of the music may not have perfect shape, it’s probably a lot richer.”

Marcus wrote these words in Berkeley in the late ’70s, though they ring truer today. For Stranded, Marcus invited rock critics such as Lester Bangs, Ellen Willis, and Nick Tosches to answer the basic parlor game question in essay form: “What one rock-and-roll album would you take to a desert island?” He’ll read from the book this Thu/14 at 6pm at a new record shop, also called Stranded, 6436 Telegraph, Oakl. (www.strandedinoakland.com).

The brick-and-mortar Stranded opened about five months ago (in November 2012) and is run by Oakland’s Steve Viaduct, the 36-year-old founder of Superior Viaduct records, an archival label that focused on reissues and archival collections of Bay Area punk and post-punk for its first year and is now in the process of expanding its output. One of those releases was MX-80 Sound’s ’77 album, Hard Attack, which is the record Viaduct says he‘d take to a desert island.

Since the Stranded opened, there have been a handful of shows and author appearances, along with the everyday bustle of record obsessives. “We had pretty modest goals [for Stranded]. We wanted a cool place to hang out and meet other vinyl enthusiasts. With no budget for things like advertising, our biggest milestone has been that we are breaking-even financially and we are having fun doing it.”

I asked Viaduct what bands best exemplified the ethos of the label and shop, and instead he chose a book: “That is a tough question because Superior Viaduct is very much a work in progress. Perhaps the best example of the label’s ethos is our first book, From the Edge of the World: California Punk 1977-81, by photographer Ruby Ray. The photos are amazing. Ruby captures a moment that barely existed in the first place, yet still resonates today.”

Marcus’ appearance came naturally. A noted lover of vinyl, he’d stopped by Stranded a few times and gave the owners of a copy of his book. When Viaduct found out his friend had chosen the book for her Rock N’ Roll Book Club, he decided it was time to invite Marcus to speak at the store. After that, the next events at the shop are Dawn McCarthy and Bonnie “Prince” Billy performing live in-store (March 31), then Rock and the Pop Narcotic author Joe Carducci reading May 3.

Given the crumbling of big box music chains and the US economy as a terrifying whole, it’s a particularly troublesome time to open a store of any kind, let alone one mostly focused on physical music — though there are shining examples to the contrary, such as Burger Records and Amoeba Music — so I was intrigued by the store’s arrival.

“Buying records in stores is more fun for customers and shopkeepers,” Viaduct says, shrugging off the concern. “The personal contact really makes a difference. There is nothing better than to recommend something and a day or two later the person comes back and says, ‘Thanks! That record is great.’ Of course, we know that folks can buy records online, so we do not even try to compete with that.”

One of those shining star examples of making it work in the name of the music you obsessively collect — fellow East Bay record shop and label, 1-2-3-4 Go! (www.1234gorecords.com) is this month celebrating five years in Oakland.

Also noteworthy: the label will be 12 come August (time for a Bar Mitzvah?). It’s notable for discovering and releasing records by trash, thrash, psych, punk, garage, surf, doo-wop, whatever local acts along the lines of Nobunny, Shannon and the Clams, Personal and the Pizzas, Lenz, and Synthetic ID.

With its move to a bigger space, the store is now also noted for its all-ages shows, with many of the above frequenting the location along with out-of-towners from LA and beyond. For the five-year marker, the shop is having a big sale on March 23 and 24, and will celebrate further with its second annual the Go! Go! fest May 16 through 19.

I asked label-store owner Steve Stevenson, a 33-year-old Oakland resident, the same question as Viaduct regarding the problems with opening a store such as this. Stevenson perhaps had it rougher, as his doors first opened in that very tumultuous year of ’08.

“2008 was brutal but there was a ton of support. I had no money to advertise but for the first three weeks I was packed with people who had heard about this record store that was barely bigger than a walk-in closet,” he says. “Honestly, the store struggled for the first three or so years; always making it but always just barely. Since moving in to this new space, things have really taken off. I’m able to hire employees so I don’t have to do everything myself which gives me time to do even more cool stuff for the store and book shows outside of it at places like New Parish.”

“We’re one of the very few record stores in the East Bay and we exist through the support of this community and our mail order customers around the world,” he adds. “We’re always growing, expanding, and trying new things because of this support and there’s no way I can say how much I appreciate it. It’s massive.”

Is Afrolicious the hardest working world band in the Bay Area? It seems to pop up everywhere. The 12-piece Latin soul-tropical Afrobeat act met at Elbo Room’s energetic weekly Afrolicious party, and is this week playing the Great American Music Hall in celebration of its debut full-length album California Dreaming, released on its own label, Afrolicious Music. With Midtown Social Band, Afrolicious DJs Pleasure Maker and Senor Oz.