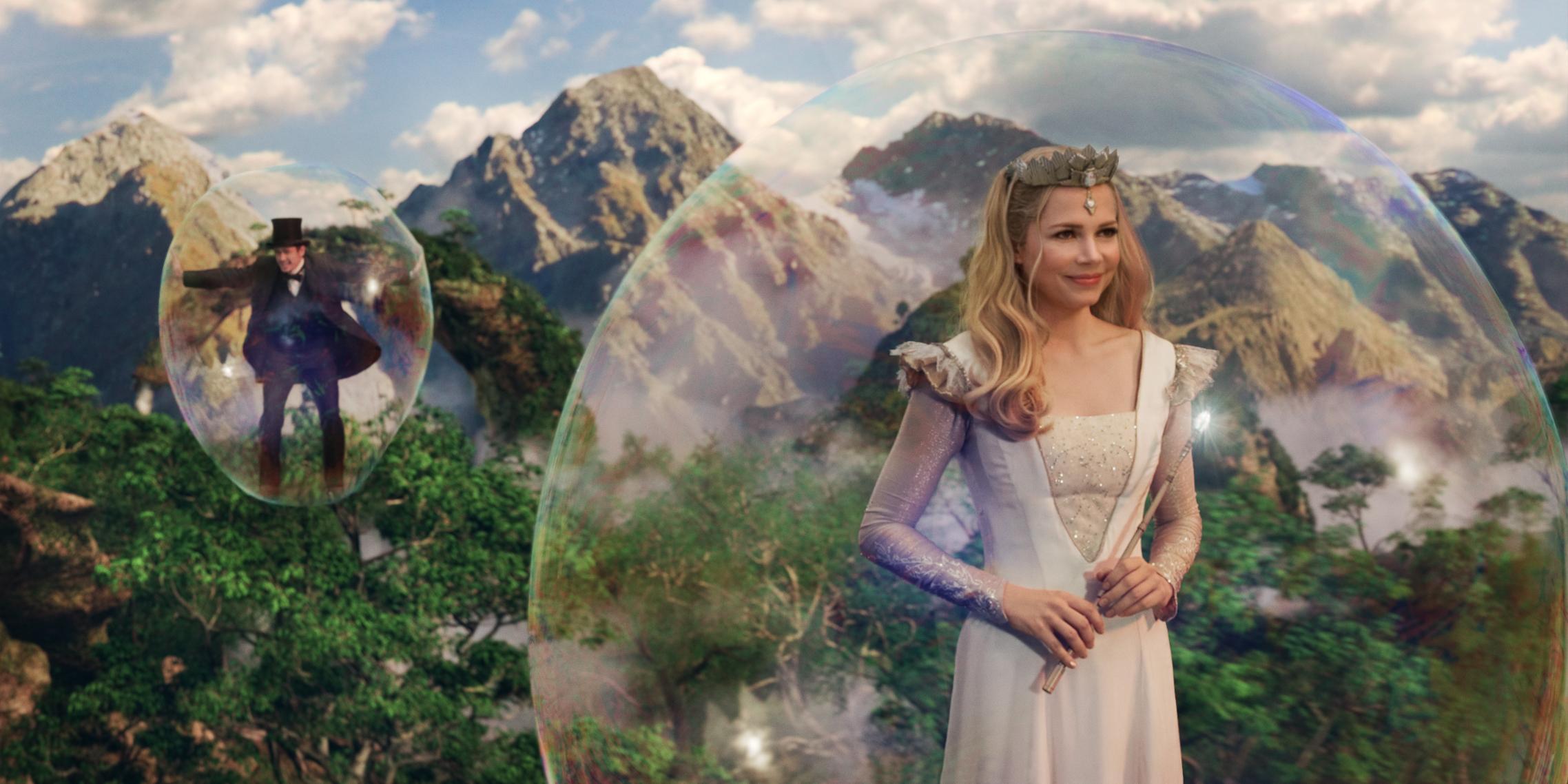 Literally something for everyone this week: pregnant women, environmentalists, Mumia supporters, World War II buffs, Latin American history buffs, Abbas Kiarostami fan club members, German and French-film devotees, and anyone who’s ever dreamed of going over the rainbow (in 3D). I hope you don’t sleep much because this weekend is jammed up with new flicks.

Barbara The titular figure (Nina Hoss) looks the very picture of blonde Teutonic ice princess when she arrives — exiled from better prospects by some unspecified, politically ill-advised conduct — in at a rural 1980 East German hospital far from East Berlin’s relative glamour. She’s a pill, too, stiffly formal in dealings with curious locals and fellow staff including the disarmingly rumpled, gently amorous chief physician Andre (Ronald Zehrfeld). Yet her stern prowess as a pediatric doctor is softened by atypically protective behavior toward teen Stella (Jasna Fritzi Bauer), a frequent escapee from prison-like juvenile care facilities. Barbara has secrets, however, and her juggling personal, ethical, and Stasi-fearing priorities will force some uncomfortable choices. It is evidently the moment for German writer-director Christian Petzold to get international recognition after nearly 20 years of equally fine, terse, revealing work in both big-screen and broadcast media (much with Hoss as his prime on-screen collaborator). This intelligent, dispassionate, eventually moving character study isn’t necessarily his best. But it is a compelling introduction. (1:45) (Dennis Harvey)

Birth Story: Ina May Gaskin and the Farm Midwives When Ina May Gaskin had her first child, the hospital doctor used forceps (against her wishes) and her baby was sequestered for 24 hours immediately after birth. “When they brought her to me, I thought she was someone else’s,” Gaskin recalls in Sara Lamm and Mary Wigmore’s documentary. Gaskin was understandably flummoxed that her first experience with the most natural act a female body can endure was as inhuman as the subject of an Eric Schlosser exposé. A few years later, she met Stephen Gaskin, a professor who became her second husband, and the man who’d go on to co-found the Farm, America’s largest intentional community, in 1971. On the Farm, women had children, and in those confines, far from the iron fist of insurance companies, Gaskin discovered midwifery as her calling. She recruited others, and dedicated herself to preserving an art that dwindles as the medical industry strives to treat women’s bodies like profit machines. Her message is intended for a larger audience than granola-eating moms-to-be: we’re losing touch with our bodies. Lamm and Wigmore bravely cram a handful of live births into the film; footage of a breech birth implies this doc could go on to be a useful teaching tool for others interested in midwifery. (1:33) Roxie. (Sara Maria Vizcarrondo)

Emperor This ponderously old-fashioned historical drama focuses on the negotiations around Japan’s surrender after the bombings of Hiroshima and Nagasaki. While many on the Allied side want the nation’s “Supreme Commander” Emperor Hirohito to pay for war crimes with his life, experts like bilingual Gen. Bonners Fellers (Matthew Fox) argue that the transition to peace can be achieved not by punishing but using this “living god” to wean the population off its ideological fanaticism. Fellers must ultimately sway gruff General MacArthur (Tommy Lee Jones) to the wisdom of this approach, while personally preoccupied with finding the onetime exchange-student love (Kaori Momoi) denied him by cultural divisions and escalating war rhetoric. Covering (albeit from the U.S. side) more or less the same events as Aleksandr Sokurov’s 2005 The Sun, Peter Webber’s movie is very different from that flawed effort, but also a lot worse. The corny Romeo and Juliet romance, the simplistic approach to explaining Japan’s “ancient warrior tradition” and anything else (via dialogue routinely as flat as “Things in Japan are not black and white!”), plus Alex Heffes’ bombastic old-school orchestral score, are all as banal as can be. Even the reliable Jones offers little more than conventional crustiness — as opposed to the inspired kind he does in Lincoln. (1:46) (Dennis Harvey)

Greedy Lying Bastards Longtime activist Craig Rosebraugh (a former spokesperson for radical groups the Animal Liberation Front and the Earth Liberation Front) makes his directorial debut with Greedy Lying Bastards, a doc that examines the climate-change denial movement. The briskly-paced film — narrated in first person by Rosebraugh, and jam-packed with interviews — begins with stories from homeowners devastated by recent Colorado wildfires, and visits a tribal community perched on Alaska’s eroding shores. But while it touches on global warming’s causes, and the phenomenon’s inevitable outcome (see also: 2006’s An Inconvenient Truth), the film’s particular focus is lobbyists who’ve built careers off distorting the facts, leading Tea Party rallies, and chuckling condescendingly at environmentalists on Fox News — and the fat cats who’re pulling the strings: the dreaded Koch brothers, ExxonMobil execs, and others. Rosebraugh owes a hefty stylistic debt to Michael Moore — right down to his film’s attention-grabbing title — and, like Moore’s films, Greedy Lying Bastards seems destined to reach audiences who already agree with its message. Still, it’s undeniably provocative. (1:30) (Cheryl Eddy)

Harvest of Empire This feature spin-off from Juan Gonzalez’s classic nonfiction tome aims to temper anti-immigration hysteria with evidence that the primarily Latino populations conservatives are so afraid of were largely invited or driven here by exploitative US policies toward Latin America. Dutifully marching through countries on a case-by-case basis, Peter Getzels and Eduardo Lopez’s documentary covers our annexing much of a neighboring country (Mexico) and using its citizens as a “reserve labor force;” encouraging mainland immigration elsewhere to strengthen a colonial bond (Puerto Rico); covertly funding overthrow of progressive governments and/or supporting repressive ones, creating floods of political asylum-seekers (Guatemala, Cuba, Nicaragua, El Salvador); and so on and so forth. Our government’s policies were often justified in the name of “fighting the spread of Communism,” but usually had a more pragmatic basis in protecting US business interests. The movie also touches on NAFTA’s disastrous trickle-up effect on local economies (especially agricultural ones), and interviews a number of high achievers from immigrant families (ACLU chief Anthony Romero, Geraldo Rivera) as well as various activists and experts, including Nobel Peace Prize winner Rigoberta Menchu, while sampling recent years’ inflammatory anti-immigrant rhetoric. There’s a lot of important information here, though one might wish it were packaged in a documentary with a less primitive, classroom-ready episodic structure and less informercial-y style. (1:30) (Dennis Harvey)

Like Someone in Love A student apparently moonlighting as an escort, Akiko (Rin Takanashi) doesn’t seem to like her night job, and likes even less the fact that she’s forced into seeing a client while the doting, oblivious grandmother she’s been avoiding waits for her at the train station. But upon arriving at the apartment of the john, she finds sociology professor Takashi (Tadashi Okuno) courtly and distracted, uninterested in getting her in bed even when she climbs into it of her own volition. Their “date” extends into the next day, introducing him to the possessive, suspicious boyfriend she’s having problems with (Ryo Kase), who mistakes the prof for her grandfather. As with Abbas Kiarostami’s first feature to be shot outside his native Iran — the extraordinary European coproduction Certified Copy (2010) — this Japan set second lets its protagonists first play at being having different identities, then teases us with the notion that they are, in fact, those other people. It’s also another talk fest that might seem a little too nothing-happening, too idle-intellectual gamesmanship at a casual first glance, but could also grow increasingly fascinating and profound with repeat viewings. (1:49) (Dennis Harvey)

Long Distance Revolutionary: A Journey with Mumia Abu-Jamal Or, almost everything you ever wanted to know about the guy who inspired all those “Free Mumia” rallies, though Abu-Jamal’s status as a cause célèbre has become somewhat less urgent since his death sentence — for killing a Philadelphia police officer in 1981 — was commuted to life without parole in 2012. Stephen Vittoria’s doc assembles an array of heavy hitters (Alice Walker, Giancarlo Esposito, Cornel West, Angela Davis, Emory Douglas) to discuss Abu-Jamal’s life, from his childhood in Philly’s housing projects, to his teenage political awakening with the Black Panthers, to his career as a popular radio journalist — aided equally by his passion for reporting and his mellifluous voice. Now, of course, he’s best-known for the influential, eloquent books he’s penned since his 1982 incarceration, and for the worldwide activists who’re either convinced of his innocence or believe he didn’t receive a fair trial (or both). All worthy of further investigation, but Long Distance Revolutionary is overlong, fawning, and relentlessly one-sided — ultimately, a tiresome combination. Director Vittoria in person at the film’s two screenings, Fri/8 at 6:30pm and Sat/9 at 3:30pm. (2:00) New Parkway. (Cheryl Eddy)

Oz: The Great and Powerful Providing a backstory for the man behind the curtain, director Sam Raimi gives us a prequel of sorts to 1939’s The Wizard of Oz. Herein we follow the adventures of a Depression-era Kansas circus magician named Oscar (James Franco) — Oz to his friends — as he cons, philanders, bickers with his behind-the-scenes assistant Frank (Zach Braff), and eventually sails away in a twister, bound for a Technicolor land of massively proportioned flora, talking fauna, and witches ranging from dazzlingly good to treacherously wicked. From one of them, Theodora (Mila Kunis), he learns that his arrival — in Oz, just to clarify — has set in motion the fulfillment of a prophecy: that a great wizard, also named Oz, will bring about the downfall of a malevolent witch (Rachel Weisz), saving the kingdom and its cheery, goodhearted inhabitants. Unfortunately for this deserving populace, Oz spent his last pre-twister moments with the Baum Bros. Circus (the name a tribute to L. Frank Baum, writer of the Oz children’s books) demonstrating a banged-up moral compass and an undependable streak and proclaiming that he would rather be a great man than a good man. Unfortunately for the rest of us, this theme is revisited ad nauseam as Oz and the oppressively beneficent witch Glinda (Michelle Williams) — whose magic appears to consist mainly of nice soft things like bubbles and fog — stand around debating whether he’s the right man for the task. When the fog clears, though, the view is undeniably pretty. While en route to and from the Emerald City, Oz and his companions — among them a non-evil flying monkey (voiced by Braff) and a rather adorable china doll (Joey King) — wander through a deliriously arresting, Fantasia-esque landscape whose intricate, inventive construction helps distract from the plodding, saccharine rhetoric and unappealing story line. (2:07) (Lynn Rapoport)