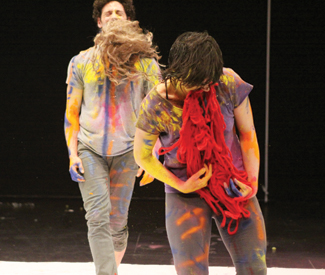 DANCE CounterPULSE always makes a point of thanking its volunteers. One can only hope that they’ll turn up en masse to help clean up after Faye Driscoll and Jesse Zaritt step off the stage this coming weekend. Their You’re Me is not exactly what might be called a clean show. Still, if the work-in-progress preview, presented at the end of their residency at the Headlands Center for the Arts almost two years ago, is any indication, the mess is more than worth it. After all, most of us will recognize a mess when we see it.

The Los Angeles-born Driscoll lived in San Francisco from 2003 to 2005. She put in a shift at the ODC/Pilot Program — for on-the-verge choreographers — even though dance was not her primary focus at the time. As she explained in a recent phone conversation from her home in Brooklyn, in San Francisco, “I really was inspired by the music and art scene, hanging out with people who were putting band together that were kind of art bands.” At the time, she was in recovery mode from two years of performing and touring with Doug Varone and Dancers. Apparently it had not been all that happy a match — too much structure, too much energy from the top down.

So San Francisco — where the mantra is “you can do anything you want,” and where you go “to find yourself” — proved to be liberating experience for her, particularly because she had been so “serious and disciplined about dance” since her childhood.

In some ways Driscoll is still trying to find herself. On the most visible level You’re Me is a piece about a relationship — after all, it is performed by a man and a woman. But it’s also a work looking at identity: the one you claim for yourself, that one you are working toward, or the one that is imposed on you by the outside world. For many people that is unstable territory that tends to slide away from under your feet.

Partly because she “had a lot going on in my home that was kind of crazy,” and because she remembered people reflecting an identity back to her that was quite different than the one she experienced herself, Driscoll was drawn to dance early on. “Dance had the structure that allowed me to express what I am in the world,” she says. “It was the place where I could go and practice my movements and make myself open to other people’s bodies.”

You’re Me is inspired by the in-between spaces Driscoll observes in non-verbal human communication, as well as by fixed historic representations she and Zaritt collected in the visual arts, from Renaissance paintings to contemporary magazines. In the process they became fascinated by how ideas of what is masculine and feminine have changed over time. Finding much that resonated but also created dissonance within themselves, the experience fed into their appetites for trying out other identities.

To do that choreographically, in one section of the five-part 80-minute duet, the two performers also draw on one of the earliest ways kids try to tell us something about who they are. A little girl who wobbles around in her mother’s heels is considered cute. A little boy who prefers dresses to pants rings alarm bells. Role-playing, fantasy games, make-believe, dress-up —whether in a playgroup or the theater — are serious business. They present way of talking about being or becoming in the world. But they are also a lot of fun.

Driscoll describes her working process as taking “things and blowing them up, creating them to excess and putting them into rhythmic structure and try to pull them apart and grapple with them.” Here, in addition, to the physically demanding movement interactions, the dancers have to don, strip off, and exchange parts of props and costumes, often at dizzying speed. They rehearsed a lot, she says, and they have a prop master who makes sure that the final mess is nicely controlled.

Pulling You’re Me together, however, was a different challenge. Like many artists, Driscoll is homeless, scurrying around from one studio to another. “I could never rehearse with all that stuff I had to lug around.” That’s why the residency at Headlands became such a respite: they gave her a closet. *