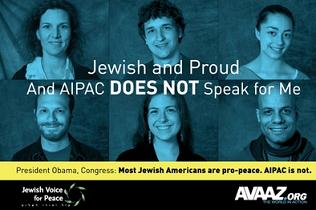 Ahead of the American Israel Public Affairs Committee’s three-day policy conference in Washington DC, Oakland-based Jewish Voice for Peace and Avaaz.org blanketed the DC Metro with provocative anti-AIPAC posters. The $100,000 marketing campaign features images of young Jews with the words: “AIPAC does not speak for me. Most Jewish Americans are pro-peace. AIPAC is not.” The posters, which are part of a larger campaign to counteract AIPAC’s strong and hawkish influence on American foreign policy, will run for two-weeks in the DC Metro.

The March 5-7 AIPAC conference attracts pro-Israel activists from around the country and this year features an address by Vice President Joe Biden. AIPAC spends nearly $3 million a year lobbying Congress and enjoys widespread support from both major political parties. But according to JVP Executive Director Rebecca Vilkomerson, Jewish-American frustration with AIPAC is mounting.

JVP’s high-profile ad campaign is designed to appeal to more liberal American Jews who are uncomfortable with AIPAC’s continued support for conservative US foreign policy priorities. “AIPAC is the NRA of foreign policy lobbies, it pushes a right-wing agenda that in no way represents the majority of Jewish Americans,” JVP Spokesperson Sydney Levy told the Guardian.

JVP endorses the controversial Boycott, Divestment, and Sanction (BDS) movement which seeks to isolate Israel internationally through a sustained divestment from Israeli institutions. This position has drawn criticism from other local Bay Area Jewish organizations and Levy said JVP has been barred from using space at the San Francisco Jewish Community Relations Council.

During the ongoing conference, AIPAC is expected to launch a campaign to convince Congress to exempt Israel aid from the sequestration budget cuts. But JVP is calling on its grassroots network of more than 35 local chapters to oppose the campaign. “In the era of sequestration, where every item is on the table – from Medicare to Head Start – why isn’t aid to Israel on the table?” asks Levy.