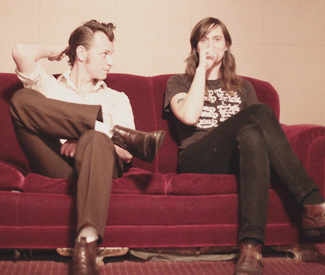 TOFU AND WHISKEY This week? It’s Pony Time. No, that doesn’t mean we’re taking you to Ikea for meatballs. I’m talking about the band, which will be traveling here soon, and given its predilection toward weird news and pop culture, I feel like it might enjoy the above reference.

Seattle’s Pony Time (www.facebook.com/ponytime) has songs with titles like “Hex on You,” “Lesbian Mayor” and simply, “Kathleen Hanna” (all of which are on recently released Per Se Records LP, Go Find Your Own). It also has cassette for sale called Pony Time Can Drink 100 Wine Coolers.

“We definitely try to be a good band and write cool songs,” says drummer-singer Stacey Peck, the female half of the duo, “but we don’t take ourselves very seriously. We just wanna shred and eat candy.” And with that, Pony Time stole my heart. It’ll have the opportunity to do the same for you, with a slot opening for Stickers and Creepers on Fri/8 at the Hemlock Tavern, 1131 Polk, SF; www.hemlocktavern.com.

The poppy, garage punk twosome, made up of Peck and singer-baritone guitarist Luke Beetham, has been making fun, cool-but-not-serious music since it first got together in the chilly Pacific Northwest back in 2009, around the time Peck left her former band, Telepathic Liberation Army. And fun is the optimal word here — every song on Go Find Your Own is hand-clap worthy, particularly album opener, “What if You Caught Me.”

Most of the tracks are playful pokes at pop culture with broader reaching cultural references (such as the “Kathleen Hanna” song). The band says it takes musical inspiration from Fleetwood Mac, Sonic Youth, the Breeders, and Stickers. Though it is also claimed to be most interested in: Star Trek the Next Generation, LGBTQ rights, feminism, hair pomade, cats, and again, candy.

I asked Peck if Hanna has heard the song bearing her name, but Peck doubts it. The band did however recently get to play with another formative riot grrrl act, Team Dresch. “It was really fun, they are really cool people and continue to shred very hard,” Peck says of the show with her personal heroes at Chop Suey in Seattle a few months back. Peck went on to pen an article for Vice about the experience, in which she opened with, “I was invited to play this show by my ex-girlfriend’s new girlfriend for their new feminist organization (Nth Wave) as a benefit for marriage equality so it turns out I am one of the gayest people on earth.”

I asked what the Hemlock crowd can expect during Pony Time’s performance and Peck said, “Expect the drums to fall apart and Luke to look amazing.” Cute.

Singer-songwriter (and former Geographer member) Kacey Johansing (www.kaceyjohansing.com) released her stunning sophomore album, Grand Ghosts, last week. And how grand it is. Lush, moody, and dreamy, too. There’s a welcome maturity to Johansing’s voice (oft favorably likened to that of Joni Mitchell), a confidence that glides over twinkling piano and subtle, far-away strings, in tracks such as album opener “River” and title track “Grand Ghosts.”

Johansing’s expert blend of classical, jazz, and folk influences comes together well on “Out to Sea,” with the subtle sound of fingers moving over downbeat acoustic guitar meeting Johansing’s melancholy, “I don’t want you to go/but I want you to be true/what’s best for me is not what’s best for you.” Even her harmonized “oh, oh, ohs,” sound emotive here, giving the sweetness a little gut-punch.

The haunting album as a whole pays tribute to loved ones that died during the making of the record (actual ghosts), along with her current Bay Area home, and her upbringing in Colorado (emotional ghosts), and features accompaniment by Robert Shelton (of DRMS) on keyboards, Andrew Maguire (Honeycomb) on vibraphone and percussion, James Riotto (the Moanin Dove) on bass, Jeremy Harris on guitar, pianos, and string arrangements, and Ezra Lipp on drums. The LP is available for purchase/download on her Bandcamp page

Jittery San Francisco punk trio Rank/Xerox plays live far less as of late since one of its members moved down to LA, which is a damn shame, because the DIY band always puts on a good, loud show. With Violent Change, Pure Bliss.

You remember the Bronx, the hyped-up, hyper-masculine, swaggering LA punk band whose 2003 self-titled debut exploded with that cover of a blood-dripped mouth spelling out the band’s name (probably one of the last covers ingrained in your brain from the waning days of ye olde Virgin Megastore or Tower Records). The butch band returns this month with new album, IV, its first in five years — and yes, it’s just as blistering, and face-melting as ever. With Flogging Molly.

THE RELATIVES AND THE JAMES HUNTER SIX

And speaking of face-melting…fire-and-brimstone gospel-funk outfit the Relatives will be in the Bay this weekend too. This is an entirely different kind of melt though. The long-running Dallas, Texas act (which formed in 1970) just this year finally released its debut LP, The Electric Word. Never has five singers preaching the gospel sounded so psychedelic. The band opens for Grammy-award winning rhythm and blues act the James Hunter Six, which recently released third LP, Minute By Minute (GO Records/Fantasy).