Home CCSF board approves report to accreditors amid heavy criticism 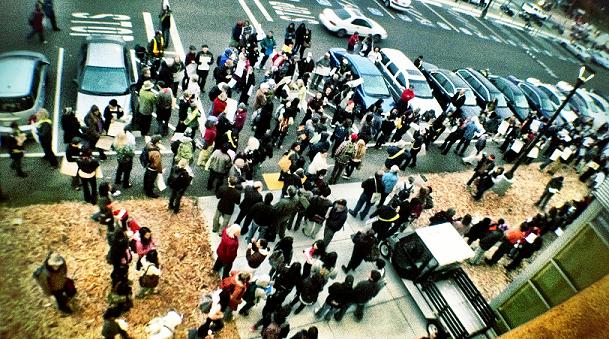 Windsong, a 21-year-old City College student, held a sign that read “I love CCSF” while standing along Ocean Avenue last evening, as cars rolled by honking their support for the embattled school.

“I love learning while not being bound by the four-year school structure,” she said. She’s an artist in residence at a local elementary school, and was protesting to make sure City College of San Francisco could give her students the same opportunities she had.

“This place is in my heart,” she said. And she wasn’t alone.

Nearly 200 protesters lined the building outside of City College’s board of trustees meeting last night as the CCSF Board of Trustees approved the school’s “Show Cause” report, which is a 220-page document detailing what the college has done to meet its accreditation requirements — accreditation is required for a college degree to have worth, and for a school to receive state funding.

In short, it’s a document arguing what the college has done to improve since it was hit with sanctions last October, and why it should stay open and accredited. The report is due to the accreditation commission on March 15.

The Accrediting Commission of Community and Junior Colleges hit City College with a “show cause” sanction, citing a lack of progress in six problem areas the school was supposed to address since its last accreditation review six years before. When the accrediting commission came back to check on the school, it concluded City College had yet to address key areas, including measuring Student Learning Outcomes, and adequately funding their reserve, a “rainy day fund” the college leans on in hard times.

City College said that it has now met the challenge of those key problem areas. “We were deferring maintenance, and deferring (upgrading) technology,” said board president John Rizzo. “We’re required to spend money, and this gives us a plan going forward.”

But the shouting protesters outside the meeting and the angry students inside disagreed with some points of the plan. Proposition A was a parcel tax measure approved by voters in November that would raise somewhere between $14-16 million City College annually, which the board wanted to use to beef up the college’s reserve fund, one of the key areas where they were knocked by the accrediting commission.

California Federation of Teachers president Joshua Pechthalt implored the board to use Prop A funds for current teachers. “The men and women who work in this college spent many hours taking money out of their pockets to pass Prop A,” Pechthalt said in public comment to the board. The audience of about a hundred or so faculty and students cheered. “I would ask you to work closely with faculty and staff, that you work collaboratively with them.”

Pechthalt was there at the behest of Alisa Messer, the president of City College’s American Federation of Teachers Local 2121. Teachers at City College have had wage freezes for years, and most recently had an 8.8 percent wage reduction just this past month.

Part-time teachers were hit too, as nearly 40 of them were “not rehired” for the current semester, as well as 18 counselors and 30 members of the college’s staff..

“I missed class to come to this fight,” Madrigal said to the board. “But if I didn’t come here there wouldn’t be a class to miss.”

One by one, faculty and students implored the board to use Prop A funds to buffer the college’s wage reductions and layoffs. At one point, student Eric Blanc, a member of the protest group Save CCSF, came to the podium to speak in public comment and was cut off by the board. Ten or so other students and faculty had yet to speak, and were told there was no longer time.

Blanc then demanded of the board his time to speak. The campus police chief, Andre Barnes, and an officer approached Blanc and tried to remove him from the room. The tension in the room mounted as the audience started chanting “let him speak, let him speak!”

Trustee Rafael Mandelman diffused the situation, asking for silence and calmly explaining that the board needed time to conduct its business. Tensions rose again though as the topic of the college’s reserve fund came up — the reserve is now at $4 million, but the school is planning to boost it to $13 million by 2014, and $18 million by 2019.

It’s a needed safety net, the trustees argued, for a school with a budget hovering at more than $200 million a year and an economy that’s in the tank.

“Tomorrow the sequestration will begin, and it will impact California spending and our communities,” Trustee Steve Ngo said. “This [money] is going to faculty and staff, but in the future. Faculty and staff would not have to take cuts in wages, if we had funded the reserve.”

Ultimately, the board voted to approve its long term reserve fund plan, using Prop A funds to help buffer the reserve for the future. Blanc told the trustees that they had denied themselves other options, like suing the accreditation commission, or asking for emergency funding from City Hall.

“I think behind the rhetoric of this are thousands of people being shut out,” he said.

Vice Chancellor Peter Goldstein, who handles college finance, said that some of the claims of the protesters were inaccurate.

“I keep hearing people talking about cutting classes,but that’s not our plan for [fiscal year] 13-14,” he said. “In fact, this college is putting together a budget for next year that will have more classes than this year.”

The college may not be cutting classes, but it is asking everyone to do more with less. Teachers to teach with less salary, students to fit into larger classrooms, and for classes soon to fit into fewer campuses.

Whether those are improvements or dire straits depends on who you ask.

Save CCSF plans to march to City Hall to demand aid to CCSF and to protest austerity cuts at the college on March 14. For more information visit http://www.saveccsf.org/.