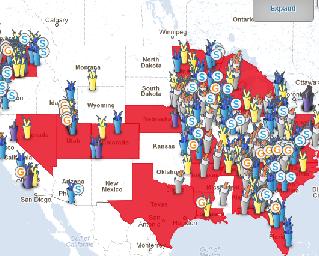 There’s a fascinating new map that the Institute for Local Self Reliance has put together that shows how 342 communities around the United States are now offering publicly owned, cheap, reliable broadband and cable service to local residents and businesses. Check it out here. Then check out why the fastest networks in the nation are built by local governments:

“It may surprise people that these cities in Virginia, Tennessee, and Louisiana have faster and lower cost access to the Internet than anyone in San Francisco, Seattle, or any other major city,” says Christopher Mitchell, Director of ILSR’s Telecommunications as Commons Initiative. “These publicly owned networks have each created hundreds of jobs and saved millions of dollars.”

Then sit back and ask yourself why you’re paying so much money every month for the rotten service you get from Comcast and AT&T. Ask your friends, ask around work; is anyone really happy with their broadband service? Do you think you’re getting a good deal for the price?

When I saw the map I called Mitchell, and he told me that every one of the cities and towns on his map has been successful with public ownership. “Within five years, everyone is either making money for the general fund or breaking even and offering really low rates,” he said. “The real benefit is lower prices, which leaves residents with more money in their pockets, which tends to get spent in their communities where it helps local business.”

Most of the cities that have muni broadband (and cable TV!) also have municipal electric power systems, which makes the whole thing easier. But Santa Monica did it bit by bit, installing fiber every time one of the streets was torn up for plumbing, sewers, etc. and gradually building out a network that so far only connects businesses but can be expanded as the money comes in. San Francisco streets are torn up all the time, and will be torn up regularly as water and sewer lines are replaced. The biggest expense of laying cable is cutting open and repaving streets; the cable itself is fairly cheap.

In some states, the big private telecoms have pushed through state legislation banning muni broadband — but not in California. San Francisco has every legal right to get into this business.

So why aren’t we doing it already? “What’s missing,” Mitchell said, “is the political will to really piss off Comcast and AT&T.”

I was just looking at the map when I got an email alerting me to this lovely discussion between Mayor Ed Lee and the head of PG&E, talking about the private utility’s plans to invest $1.2 billion in local infrastructure (more on that in a future blog post). That’s going to involve a lot of digging up streets. So what does Mayor Lee say? Maybe we could allow PRIVATE companies to lay fiber at the same time.

I want to throw up.