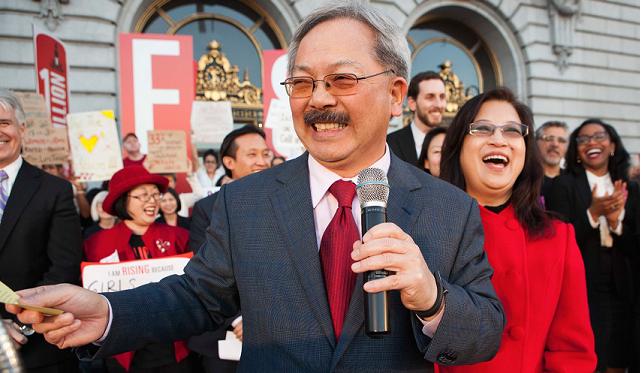 While the looming federal budget cuts known as sequestration were designed to equally hit Democratic and Republican party priorities, from social services to the military budget, in the Bay Area they would disproportionately target society’s most vulnerable citizens and strain already-stretched local agency budgets.

If Congress and the White House fail to forge a budget deal by March 1, the cuts could begin to withdraw $9-10 billion of federal support from the California. In the Bay Area, these cuts would have the biggest impact on low-income families, the homeless, victims of domestic violence, adults living with AIDS, and children ages 3-5.

Back in September, San Francisco Mayor Ed Lee signed a U.S. Conference of Mayors’ letter that called on federal lawmakers to resolve the budget conflict before the sequestration cuts could take effect, labeling the budget cuts “a threat” to local economies nationwide. Now, with the deadline looming, city officials and social service providers across the Bay Area are bracing for the impact. Depending to how the cuts are eventually allocated, San Francisco alone could lose more than $10 million in critical social services.

“All across the city, the sequestration hurts those most in need of services and support,” Gentle Blythe, spokesperson with the San Francisco Unified School District, told the Guardian.

San Francisco Unified stands to lose $3.8 million in funding, over 5 percent of the district’s federal education dollars. The cuts would strain an already-tight education budget, which has suffered from the slow economy and the corresponding dip in tax revenue. “We’ve been in a climate of cuts for years,” Blythe said. “There is a definite sense of fatigue.”

The pending round of cuts would force San Francisco district officials to make a series of uncomfortable decisions. The bulk of San Francisco’s federal education funding comes from Title I and Title III grants, money specifically earmarked for low-income students and English-language learners. If the state does not step in to fill the hole, the $3.8 million shortfall will translate into a significant rollback of services for the city’s most at-risk students and potential layoffs of teachers and resource officers.

Early childhood programs are especially vulnerable to the impact of the sequester. San Francisco Head Start Director Marjorie Weiss told us the demand for these federal education programs is spiking as more San Francisco children are living in poverty.

US Census figures show 13.8 percent of San Francisco residents were living below the federal poverty line in 2011, up from 12.2 percent in 2005. Over the last decade, 850 additional children became eligible for SF Head Start, which operates federally funded preschool programs in 19 classrooms at 9 different centers across the city.

These programs significantly improve the long-term employment and educational prospects of children living in or near poverty. But as the need for these early-childhood services grows, the money is drying up. Over the last two years, state and local funding for early-childhood education has be cut by nearly 20 percent.

Now, with the sequestration looming, San Francisco Head Start providers are worried about their ability to continue providing services. “At Head Start, we have already been dealing with years of budget cuts,” Weiss told us. If the sequester comes through, the program will lose an additional $1.1 million and will be forced to eliminate programming for more than 100 low income children ages 3-5.

“This will be devastating. These cuts will have a crippling effect on low-income children in the community and their ability to be ready for school” says Weiss. The funding cuts will take effect June 1st and directly impact the incoming class of 3-year-old preschool students.

Although education will absorb a significant impact from the sequestration, social services across the city will be cut back. San Francisco homeless advocates are forecasting a $1 million cut in federal assistance and AIDS groups have warned that nearly $800,000 dollars in housing vouchers for AIDS patients are on the chopping block. Federal funding for the AIDS Drug Assistance Program (ADAP), which subsidized medical care for AIDS patients, is set to be slashed by nearly 8 percent across the board.

“The sequester is going to dramatically impact the funding for lifesaving services for domestic violence shelters and rape crisis centers, as well as legal service, and children’s programs,” Beckie Masaki, the founder and former executive director of San Francisco’s Asian Women’s Shelter, told the Guardian. Masaki now works with the Asian and Pacific Island Institute (APIDV) on Domestic Violence, where she advocates for more federal funding for domestic violence service providers.

Masaki is worried that the cuts will disproportionately impact the city’s most vulnerable women: low-income and non-English speaking victims of domestic violence, as cash-strapped shelters lay off translators and cut back on outreach and group therapy.

“In the past, when we were facing cuts, we did our best to minimize the impact on survivors,” she explains. “But in this era of constant cuts, it’s going to mean layoffs, and ultimately fewer services for the most vulnerable survivors”.

As lawmakers in Washington scramble to pass a budget deal before the March 1 deadline, the climate of uncertainty leaves local service agencies in a state of limbo. With future funding in doubt, long-term planning and strategizing become increasingly difficult. Yet for many local service providers, the most recent threat of sequestration is a familiar consequence of an increasingly fragile social safety net.

According to Masaki, the sequestration should motivate Congress to rethink its budgeting priorities: “If they invest in these baseline life-saving services for those that are most vulnerable in our community, in the end that is the path to better economic and social sustainability for our whole nation.”