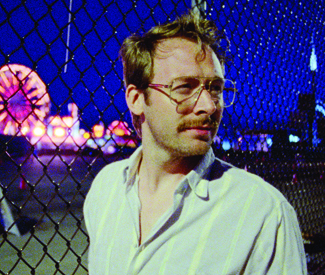 FILM “Go look in the refrigerator.” Normally, that’s not a particularly sinister phrase. But if the fridge in question happens to be sitting in Jeffrey Dahmer’s Milwaukee kitchen, circa 1991, it contains the following: a box of Arm & Hammer, condiments (mustard, ketchup, steak sauce), and a freshly severed human head.

With details like that, there’s no wonder the Dahmer case continues to fascinate, 22 years after his capture (and 19 years after he was bludgeoned to death by a fellow inmate). Chris James Thompson’s The Jeffrey Dahmer Files, a documentary with narrative re-enactments, is savvy to the fact that lurid outrageousness never gets old. It also plays off the contrast between Dahmer’s gruesome crimes and his seemingly mild-mannered personality.

And thankfully, these aren’t cheesy, America’s Most Wanted-style re-enactments. We see Jeffrey (Andrew Swant) going about a mix of mundane and fraught-with-meaning tasks: being fitted for new glasses, eating a hamburger, shopping for 10-gallon drums, and buying way more bleach than one man could possibly ever need. We never see him kill, though we do witness him entering a hotel with another young man — and leaving with a suspiciously heavy suitcase. Swant isn’t a dead ringer for Dahmer, but he has the same “serial killers look like everybody else” quality. It’s unsettling, and goes a long way toward explaining why, as real-life Dahmer neighbor Pamela Bass recalls here, the Jeff she knew (“kinda friendly, but introverted,” Bass says) hardly seemed like a murdering cannibal.

But Wisconsin’s most passionate body-part hoarder (since Ed Gein, anyway) was 100 percent authentic, a fact made abundantly clear to the homicide detective assigned to the case, Pat Kennedy (who made that stomach-turning fridge peek), and medical examiner Dr. Jeffrey Jentzen, tasked with identifying Dahmer’s torn-asunder victims. “We were dismantling someone’s museum,” Jentzen remembers of the crime scene, a tidy one-bedroom in a rough part of town where, months earlier, flippant cops had ushered a dazed teenager back into Dahmer’s clutches, believing his tale that the younger man had stormed out after a domestic spat. Oops.

Since Dahmer is dead and his crimes have been well-documented — in books by Dahmer’s father and others, true-crime specials, and the 2002 narrative film that gave future Oscar nominee Jeremy Renner his breakout role — The Jeffrey Dahmer Files does well to concentrate on people whose lives have been forever changed by the case, two because of their jobs and one due to an unfortunate coincidence. Though Kennedy and Jentzen offer compelling interviews, Bass’ participation is key; unlike the two men, who’ve no doubt told their stories dozens of times before, her emotions still feel raw.

She speaks about getting to know her across-the-hall neighbor — he stood out for being the only white guy living in the Oxford Apartments, a fact made more notable when it was revealed he killed mostly men of color, many of whom were also gay. (As his victims’ families would no doubt agree, if Dahmer’d had a taste for rich white girls, his story would certainly have played out differently.)

Not only did Bass have to deal with the revelation that she’d been living next to a killer (“I remember a stench, an odor”), she found herself surrounded by a media circus, harassed by gawkers, and blamed by strangers for “not doing anything.” Even after she’d moved — the entire apartment building was torn down — the stigma of having been Dahmer’s neighbor lingered.

Kind of like the killer’s own notoriety. Speaking of, the Akron, Ohio house where Jeffrey Dahmer grew up (and committed his first murder) has been on the market for six months. Refrigerator included.