Home No traffic for the rich
WriterTim Redmond
SectionPolitics Blog 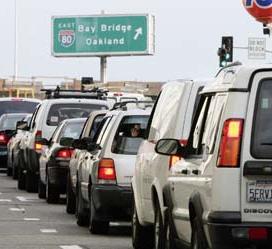 The more libertarian elements of the Bay Area have been complaining for years about carpool lanes on the freeways. If everyone’s stuck in traffic, and those lanes are open, why can’t everyone use them — and cut back on congestion?

Now, heeding those complaints (and moving in the fast lane toward privatization of the highway system), the Metropolitan Transportation Commission is moving to allow single-occupant vehicles to use the carpool lanes — for a price.

So the people who can afford to spent ten bucks extra a day can save time, too — and everyone else has to sit in traffic. A couple of problems with this scenario.

For one thing, the idea that moving more cars to the carpool lane will ease congestion on the rest of the road has no basis in fact or reality. Freeways are like jails — the more you build, the faster they fill up. Double the size of I-80 and soon it will still be as crowded. Build another Bay Bridge and it will be choked with cars in a year. That’s been the entire experience of American highway construction since World War II.

An open freeway encourages people to drive. When the price of waiting in traffic gets high enough, people either use transit or … carpool.

Which is the point of the carpool lanes. If a couple of people leave their cars at home, freeing up space for everyone else and in the process cutting down on fossil-fuel emissions, then they get to ride in a less-crowded lane. The carpool lanes are supposed to be more empty; that’s the idea.

Then there’s this notion of first-class and second-class highway travel.

In a perfect world, people whose time is worth more money would sacrifice cash to get where they’re going, and by sitting in traffic for half an hour less would earn tha extra money back at work, and all would even out. But even the most academic-minded economists know that’s not how the real world works. (Of course, in a perfect world we’d have such fast, cheap and effective transit systems that nobody would drive around the Bay Area at all.)

No: What will really happen is that wealthier people who want to go shopping or out to dinner or whatever and drive without sitting in traffic will get to do that, and poorer people will lose even more of their time to the commute, which they can’t afford to do anyway, and the level of economic inequality in the Bay Area will get worse. So will the air quality.