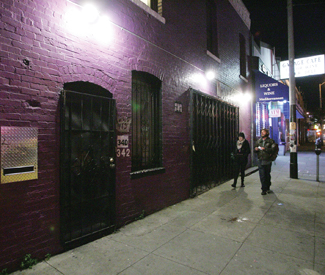 The Western South of Market area is ground zero for the city’s War on Fun, a place where nightlife often comes into conflict with residential expectations, particularly on the raucous 300 block of 11th Street and, to a lesser degree, Folsom Street’s old “miracle mile” of predominantly gay bars.

As the city’s Planning Department and its development community looks to accommodate another 4,000 homes for 10,000 new residents on less than 300 acres of Western SoMa — most of it along Folsom Street between 7th and 13th streets — that potential for conflict could grow in the coming years as funky old buildings give way to shiny new stacks of expensive condos.

And efforts to sort it out may hinge on the future of a 105-year old purple building.

After nearly eight years of work by a unique citizen-led task force, the Western SoMa Community Plan is now before the Board of Supervisors, with the Land Use Committee set to hold its first hearing on Feb. 25. Despite dozens of task force meetings seeking to strike the right balance between residential and entertainment interests, the plan is still being tweaked.

When the Planning Commission approved the plan and some related projects on Dec. 6, it followed King Solomon’s approach of cutting the 11th Street baby in half. The commission heeded the recent recommendation of the nightlife community and District 6 Sup. Jane Kim to modify the plan to prohibit new residential development on the 11th Street block where tipsy visitors to Slim’s, DNA Lounge, and other big clubs clog the sidewalks every weekend. But it also voted to grandfather in a 24-unit residential project at 340 11th Street, which everyone now involved in closed-door negotiations simply calls “the purple building,” a two-story masonry structure built in 1907 that is awaiting demolition.

The building houses light industrial businesses and is the former home of Universal Electric, whose owner, Tony Lo, wants to develop the property. Along with architect John Goldman, Lo submitted a residential project application in 2005, only to have it placed on hold pending adoption of the Western SoMa Community Plan.

“It was well along when the Planning Department put the project on hold,” Goldman told us.

City officials and even many of the nightlife advocates say they sympathize with the long wait that Lo and Goldman have endured, even if many oppose housing on the site and have been urging Lo to find another use for the site, such as an office building.

“They would have no idea what they’re getting into until that first Saturday night,” nightlife advocate Terrance Alan said of the would-be residents of the building, envisioning a young couple who had only visited during daytime hours trying push a baby stroller past the throngs of club-goers. Alan took part in recent meetings Kim facilitated with Lo and Goldman, and Alan told us, “There was, for the first time, a very frank discussion about the problems that owners would experience and the pressure they would put on clubs in the area.”

For example, just one neighbor of Slim’s — a popular live music venue on the block owned by singer Boz Scaggs — has waged a relentless campaign that has forced temporary shutdowns and cost the club more than $750,000 in mediation costs, Alan said, despite the club’s sound buffering and general compliance with local codes.

Alan said that it’s simply unthinkable to add more than two dozen new homeowners to that busy block in a condominium building that only allows access on 11th Street. Alan is hopeful for a negotiated compromise with Lo, something that Kim told us she also thinks is likely.

“I’m hoping we can come to a consensus of the property owners and business owners on 11th street, including the purple building,” Kim said, echoing Alan’s point that, “Just one resident can really shut down a business and hurt its financing.”

Goldman said he understands the concern and “my client is considering alternatives to housing.” While he was a little frustrated that it wasn’t until November that they first heard about a proposal to ban residential projects on the block, “We’ve definitely heard the concerns of the nightlife entertainment folks…No decision has been made yet, but it’s the goal of my client to decide fairly soon.”

A ban on housing is just one of the changes that Alan and other members of the California Music And Culture Association (CMAC) are pushing the supervisors to make to the plan, provisions he was unable to get into the plan as a member of the Western SoMa Task Force for four years before resigning in frustration.

“The task force was made up of people primarily interested in residential development,” Alan told us. “The plan is pretty much about protecting residential.”

That perspective irritates task force chair Jim Meko, who said he held about 60 meetings on entertainment and nightlife issues and bent over backward to accommodate that community. “Overall, the Western SoMa Plan is very friendly to the entertainment industry,” Meko said, noting that the plan grandfathers in all existing nightclubs, even after a building is demolished, and requires new residential construction to buffer against street noise. “They’re never satisfied.”

But Meko does concede that accommodating existing residents and new residential development was central to the task force’s work, as it was charged with doing by the Planning Department. “The most important thing was to do no harm to anyone,” Meko said was the guiding philosophy behind the task force’s approach. “We’re the real test case for a mixed use community in the city.”

While Folsom Street has more bars that 11th street, and those bars will be protected under the plan, Meko said the idea was to keep them limited in scale and prevent the proliferation of large clubs that operate into the wee hours.

But he also doesn’t think it makes economic sense for many clubs to open there anyway. With allowable height limits in that corridor being increased from 50 feet now up to 65 feet, and with the plan’s approval allowing development projects to move forward, many of what he called the “old junky buildings” where clubs could find cheap rent will likely be demolished.

“With the height increases, those buildings are going to be history in five years,” Meko said.

Kim said she is supportive of both nightlife and the plan’s facilitation of residential development.

“It’s transit-first and a good place to be able to handle the density that’s close to downtown,” Kim said, noting that she’s supportive of even the massive residential project proposed for 801 Brannan Street, mostly because it includes units with up to two and three bedrooms and an elegant design by architect David Baker.

That project would have 432 housing units with a total of 606 bedrooms, 22,124 square feet of retail, and a 422-car parking garage on a site of just over four acres. In many ways, it is typical of the housing density that will begin to crowd into Western SoMa.

Meko was critical of how the entertainment community was able to make changes to the plan after all the hard work of the task force, and he told us, “It was a choice Jane Kim had to make, and she will have to answer to her constituents in the future.”

But Kim said the change on 11th Street made sense and that it’s important to strike a balance. “Entertainment is clearly an important part of Western SoMa and 11th Street is unique in showcasing that community,” Kim said.

Alan and Glendon Hyde — an LGBT activist who, like Meko, ran against Kim for D6 supervisor two years ago — are also pushing for other changes in the rules governing nightlife in SoMa, including who can get the limited live music permits that the city issues and extending the 10pm curfew in those permits.

“I think small businesses throughout the district should be able to use the limited live music permits, and they’re available only on Folsom Street under the plan,” Hyde told us, noting that otherwise he thinks nightlife fares well until the plan, particularly after Kim’s intervention on 11th Street.

Kim said that she in reluctant to start tweaking too many provisions of the plan, which she characterized as a separate discussion that doesn’t have to happen now: “I’m open to further discussions after we get the plan passed.”

The Western SoMa Plan was broken off from the larger Eastern Neighborhoods Plan by then-Sup. Chris Daly in 2005 to let a citizen-based effort tackle this area’s unique challenges, and Kim said the plan is a testament to the diligent efforts of Meko and a diverse set of members.

“I think it was a really good process with lots of stakeholders involved,” Kim said. “I like the balance. I’m happy.”