Home Love for women flows through the streets of San Francisco 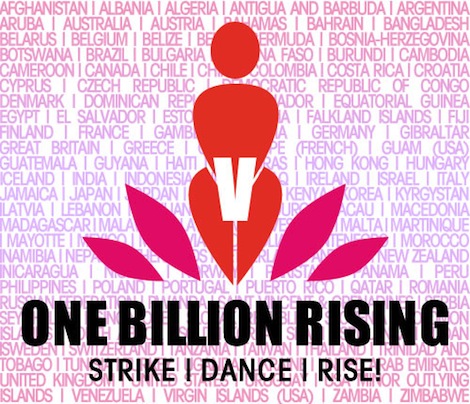 Can you feel the love, San Francisco? Cuz it’s flowing through the streets right now, taking many forms on this unusually busy and politically active Valentine’s Day, with a strong theme of protecting the interests of women.

As I write these words, hundreds of SEIU Local 1021 members – many clad in Cupid-inspired costumes – are rallying outside the San Francisco Department of Human Resources office at 1 South Van Ness. They’re calling for the city not to slash the salaries of 43 different city job classifications that are disproportionately staffed by women and minorities (check my story in this week’s paper for details on that issue).

Meanwhile, over in Dolores Park, members of the Mission Rising collective are massing up amid live bands and other festivities and preparing to dance their way through way through the Mission this afternoon en route to join us with the One Billion Rising movement protesting violence against women and girls in all its many forms. Check the One Billion Rising website for live feeds from about 200 events around the world.

The biggest local manifestation of that global event will start at 4pm outside of City Hall, with speakers and a massive flash mob dance party at 5:30pm (as the Guardian’s Rebecca Bowe reported yesterday, the One Billion Rising event will even include a flash mob dance party within San Francisco County Jail, as well as an event at 3pm in Union Square focused on migrant women).

Or if you prefer your flash mob madness to be politics-free, there’s always the annual Valentine’s Day Pillow fight in Justin Herman Plaza at 5:30pm, which is always a feather-filled good time. However you choose to spend your day, do it with love.