Home The end of Joe the Rat 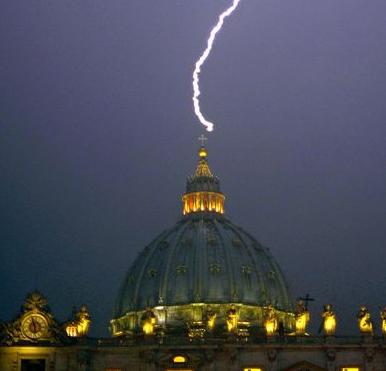 I grew up in the Catholic Church, went to Transfiguration Carmelite School, got beaten with a ruler by the nuns, had a priest try to teach us sex ed, and was so turned off by it all that by high school I was a committed atheist. But I have always maintained a fascination with the Church, the Pope, the Roman Curia and the whole deeply secretive Vatican operation, which makes for some of the most amazing conspiracy theories in the world.

And now there’s a new one — why did Pope Benedict, Cardinal Ratzinger, the guy known by Catholics facing his Inquisitional wrath a Joe the Rat — do the unthinkable and quit?

Did you know that lightening hit the Vatican just hours after he made his announcement? Does that mean the God (s) on high are/were happy — or angry?

Is he fleeing a new child-abuse scandal? Is there something else we don’t know? Does it have something to do with the Prophecy of Bishop Malachy in 1140? Was it the Knights Templar?

Or is the guy really just too old and tired to live up to the fact that he’s been a failure as a leader of a church that is in serious decine in all but the developing world, where its current growth won’t last?

The Catholic Church is has for much of the past several hundred years been a creature of the Western, developed world — where even Catholics don’t take its teachings very seriously any more. Nobody in Europe or North America wants to be a priest in a religion where celibacy is mandatory, women are second-class citizens, and the theology you’re supposed to teach is so horribly retrograde that 90 percent of the parishoners think it’s perfectly fine to ignore it. The median age of Catholic priests in this part of the world is about 65; that’s really not a sustainable situation.

When I was growing up, Catholic families looked at Pope John XXIII as a revered figure who brought the Church into the modern age; people talked about the Second Vatican Council the way they talked about politics, which, of course, it was, and there was a feeling that the members of the Church — the ones, after all, who pay for the whole thing — might have something of a say in how it was run.

But as the rest of the world moved forward, the Church moved back. The child-abuse scandal was just the outcropping; the Church was run by a clueless bunch of old white guys who became more insular and more conservative as the people who attend their church became more progressive and more interconnected. Now most of the Catholics I know think the Pope is a doddering old fool who has no idea what the world is like. Hell, he’s attacking the nuns because they aren’t homophobic enough.

The Catholic Church remains popular in parts of the developing world, but that’s not going to last. Either the leaders of this religion are going to realize that their ancient dogma has nothing to do with the actual teachings of Jesus and everything to do with money and power (would Jesus really object to gay marriage? Really?) and start to change — or the next Pope will, indeed, oversee the decline of his mission.

Maybe Joe the Rat didn’t want it to happen on his watch.