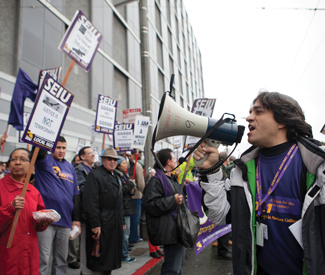 Service Employees International Union Local 1021 strenuously resists the wage and benefit givebacks regularly demanded in recent years by employers, including the city of San Francisco, which is now trying to slash the salaries for more than 40 city job classifications.

At the same time, Local 1021 is asking its own employees for benefit givebacks during new contract negotiations, a move that their own union is blasting as hypocritical.

That has squeezed Local 1021 President Roxanne Sanchez and her leadership team into a difficult position. They must fend off a revolt from staff that is turning vitriolic, without offending members who are in some cases worse off than the SEIU employees who represent them — all without weakening the union’s position at the bargaining tables with employers that relentlessly work to undermine the labor movement.

And they have to do it in the middle of an internal union election that they need to win to stay in power.

“The irony here is SEIU works assiduously to avoid takeaways in their contracts with employers and here they want givebacks from their own sweatshop-type working conditions,” says Libby Sayre, area director for Communications Workers of America Local 9404, which has represented SEIU Local 1021 employees since an internal reorganization in 2007. “It’s time for them to put some of their union principles into play.”

Local 1021 is proposing to increase how much employees pay for one of their health plans, eliminate the 401(k) pension match, and change some work rules, while keeping salaries where they’ve been stuck for many years. Employees say the givebacks total $416,000, and they’re coming even as the union maintains healthy reserves of about $11 million (the union says that level is now closer to $9 million).

“These are proposals they wouldn’t accept from an employer and they’re trying to impose them on their own employees,” Sayre told us. “It’s not justifiable. It’s not like this is a union in collapse.”

Yet Sanchez and her team, including Political Director Chris Daly, say the internal revolt led by a small number of disgruntled employees misrepresents how good the workers actually have it, particularly compared to members who have endured severe layoffs and salary and benefit cuts in recent years. Employees have another generous pension on top of the 401(k) (paying 2.5 percent of final salary per year worked), employer-paid health benefits (costs would go up for the PacificCare plan, but not Kaiser), normal step salary increases, and bonuses in lieu of raises in each of the last two years.

“Our staff has not given up anything,” Sanchez said. “They saw us cut the board’s budget by several hundred thousand dollars before we asked for anything.”

She said that with dues revenue falling along with membership numbers, and pension and health care costs rising steeply, the union can’t afford to keep dipping into its reserve funds, as it has in each of the last two years.

“We’re asking them to give modestly to their health care costs, and that we don’t pay for that second pension,” Sanchez said. “We are not balancing the budget on their backs, like what gets done with us.”

While both Daly and Sanchez admit the local has healthy reserve funds for its budget level, they say that’s necessary for the union to project strength, whether it be threatening a strike at the bargaining table or taking on ballot measures that would cripple the labor movement, such as last year’s Prop. 32, which the local dug into its reserve funds to fight.

“If we didn’t have healthy reserves, we’d be coming at them for more [givebacks] and doing layoffs,” Sanchez said.

While Sanchez said she resents being compared to the employers that her union battles, her rhetoric about the need for fiscal discipline is echoed by city officials who say they are already being generous with workers and they can’t afford to continue paying salaries that are so far beyond market rates.

“The city has to look at all the costs and be fiscally responsible and prudent,” said Susan Gard, a spokesperson for the city’s Department of Human Resources. “We don’t have the luxury of just looking at what’s best for employees.”

As allowed by the two-year contract Local 1021 reached with the city last year, DHR did a study comparing local salaries with eight other jurisdictions, finding that positions such as social workers, clerks, secretaries, custodians, and nursing assistants were between 16 and 48 percent above the Bay Area average. So the city is seeking to lower the salaries in 43 job classifications (applied to new hires only) and raise them for four classifications. The proposal will go before an arbitrator for a decision early next month.

Gard said the increases take into account San Francisco’s high cost of living and historic desire for pay equity, so most increases are less than half of the pay differentials the survey revealed. “They would all still be above market rates,” she said.

But Local 1021 officials say most of these positions had their salaries deliberately increased back in the 1980s and 1990s as part of an official city policy promoting pay equity for jobs often held by women and minorities. Even though that provision was removed from the official City Charter in 1996, they say it remains an important city policy.

“The city is rolling back decades of historic work on pay equity in this city,” Daly said. “We were concerned about equal treatment of workers who were disproportionately women and people of color.”

To highlight that pay equity issue, Local 1021 is planning a rally on Feb. 14 at noon outside DHR offices at 1 South Van Ness Avenue. Gard denies that the DHR proposal rolls back pay equity advances: “The city is committed to that principal, equal pay for equal work, and we don’t think our proposal erodes that.”

Sanchez said Local 1021 employees are undermining the union’s position in fights like this one, but they say the local needs to recognize and reward their work rather than justifying givebacks by comparing employees to members. “We don’t want to play the ‘our benefits are better than X-group’ games,” Nick Peraino, a 1021 researcher and CWA steward, told us. “We work very hard on behalf of the membership.”

Sayer accused Local 1021 leaders of arrogance and told us, “There is an attitude problem on the bargaining team and a reality problem on the part of the local,” a tone that that Sanchez sometimes mirrored when talking about the CWA campaign against her leadership.

Yet such vitriolic rhetoric may have as much to do with internal union politics as it does a true impasse. The leaders of the revolt by SEIU employees recently tried to decertify CWA and go with more forceful representation, a vote they lost badly but which may have spurred CWA to toughen its approach. Similarly, after SEIU members have accepted some bad contracts in recent years, some members may resent the organizers. Sanchez stressed how Local 1021 is member-led and responsive to the needs of workers, despite the current conflict.

“We want to make this organization good and strong,” Sanchez said, “and you can’t do that if you’re screwing over someone.”