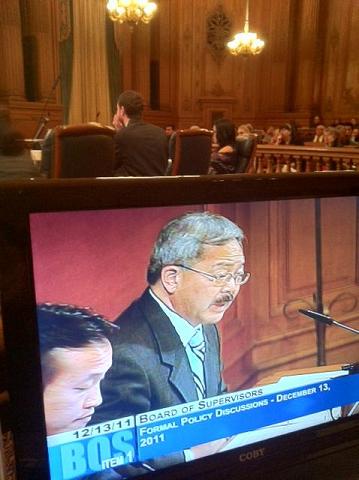 UPDATED When Mayor Ed Lee appears before the Board of Supervisors this afternoon (Tues/12) for the voter-mandated monthly “Formal Policy Discussions” (aka Question Time), he will be asked a couple of good, relevant questions with no easy answers. This is exactly what voters and progressive supervisors intended, a serious policy discussion, rather than sterile, hollow ritual that our current crop of politicians have turned it into.

The first question is by Sup. Eric Mar, who asks, “The Municipal Transportation Agency recently released its Draft Bicycle Strategy, which lays out an aggressive plan to upgrade San Francisco’s bicycle facilities. It supports biking for everyone, including seniors, families, and persons with disabilities. However, I am hearing growing concerns both in my district and city-wide about the mismatch between verbal commitments to better bicycling and budget realities. Currently, bicycle projects account for just 0.46 percent of all MTA capital. This is not enough to get us to the goals laid out in the Bicycle Strategy. How will you fund the Bicycle Strategy to make San Francisco a national leader in bicycling safety and use?”

Great question! This report, which came out in December, has the modest, realistic goal of increasing the share of vehicle trips taken by bike from 3.5 percent last year up to 8-10 percent by 2018. That already seems to abandon the official city goal – heavily touted by Lee and Board President David Chiu – of 20 percent by 2020. But even this new plan isn’t fully funded, so the question is simply asking the mayor whether he will put his money where his mouth is.

The second question comes from Chiu, who is trying to find a way to mediate the very real and challenging dispute between the city’s renters and those trying to convert more apartments into condos. Understanding where Lee stands on the issue is important to solving this problem, and Chiu’s question seems to genuinely seek guidance from the chief executive.

He asks, “Mr. Mayor, the Board of Supervisors is considering legislation to allow existing owners of Tenancies in Common (TICs) to bypass the condominium conversion lottery and be converted after the payment of a fee. I recently asked supporters of the legislation and tenant advocates to engage in negotiations, which Supervisor Farrell and I are hosting.

“What is your position on this pending legislation? What protections would you support to prevent the loss of rent-controlled housing in our increasingly unaffordable city? How would you address the concern that if we allow the current generation of TIC owners to convert, we will replace then with a new generation of TIC owners and additional real estate investments that will lead us right back to an identical debate within a short time?”

Again, excellent questions that go right to heart of one of the central struggles facing this city: Who gets to live here? And given Lee’s role in relentlessly promoting taxpayer-subsidized economic development strategies that are gentrifying the city and fueling this clash, one could argue that he has a moral obligation to help find a solution to this problem, or at the very least to say where he stands so voters can judge him accordingly.

Mayor Lee received these questions last week, so he and his staff have had plenty of time to think about them and prepare real, substantive answers. Will we get real answers or just the normal political platitudes that kick the can down the road in dealing with these pressing problems? We’ll see. Tune in at 2 pm to SFGOVTV to watch yourself, or check back here later and I’ll tell you what Mayor Lee said.

“I can’t say that I have a magic solution to this issue that will make everyone happy,” was how Mayor Lee answered Chiu’s question about the condo lottery bypass legislation, after saying he understood the positions of TIC owners who want to convert to condos and tenant groups concerned about the loss of what he called “the precious few rent-controlled units.”

Lee said he hopes that the two sides can find a “consensus solution” to the problem, which seems to indicate that he does indeed believe in magic considering the diametrically opposed viewpoints of the two sides and the zero sum game this issue represents. Afterward, I told the mayor that he didn’t seem to take a position on the issue and asked him to elaborate on what should be done, and he maintained that, “I actually did take a position, even though it didn’t sound like it, because I actually believe they have good points on both sides.”

Yet when KCBS reporter Barbara Taylor tried to help discern what that position may be, asking whether we could at least say that Lee didn’t support the legislation in its current form, he wouldn’t even agree to that weak stance. No, his position was that both sides have good points, even though they’re opposing points, and he’s hoping for the best. Next question.

Lee didn’t provide a clear or responsive answer on the bike question either. He reiterated his support for cycling improvements and said, “SFMTA’s prime responsibility is to ensure the streets are safe for all San Franciscans, and that includes bicyclists.” And he tried to dispute Mar’s point about how less than a half of 1 percent of the agency’s capital budget goes to bicycling improvements.

“To look at the percentage might not tell the whole story,” Lee said, citing how the SFMTA and the Transbay Joint Powers Authority are now seeking about $40 million in state and federal grants for transportation projects that would include cycling infrastructure improvements.

And that might have seemed like a somewhat responsive answer to the casual listener who isn’t aware that the price tag for improvements identified in the SFMTA Bicycle Strategy total about $200 million, of which the agency has only identified about $30 million in available funding. So the question of “How will you fund the Bicycle Strategy?” remains unanswered.

Perhaps it was too much to expect straight answers from a politician.