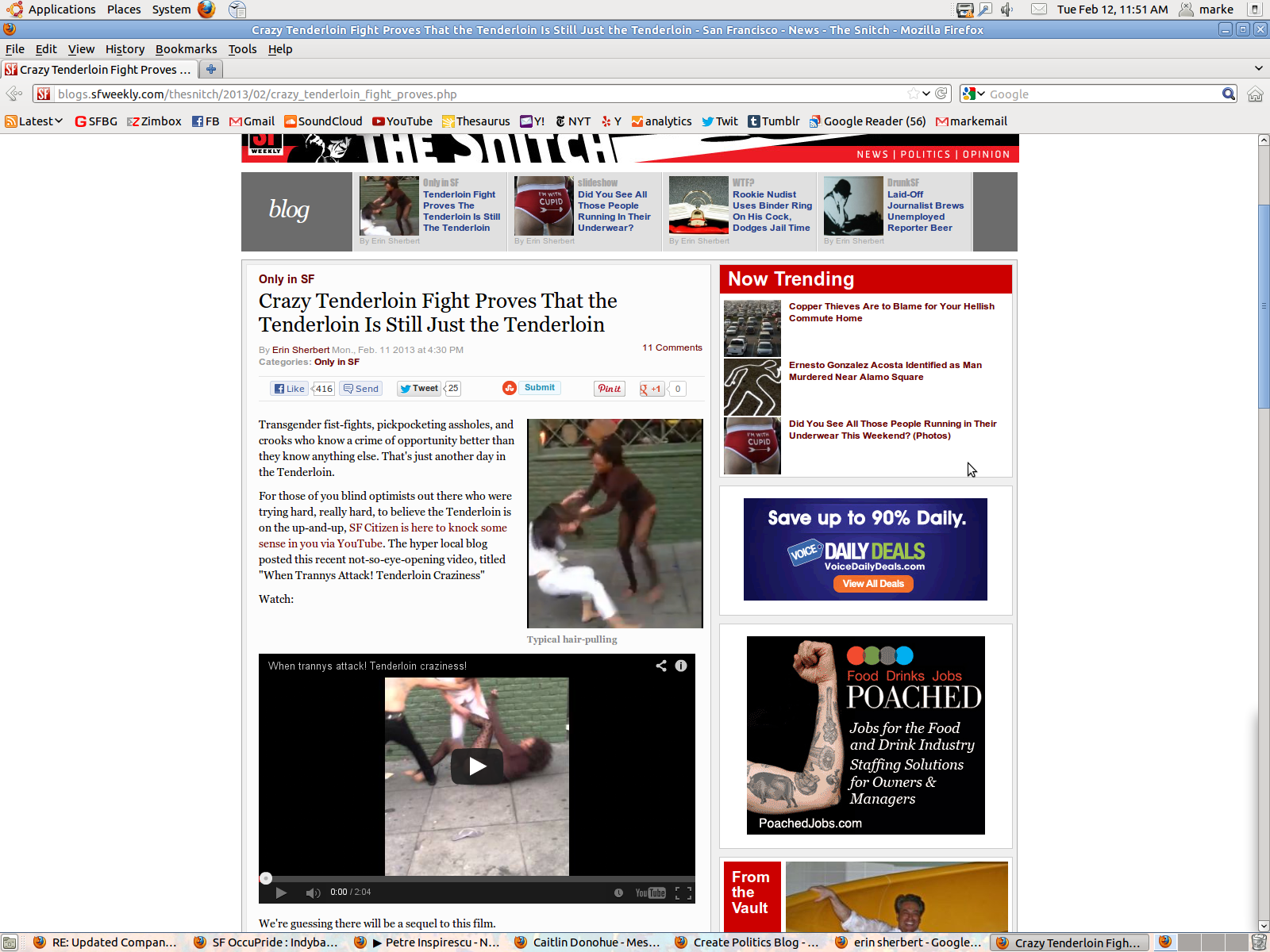 Oh hey, isn’t it funny to watch (possibly) transgender people get punched in the face and repost a video of it that calls them “trannies” insultingly, without comment? What a barrel of laughs to compare transgender people to “pickpocketing assholes and crooks who know a crime of opportunity better than they know anything else.” Well hey, to SF Weekly online news director Erin Sherbert, it’s “Just another day in the Tenderloin!“

In a post today on the Weekly’s Snitch blog entitled “Crazy Tenderloin Fight Proves That Tenderloin Is Still Just the Tenderloin,” Sherbert, who’s actually called attention to inequality in the past, gives into her unfunny sterotyping and sensationalistic link-baiting impulses and posts a YouTube video recorded a week ago that shows three people fighting in the Tenderloin — two of them possibly transgender (Sherbert offers no evidence of this) — and many horrifying punches to the face. Just so we can LOL with privilege! Here’s the full text of her post.

Transgender fist-fights, pickpocketing assholes, and crooks who know a crime of opportunity better than they know anything else. That’s just another day in the Tenderloin.

For those of you blind optimists out there who were trying hard, really hard, to believe the Tenderloin is on the up-and-up, SF Citizen is here to knock some sense in you via YouTube. The hyperlocal blog posted this recent not-so-eye-opening video, titled “When Trannys Attack! Tenderloin Craziness.”

I can’t even touch the ignorance of any of the above, so I’m just gonna adjust my wig and leave it all there on the dirt floor like the mess it is. I will point out, however, that this comes at a particularly tone-deaf time, when local trans leaders are launching an historic campaign for medical equality and benefits rights. I will also point out that the SF Weekly, in the past, has maintained a pretty impressive record of covering transgender issues — and isn’t really that hard up for web hits, either. I’ve contacted Sherbert for comment and will update when I hear from her.

UPDATE: I reached out to Erin again, asking her if she was planning to comment. Her response: “no”