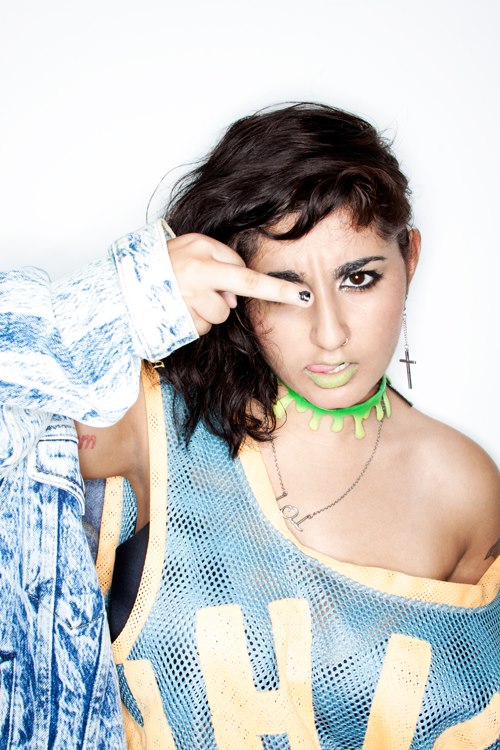 East Bay rapper Chippy Nonstop is meant to be seen as much as heard. Last fall’s “Money Dance” single off the Money Dance 101 EP was made exponentially better by the club-worthy video accompaniment — which has since racked up more than 45,000 views on Youtube in three months — created by Jon Smiff, with beats managed by producers DJ Twostacks and Grave Goods.

In the video, Chippy and pals including Friendzone, and members of the Yung Klout Gang and Trill Team Six, wearing beanies, scout uniforms, ripped denim booty shorts, and neon nails, hang out in a suburban hood as Chippy’s nasally tone requests that we “do the money dance” over a trippy beat, until they eventually end up at the club, where they belong. It was a followup to the spacey banger that first caught the web’s attention — “Kicked Out Da Club,” which boasted an equally awesome video.

Her output thus far is mostly web-based, including singles and EPs on Soundcloud and Bandcamp, and right-now-specific videos — that’s what makes her so of the moment. She’s a young music-maker, employing simply her own computer (Ableton, Protools, Logic) and vocals. She’s a prolific tweeter (83,000 tweets and counting), who until recently seemed to be bitching about school as much as she was hyping her own crew, though most of her Twitter love goes to fans, whom she often retweets.

And with that, she’s provocative, demanding of attention, while maintaining the casual-fun style of your old neighborhood crew, albeit in a far flashier package. In this rapid www.world, pop news is often stale a week out, which is what makes Chippy stand out — you can’t help but follow her bopping head and twerking booty for fear you might blink and miss the next step.

What you like most about the Bay Area music scene: People are free, have fun, don’t give a fuck, dance like crazy, mosh, smile, don’t care about what other people are thinking about them.

What piece of music means a lot to you: M.I.A., “Galang.” Because it was the first song I heard by M.I.A and it was by a brown girl and it was weird and fun, and that’s the shit I wanted to fuck with.

Favorite local eatery and dish: Old Siam on Ellis and Mason, because it’s Yung Klout Gang Headquarters for our meetings when we are all in town. #YKG. Green Curry, Pad See Ew also.

Who would you most like to tour with: Rihanna, hypothetically. Major Lazer so I can linger Diplo. Grimes because she’s amazing. Brooke Candy, because she’s also amazing. But also some of my friends so we can get crazy on the tour together like Kitty and Antwon, but obviously they are both very talented too.