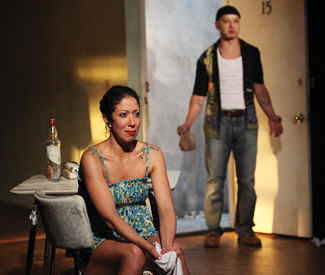 THEATER A filthy, forlorn world emerges in surreal half-light at the outset of Magic Theater’s premiere of Se Llama Cristina, the new play by celebrated San Francisco–based playwright Octavio Solis. But almost as quickly, its initially intriguing outlines begin to look artificial, becoming the bloated lines of caricature more than a poetical evocation of real life, as the sentiment at the heart of this sometimes forceful but finally thin and frustrating play steadily takes over.

It’s odd and somehow appropriate that the two wayward characters at the center of the story — an at first nameless Woman (a vital Sarah Nina Hayon) and Man (a sympathetic but inconsistent Sean San José) — so aimless and rootless in their own lives, find themselves confined to the same dingy drug- and trash-strewn apartment (nicely realized by set designer Andrew Boyce and lighting designer Burke Brown), with initially no conception of where they are, who they are, or how they are related — let alone the meaning of the baby crib in the corner with a piece of fried chicken in it.

In this shabby environment, time and memory and biography all collapse and rise again as if within the ether of sleep or a heavy nod. Checkered histories and nervous dispositions slowly present themselves in a compact but oversaturated 80 minutes of dialogue that, at its best, pivots bracingly between horror and hilarity, with a rough lyricism that is a trademark of Solis’s border-town noir aesthetic. Soon a jilted villain named Abel (a very able Rod Gnapp) appears, incarnating the menace in the air. Also in the room is the possibility that the Man and Woman are about to be parents — or are already — which throws further fuel on the fire of their desperate coupling.

When, near the end, a young woman (Karina Gutiérrez) blows into this increasingly claustrophobic and wearying ménage, it’s like a breath of fresh air — and that is almost literally so, since she enters through the window. We could take her monologue as the voice of their daughter, the Cristina of the title, from some not too distant future. But whether or not we do, her impact is transformative in a way more or less synonymous with parenthood: presenting the couple with the possibility of a salvation at once of their own making and a gift from beyond — a kind of daughter ex machina.

If the details of the couple’s situation are better left subject to dream-logic than to a realistic accounting of probabilities and physical possibilities, it’s nevertheless true that the play suffers from an erratic need to fill in gaps. Among other things, that can lead to dialogue overburdened by exposition and back story (as in the Man’s graceless retelling of his self-exile from romantic attachments). Less would have been more. In director Loretta Greco’s staging, the awkward tension between the violence and despair of circumstance and an almost impatient rush toward love and hope is sometimes apparent in performances that can betray an uncertain balance between comedy, violence, and dread. In a scene where the Woman appears about to birth her daughter into the wicked, greedy mitts of Abel, the visceral, sexual, messy heat of the dialogue feels at odds with the somewhat guarded blocking of the actors. That said, there are moments in which a potent balance of elements reigns, as when Abel appears as the Telephone Man, threatening a total domination of the couple’s fate. It’s spooky, funny, surreal, and convincing at once.

In the end, however, the stakes never feel high or real, despite an almost too-insistent ladling on of gory detail, foul language, and teeth bearing. Like the impetuous verse scrawled on the back of Cristina’s sonogram image by her wannabe-writer father, Se Llama Cristina is ultimately a passionate poem to the deliverance that a child can offer her parents. But it’s scribbled too hastily and self-consciously in the hand of a playwright whose best instincts balk at the maudlin habit it encourages. *